24-Sep-2014 8:15 AM EDT, by Ohio State University Center for Clinical and Translational Science 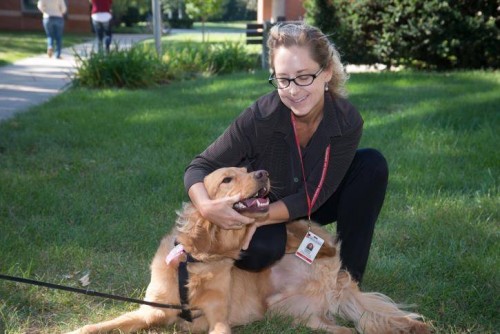 Veterinary oncologist Cheryl London led studies on a new cancer drug for dogs. Her findings helped in the design of human trials testing a similar drug.

Newswise — Columbus, OH. Dogs suffering from certain types of blood cancers may have a new treatment alternative thanks to the collaborative work of cancer experts looking for options that can help both humans and their pets. The drug, Verdinexor (KPT-335), works by preventing powerful tumor suppressing proteins from leaving the nucleus of cells, an exodus which allows cancer to grow unchecked. It’s the first new therapeutic option for dog lymphoma in more than two decades, potentially offering vets another alternative for treating the disease, which is the most common form of canine cancer.

“Verdinexor is a really different from chemotherapy, the current standard of care for lymphoma. It works by blocking a protein in the cells responsible for shuttling other proteins in and out of the nucleus, resulting in disruption of cell survival and eventual cell death ,” said veterinary oncologist Cheryl London, DVM, PhD, The Ohio State University College of Veterinary Medicine, who led preclinical, Phase I and Phase II studies of Verdinexor. “Verdinexor could give veterinarians another option if first-line chemotherapy fails or as a potent adjunctive therapy.”

Preliminary studies of dogs with newly diagnosed or relapsed T- and B-cell Non-Hodgkin’s Lymphoma showed that the drug either stopped or slowed tumor growth in many cases, with over 30 percent of dogs experiencing regression of disease. London notes that another critical difference in Verdinexor is that it’s an oral medication, which could make it easier for owners to administer.

“A cancer diagnosis is tough on dogs and their owners. Dogs with lymphoma must go to a veterinary office weekly to receive chemotherapy infusions,” said London. “Since Verdinexor is a pill that can be given at home, it could help make treatment less traumatic for everyone.”

Dog DiscoveryThe similarities in the ways human and canine cancer drugs are researched and used are not coincidental. Many types of human and canine cancers are identical at both the cellular and molecular levels, making companion animal studies an ideal place to test drive experimental compounds that appear to have anti-cancer characteristics.

As one of the few veterinary oncologists in the nation who has funding from the National Institutes of Health to research drugs like Verdinexor, London worked in parallel with researchers at Ohio State’s James Cancer Center and Solove Research Institute, who were studying Selinexor (KPT-330), an experimental drug for the treatment of human lymphomas.

Selinexor is a slightly different formula than Verdinexor, but has a similar mechanism of action that helps prevent the depletion of protective tumor suppression proteins inside cells. London’s findings on KPT-335 helped inform the design of Ohio State’s Selinexor human clinical trials.

“We conducted our Phase I study first, and then shared our data on optimal dosing and regimen, which the human trials adopted,” said London. “We also observed that some dogs experienced a loss of appetite on the drug, so we developed a steroid-based protocol to successfully offset that side effect. Researchers running the human trials were able to anticipate that side effect and proactively manage it as well.”

London notes that this kind of information sharing between veterinary and human oncologists was virtually unheard of ten years ago, and that it’s helping make the drug discovery more efficient.

“When we exchange real time information, we can all make smarter clinical decisions. We avoid wasting time pursuing a compound or regimen that is ultimately going to fail,” said London. “It’s a real testament to where we are with integrating technology, information transfer and translational science. It’s the blueprint for how we can make drug discovery more efficient and successful.”

Minor use status, more studiesRecently, the US Food and Drug Administration approved a portion of Verdinexor’s new animal drug application for “minor use”– a designation similar to “compassionate use” in humans. This conditional approval requires the manufacturer, Karyopharm Therapeutics, to conduct pivotal trials within the next five years. However, London says that once manufacturing processes for the drug are established, some veterinary oncologists may be able to access Verdinexor in about a year.

After the pivotal trials are conducted, London hopes to conduct more research on the efficacy of Verdinexor to treat other types of canine cancers such as melanoma. (see preliminary in vitro data here)

Studies on the human side continue, with several ongoing open- label Phase I studies analyzing Selinexor use with different hematologic cancers.

London says her team is already in talks with another institution to conduct whole genome sequencing to see which types of dogs and cancers are more likely to respond to Verdinexor – information that will likely also be used to inform human studies of Selinexor and other drugs with a similar mechanism of action.

“When it comes to cancer, dogs and humans have so much in common,” said London. “I think as human medicine becomes more personalized through the use of genomics, I think we’ll see the same happening in vet medicine.”

Clinical trials using Verdinexor were supported by Ohio State’s Comparative Animal Core – a centralized system that offers scientists access to a large group of pets and owners who are willing to participate in pre-clinical and translational research. The CAC was established by London and fellow veterinary oncologist Dr. William Kisseberth with funding from The Ohio State Center for Clinical and Translational Science (CCTS). The CAC currently manages all canine cancer clinical trials conducted at Ohio State’s Veterinary Medical Center and is now also supported by Ohio State’s Comprehensive Cancer Center. 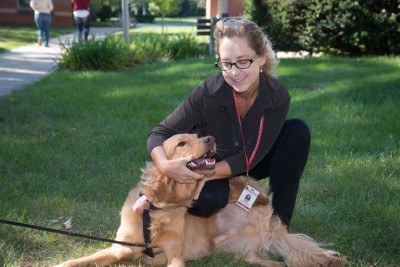