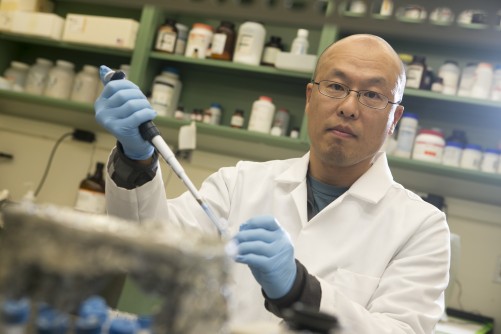 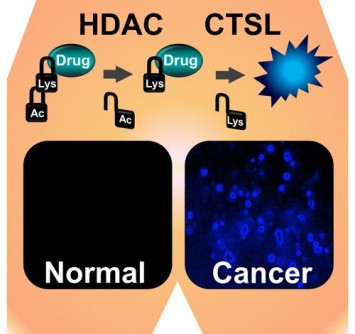 Newswise — STONY BROOK, NY, November 5, 2013 – Cancer drugs work because they’re toxic, but that’s also why they afflict healthy cells, producing side effects that can compromise their efficacy. Nobuhide Ueki thinks he may have found a way to get the drugs to selectively target only the cancer cells, and his team’s patent-pending research is the subject of a paper entitled “Selective cancer targeting with prodrugs activated by histone deacetylases and a tumour-associated protease,” to be published on November 5 in Nature Communications.

Dr. Ueki, a research scientist in Stony Brook’s Department of Molecular Genetics & Microbiology, was studying a protein in the lab to better understand the basic mechanism of cancer formation at the cell biology level. During the investigations, his team discovered that all the cancer cells it tested had very high activity of two particular enzymes, histone deacetylase (HDAC) and an endogenous protease called cathepsin L (CTSL). “We wondered if we could develop drugs to target those two enzymes to make a better anti-cancer drug,” he says.

The Stony Brook team took advantage of a substrate, or chemical tag, that was developed by a German group, making a crucial modification to develop a prodrug that is cleaved, or removed, by the two enzymes. By attaching this chemical tag—a short peptide that conjugates a key amino terminal—to the cancer drugs, normal cells are protected, as only cancer cells have the ability to cleave the masked prodrug and release the medication. Prodrugs are precursors of the intended drug, used to improve the efficacy of the primary drug and to enhance how selectively that drug interacts with non-targeted cells.

The researchers’ approach to selective cancer therapy capitalizes on the increased HDAC and tumor-associated protease activities in malignant cancer cells. By coupling an acetylated lysine group to puromycin, a masked cytotoxic agent is created. This agent is serially activated by HDAC and CTSL, removing the acetyl group first and then the unacetylated lysine group, liberating the puromycin. The agent selectively kills human cancer cell lines with high HDAC and CTSL activities.

“This cancer-selective cleavage of the masking group is a promising strategy for the next generation of anticancer drug development, and could be applied to many other cytotoxic agents,” says Dr. Ueki.

Dr. Ueki and his team hope their effort will attract the attention of pharmaceutical companies and other researchers, motivating them to make their own compounds using this technique. “Sometimes drug companies give up on a drug because it is so toxic,” he says. “If they can use this technique, they might be able to use their drug again. The more new drugs are developed, the more chances of successful treatment are increased. That’s our purpose.”

Dr. Ueki believes the substrate can have wider use beyond its test with puromycin, which was chosen for its extreme toxicity to prove that the compound worked. “The compound requires a chemical conjugation, so on occasion there might be some structural hindrance,” he says. “But in theory, it should attach to other drugs. That is the advantage of this approach—it may have a wide range of applications in the future.” Dr. Ueki envisions another potential use for the compound could be as a tool for marking cancer cells in imaging applications.

The SBU team is currently modifying the compound to achieve greater efficiency. It is addressing how the drug behaves in the body, its “pharmacokinetics”—the interactions of a drug and the body around its absorption, distribution, metabolism, and excretion. “It’s a prototypic compound at this point,” Dr. Ueki says. “It needs to be refined and improved.”

That optimization, just like the original discovery, is an interdisciplinary effort that cuts across Stony Brook’s Department of Molecular Genetics & Microbiology and Department of Chemistry.

“We had a strong collaboration with the chemistry department,” Dr. Ueki says. “Myself and Professor Michael J. Hayman in Molecular Genetics & Microbiology worked with Professor and Chair Nicole S. Sampson and PhD candidate Siyeon Lee in Chemistry [all four are credited as authors on the paper]. Without their help, we couldn’t have done this research. They are very talented in making compounds and purifying them, and they have the capacity to produce these compounds in the large amounts we needed for the studies.” 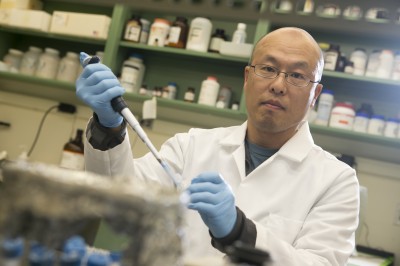 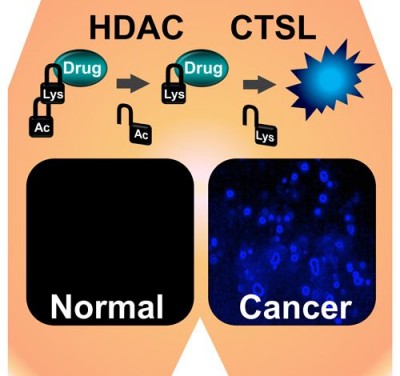