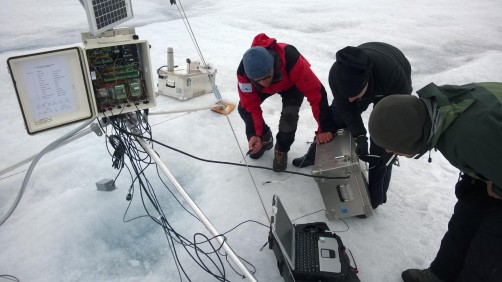 Researchers service one of PROMICE's automatic weather stations on the Greenland ice sheet that was used in the study.

Newswise — TORONTO, April 1, 2016 - A new study by researchers from Denmark and Canada's York University, published in Geophysical Research Letters, has found that the climate models commonly used to simulate melting of the Greenland ice sheet tend to underestimate the impact of exceptionally warm weather episodes on the ice sheet.

The study investigated the causes of ice melt during two exceptional melt episodes in 2012, which occurred from July 8 to 11 and from July 27 to 28. During these exceptional melt episodes, which can be regarded as an analogue to future climate, unusually warm and moist air was transported onto the ice sheet. During one episode, the researchers measured the ice sheet melting at more than 28 cm per day, the largest daily melt rate ever documented on the ice sheet. While the two brief melt episodes only lasted six days combined, or six per cent of the melt season, they contributed to 14 per cent of the total melt.

Using the Programme for Monitoring of the Greenland Ice Sheet (PROMICE) automatic weather station data, the researchers ranked the energy sources contributing to surface melt during 2012 at twelve PROMICE sites around the ice sheet periphery. While ice sheet melt is usually dominated by the radiant energy associated with sunlight, the researchers found that the energy associated with air temperature and moisture content, rather than radiant energy, was responsible for more melt during the 2012 exceptional melt episodes.

As Robert Fausto of the Geological Survey of Denmark and Greenland, lead author of the study, says, "When we were analysing our weather station data, we were quite surprised, that the exceptional melt rates we observed were primarily caused by warm and moist air, because ice sheet wide melt is usually dominated by radiant energy from sunlight. "

This finding has implications for how the scientific community projects future ice sheet melt using climate models. In the study, the researchers also show that while the models presently used to project ice sheet melt can accurately simulate melt due to radiant energy, models tend to systematically underestimate melt due to the non-radiant energy processes they document.

"Glaciological instrumentation capable of automatically recording the daily rate of melting in exceptional melt circumstances, where the ice surface lowers by close to 10 m in a few months, has only emerged in the last decade or so, thanks to PROMICE. The detail of PROMICE observations is permitting new insights on brief, but consequential, exceptional melt events," says William Colgan of the Lassonde School of Engineering at York University, a co-author of the study.

Fausto adds that, "Exceptional melt episodes dominated by non-radiant energy are expected to occur more frequently in the future due to climate change. This makes it critical to better understand the influence of these episodes on ice sheet health."

*Photo available. Cutline: Researchers service one of PROMICE's automatic weather stations on the Greenland ice sheet that was used in the study. Photo by William Colgan, York University

York University is known for championing new ways of thinking that drive teaching and research excellence. Our 52,000 students receive the education they need to create big ideas that make an impact on the world. Meaningful and sometimes unexpected careers result from cross-discipline programming, innovative course design and diverse experiential learning opportunities. York students and graduates push limits, achieve goals and find solutions to the world's most pressing social challenges, empowered by a strong community that opens minds. York U is an internationally recognized research university - our 11 faculties and 24 research centres have partnerships with 200+ leading universities worldwide. As Canada's only fully bilingual campus, Glendon is one of the faculties of York University dedicated to excellence in bilingual postsecondary education.