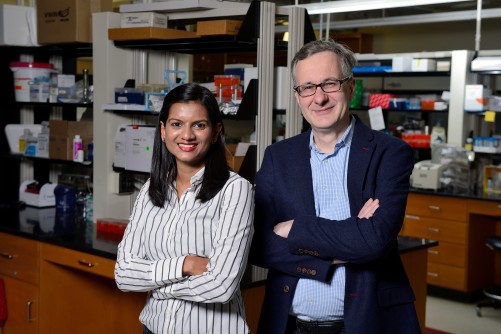 Newswise — A team led by Johns Hopkins researchers has discovered a biochemical signaling process that causes densely packed cancer cells to break away from a tumor and spread the disease elsewhere in the body. In their study, published online May 26 in Nature Communications, the team also reported that the combined use of two existing drugs disrupts this process and appears to significantly slow cancer’s tendency to travel, a behavior called metastasis.

The new findings are important, the researchers said, because 90 percent of cancer deaths are caused by metastasis, and anything that derails this activity could improve the prognosis for patients. The crucial new signaling process turned up when the team took a closer look at cellular events that promote metastasis.

"We found that it was not the overall size of a primary tumor that caused cancer cells to spread, but how tightly those cells are jammed together when they break away from the tumor,” said lead author Hasini Jayatilaka, a postdoctoral fellow at Johns Hopkins’ Physical Sciences-Oncology Center. “At a fundamental level, we found that cell density is very important in triggering metastasis. It’s like waiting for a table in a severely overcrowded restaurant and then getting a message that says you need to take your appetite elsewhere.”

Jayatilaka and her colleagues found a medication mix that kept this microscopic message from being delivered. The team members cautioned that this treatment was tested in animal models, but not yet on human cancer patients. Nevertheless, they said the discovery contributes to a promising new focus for cancer research: disrupting the biochemical activity that prods cancer cells to spread through the body.

One of the study’s senior authors, Denis Wirtz, who is Johns Hopkins University’s vice provost for research and director of its Physical Sciences-Oncology Center, said no commercial drugs are now being produced specifically to inhibit metastasis because drug companies believe the best way to stop cancer from spreading is to destroy the primary tumor from which it originates.

“The pharmaceutical companies view metastasis as a by-product of tumor growth,” said Wirtz, who also holds Johns Hopkins faculty appointments in chemical and biomolecular engineering, in pathology and at the Johns Hopkins Kimmel Cancer Center. “Our study looked more closely at the steps that actually initiate metastasis. By doing this, we were able to develop a unique therapeutic that directly targets metastasis, not the growth of the primary tumor. This treatment has the potential to inhibit metastasis and thus improve cancer patient outcomes.”

The two key drivers of metastasis, Wirtz said, are cancer cells’ tendency to reproduce at a rapid rate and their ability to move through surrounding tissue until they reach the bloodstream, where they can then hitch a ride to spread the disease to other parts of the body.

By studying tumor cells in a three-dimensional environment that resembles human tissue, the researchers were able to determine how these activities begin. The team discovered that as two types of cancer cells reproduced and created more crowded conditions in the test site, these cells secreted certain proteins that encouraged migration. The researchers identified these proteins as Interleukin 6 (IL-6) and Interleukin 8 (IL-8).

“IL-6 and IL-8 seem to deliver a message to cancer cells, telling them to move away from the densely populated primary tumor,” said lead author Jayatilaka, who recently earned her doctorate in chemical and biomolecular engineering as a member of Wirtz’s lab team and earlier received her undergraduate degree from Johns Hopkins’ Whiting School of Engineering.

In the team’s animal studies, the researchers found that applying two existing drugs—Tocilizumab and Reparaxin—blocked the receptors that enable cancer cells to get their relocation orders. Tocilizumab is an approved medication for rheumatoid arthritis and is in trials for use in ovarian cancer cases. Reparaxin is being evaluated as a possible treatment for breast cancer.

“In our eight-week experiment, when we used these two drugs together, the growth of the primary tumor itself was not stopped, but the spread of the cancer cells was significantly decreased,” Jayatilaka said. “We discovered a new signaling pathway that, when blocked, could potentially curb cancer’s ability to metastasize.”

The other senior authors of the Nature Communications paper were Daniele M. Gilkes of the Oncology and Pathology departments in the Johns Hopkins University School of Medicine and Rong Fan of the Department of Biomedical Engineering at Yale University. Other Johns Hopkins University co-authors were Pranay Tyle, Julia Ju, Hyun Ji Kim and Pei-Hsun Wu. Other co-authors from Yale were Jonathan J. Chen and Minsuk Kwak. Jerry S. H. Lee of the Johns Hopkins Department of Chemical and Biomolecular Engineering and the Center for Strategic Scientific Initiatives at the National Cancer Institute, was also a co-author.

This research was supported by National Cancer Institute grants 1U54CA210173-01 and R01CA174388. The Physical Sciences-Oncology Center at Johns Hopkins is based within the university’s Institute for NanoBioTechnology.