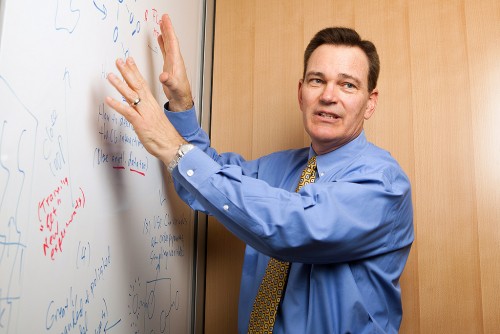 Gregory Voth, the Haig P. Papazian Distinguished Service Professor in Chemistry, and his UChicago colleagues have launched the new Center for Multiscale Theory and Simulation, a Phase I National Science Foundation Center for Chemical Innovation.

Newswise — The HIV virion is the virus particle that spreads the deadly AIDS infection from cell to cell.

“On the molecular scale it’s a huge object that probably involves a billion total atoms. You would never get anywhere just by trying to study atom-by-atom how they all interact with each other,” said Gregory Voth, the Haig P. Papazian Distinguished Service Professor in Chemistry at the University of Chicago. But Voth and his UChicago colleagues are working on a technique that might lead to a new, dramatically simpler way to predict molecular motion inside a cell. The team will pursue that goal with an initial $1.5 million Phase I grant from the National Science Foundation to launch the new Center for Multiscale Theory and Simulation.

“One of the reasons that the federal government supports basic research is because it has very positive impacts on our economy and our society,” said Matthew Platz, director of NSF’s Division of Chemistry. The CMTS, the only NSF-funded chemistry center purely devoted to theory and computation, could lead to the development of new pharmaceuticals and biomaterials. Joining Voth in founding the center are Benoit Roux, professor in biochemistry and molecular biology; Aaron Dinner associate professor in chemistry; Karl Freed, the Henry J. Gale Distinguished Service Professor in Chemistry; Jonathan Weare, assistant professor in mathematics; Nina Singhal Hinrichs, assistant professor in computer science; and Daniel Katz, senior computational researcher, Computation Institute. The center’s activities will span three UChicago research institutes: the Institute for Biophysical Dynamics, the Computation Institute and the James Franck Institute. Industrial collaborators so far consist of IBM, Genentech and Schrödinger, Inc.

New simulation capabilities “What’s impressive about Greg’s team is the variety of theoretical and computational tools that it brings to bear,” said Katharine Covert, a program director in NSF’s Division of Chemistry. These tools will include a theoretical and computer simulation capability for describing biological systems at interconnected multiple scales, from the molecular (the smallest) to the mesoscopic (intermediate) to the cellular (the largest).

“This is what we call the multi-scale problem, and probably nowhere in the natural world does the multi-scale problem manifest as dramatically as in the biology regime,” Voth said. Actin, a protein in the cytoskeleton (the dynamic scaffolding of the cell), presents a key aspect of the multi-scale problem. “It’s one of the most important components of biological cells, so if you don’t understand actin, it’s pretty hard to do much else,” Voth said. “If you want to start getting up to cellular levels, it’s really the glue that holds everything together. It’s a fantastic, complex problem.” The new center will implement an extensive new cyberinfrastructure network that will provide a broad array of computational equipment, software and techniques to support its work. This infrastructure includes large allocations of computer time from NSF and from Argonne National Laboratory’s Leadership Computing Facility to perform its calculations. One of the center’s most important computational tools is a technique called “coarse-graining,” which is a way of simplifying a complex problem in a mathematically precise way, with real-world physics built in.

If a scientist were to ask how to use the known laws of physics to calculate the properties of some part of that cell, “that’s an extremely challenging question,” Voth noted. Coarse-graining can help.

“A coarse-grained model may, let’s say, map a billion atoms into an equivalent structure that has a hundred thousand objects that represent what those atoms are doing,” Voth said. “If you do it right, then new important patterns of interactions emerge. You begin to learn a lot about the system.” Voth already has applied coarse graining to the HIV virion particle, and to antibodies that are important in pharmaceutical formulations for anti-cancer drugs.

Leo Kadanoff, the John D. MacArthur Distinguished Service Professor Emeritus in Physics and a National Medal of Science recipient, fruitfully pioneered one of the early concepts for doing this kind of work, called renormalization, in the early 1960s.

“He developed some of these renormalization techniques that have, along with others he pioneered, revolutionized the field of physics,” Voth said. “We’re trying to do the same kind of thing for these very complicated biological systems. I think most people would agree that the magnitude of that challenge is enormous because these systems don’t have simple interactions that are all the same or easy to classify.”

The value of the center’s results could extend far beyond biology into industrial and academic settings. “We’re talking about a conceptual framework to do this kind of thing, and broadly speaking, I think it will have an impact in many areas,” including renewable energy technology and new materials.

The center’s mission extends beyond research to include public outreach programming and advanced training for the next generation of scientists.

One goal is a collaboration with the Chicago Council on Science and Technology to disseminate CMTS scientific innovations, as well as to enhance public understanding and appreciation of science and technology. The CMTS also will host annual summer workshops to provide cross-disciplinary training in multiscale simulation for graduate students and postdocs from around the country. “We have an amazing number of graduate students and postdocs who have been trained in these centers who go on to get wonderful positions, doing what they want to do, who talk about the multidisciplinary environment being a big advantage during their job hunt,” NSF’s Covert said.

In addition, the UChicago Center for Chemical Innovation will focus outreach efforts through existing programs such as the Leadership Alliance and the Collegiate Scholars Program. They will provide access to the center’s activities and motivate high school and undergraduate students from minority groups to pursue education and careers in the mathematical and physical sciences.