Students and faculty members discover some of the possibilities for the future of education through the University’s first course conducted in virtual reality. 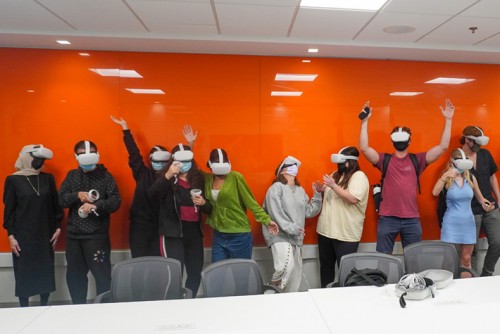 Students participated in the spring semester course, “Religion and Sacred Spaces in the Era of Virtual Reality and Artificial Intelligence,” which was taught in virtual reality.

Newswise — When Emily Nunes arrived in class recently, she found herself in a serene, outdoor arena near the ocean. Triangular transparent panels formed a roof over her, as Nunes stood in a manicured courtyard facing a large revolving Buddha statue. Contemplative flute music played in the background, as her classmates placed candles around the statue. The teaching assistant floated around the arena, guiding a discussion. Nearby, two classmates wore astronaut suits, while another appeared as a frog.

Clearly, Nunes was not attending a typical college course. Wearing an Oculus Quest 2 headset, she had entered the “Zen Oasis” a final project three classmates had created as part of the University of Miami’s first class held completely in virtual reality (VR).

“It’s unlike any other class I’ve taken at UM,” said Nunes, a senior studying motion pictures.

The small, discussion-based course, “Religion and Sacred Spaces in the Era of Virtual Reality and Artificial Intelligence,” is a collaboration among three faculty members—Kim Grinfeder, associate professor and chair of the Department of Interactive Media; William Green, a professor of religious studies; and Denis Hector, associate professor of architecture—to explore how spiritual practices and spaces will exist in the metaverse, a 3D world that people can enter using virtual reality headsets.

“Every Thursday, we’d hop on and go to this different place,” said Grinfeder, who also directs the University’s XR Initiative. “It’s been a wild ride, and we had a lot of fun in this class discovering new ways these immersive technologies allow us to connect with each other and learn.”

While the inaugural version of the class was conducted on Zoom last spring, every class this semester was held in virtual reality. This meant the 15 students and three professors attended class as their self-designed avatar. And almost every week, the group met in a different virtual setting. One class took place around a campfire, with stars twinkling overhead and crickets chirping into the headsets. Another was held inside a corporate conference room, and yet another occurred in a virtual Theatre of Pompey, with a massive semicircle of seats (so no avatars felt cramped). Students also designed their own classrooms as an assignment, reimagining learning spaces in the metaverse.

“It was a surreal experience, and it was often hard to absorb all of the magnificent things we learned and experienced each week,” said junior Samantha Clayman, who is studying biochemistry and nutrition, as well as Judaic studies.

Students and faculty members said the heightened sense of presence felt in virtual reality meant the class was much more engaging than learning on a video conferencing platform.

“It’s different from watching something on a screen because there is a sense of being somewhere else,” said Green, who is also the Fain Family Endowed Chair in Judaic Studies. “For example, when you are outdoors and hear the ocean and feel the sunlight, even though you aren’t physically there, it feels like you’ve had that experience.”

While the college class may not be the first held in virtual reality, the practice is still rare. In developing the class, Grinfeder reached out to colleagues around the country and could not find another example of a semester-long course held entirely in VR.

At the start of the semester, students said the technology was a bit challenging and they needed to take breaks from wearing the headset. But within a month, each two-hour-plus class flew by, said Matthew Rossi, a senior math and computer science major who served as the course’s teaching assistant.

The freedom to easily change class locations kept things interesting and allowed everyone to notice the impact of different spaces. While conversations in the conference room were terse, discussions flowed more freely in the outdoor environments, Rossi, Green, and Grinfeder agreed.

University leadership has also supported the class. The provost’s “Classrooms of the Future” initiative provided faculty members with a grant to buy the headsets before the spring semester. In addition, Jeffrey Duerk, executive vice president for academic affairs and provost, recently awarded the trio, along with Rossi, the Transdisciplinary Innovation Teaching Award, an honor bestowed on just a handful of instructors each year.

“Experiences like this course provide our students with diverse perspectives and ways of thinking that can lead to deeper understanding, creative problem solving, and innovation,” Duerk said. “Part of what we want to determine is how these technologies might define classrooms of the future.”

Senior meteorology and marine science major Nate Taminger said the novelty of learning in VR attracted him to the course. Like many of his classmates, Taminger had never tried VR before but is glad to now be familiar with the technology.

“In college, everyone wants to try new things and explore new opportunities,” he said. “Some of my friends are jealous they didn’t do something like this.”

During the first few classes, students and faculty members learned how to navigate in virtual reality—they can walk or teleport—using the hand controls and headsets. Then, student teams were assigned their final project—to create a sacred space with a ritual in the metaverse that the class could visit together. Since this required some technical expertise, teams included one interactive media student, an architecture student, and College of Arts and Sciences student, which melded different strengths.

Nunes’ team created a multisensory meditation experience where participants walk through a deepening tunnel of water. At the end of the passageway, an arched door opens to a sun setting on the horizon, where visitors can step on a stone and gaze out at the ocean surrounding them. She and others were surprised to feel so immersed in the meditative ritual.

“It’s not real life, but our brains perceive it as that,” Nunes said.

Despite the learning curve, students relished the chance to delve into VR. Many also commented on how refreshing it was to take a class where they learned how to harness new technology with the faculty members.

“It was all an experiment. And we were all learning together, which was so amazing,” said Clayman. “We were also beginning that foundation of designing spaces that don’t deal with the normal laws of physics.”

Students noticed some significant differences about taking a class in VR. First, only the first few attendees can display their full-body avatars, meaning that most of the students in class simply had a head, torso, and floating hands (missing legs is a common problem in the metaverse). Also, when avatars spawned into class, they all enter in the same spot and on top of each other, which often caused some virtual claustrophobia.

“It’s an unsettling feeling, even though it’s not your real body, it feels like an invasion of space,” Nunes said.

Students also found it challenging to take notes with the headset on, even though there is a virtual tablet function.

Regardless, almost everyone involved in the class said the experience made them recognize the endless opportunities for learning and working in the metaverse.

“Right now, [wearing the headset] is like putting a brick on your face. But in the future, they will get smaller and more accessible and easier to use,” said Clayman. “And at that point I think they will readily be used in education.”

“Right now, it still feels a bit like a video game, but the experience will get more authentic over time,’’ Rossi added. “And as this technology becomes more ubiquitous, and the quality of graphics improves, it will start to feel even more like physicality.”

Taminger is excited about the possibilities for VR in his field of meteorology and marine sciences.

“I am hoping I can use it one day to show people how climate change will affect the environment,” he said. “Whether it’s going to the Great Barrier Reef to show what is happening over there or using augmented reality to demonstrate to people what two meters of sea level rise will do to their communities, this is a way to show people how their lives can change.”

In the more immediate future, students and faculty members said that using VR could enhance courses in other subjects, like architecture, art history, foreign languages, health care, and other disciplines where being in a certain space might improve the learning experience.

“The capacity to extend and reflect your imagination in the metaverse is greater than it is in the three-dimensional world, simply because you can fabricate structures in a way that would be impossible to build in reality,” Green said.

“This is just the tip of the iceberg about what we can do in virtual spaces,” he said. “If we aren’t exploring this technology, we aren’t doing our jobs as forward thinking educators in higher education.”

Sana Paul, a senior majoring in political science, found the virtual classroom to be more welcoming for people with social anxiety. She said that she believes VR classes could also improve access for students with disabilities.

“It’s not as intimidating. So, in a VR classroom, more people are speaking up than they would do in a traditional classroom,’’ she said.

Paul, who hopes to become a lawyer, also envisions the metaverse as part of her future career.

“For the 80 percent of people who cannot afford legal services now, technology like VR may be able to bridge that gap,” she said. “And in general, VR can be a powerful tool as a realm for discussion, learning new perspectives, and understanding communities.”