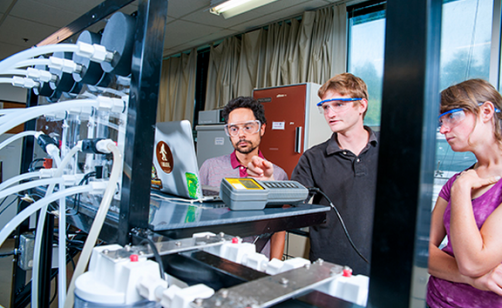 Newswise — Could desalination be the answer to California’s drought? As parts of the state become drier, scientists are looking at ways to turn seawater into drinkable water.

Desalination has made headlines in recent months as a possible solution to the state’s water shortage. But in addition to being expensive, its byproduct—salty brine—can harm marine life once it’s reintroduced into the ocean.

A team of researchers from Humboldt State University and the University of Southern California is hoping to address those concerns with a new process called Reverse Osmosis-Pressure Retarded Osmosis (RO-PRO).

They’re developing a portable, prototype RO-PRO system in Samoa, Calif.—which could lower the cost of desalination and reduce its impact on the environment.

“The high cost and environmental impact of desalination are major issues preventing it from becoming a reliable, drought-resistant water supply,” said Andrea Achilli, an Environmental Resources Engineering professor at Humboldt State, who holds a patent on the technology with researchers from the University of Southern California and Colorado School of Mines. “What our system does is address those problems head on.”

Desalination plants typically use reverse osmosis, a process that pushes saltwater through a membrane to create purified, drinking water. But in addition to being costly, and energy-intensive, reverse osmosis can negatively impact the environment.

The researcher’s system is different because it uses both reverse osmosis and its opposing process, pressure-retarded osmosis. In PRO, freshwater and seawater are combined in a pressurized chamber, creating water pressure that spins a turbine. When combined with RO, that energy is directly used to power the entire system. According to researchers, the process uses 30 percent less energy than traditional desalination methods.

Another benefit of the system is that the highly-concentrated saltwater is eventually diluted back to seawater, reducing environmental harm. “If used on a large scale, it could have a positive environmental effect and result in significant cost and energy savings,” Achilli says.

Once the system is completed, it will be housed and tested at the Samoa Pump Mill, where water from the Mad River meets the Pacific Ocean. During that time, researchers will test the system and its efficiency to determine whether it’s suitable for wider use. After that, they plan to incorporate the technology into existing desalination facilities around the state. “Eventually, we’d like to see the technology built into new desalination plants in California and elsewhere,” Achilli says.