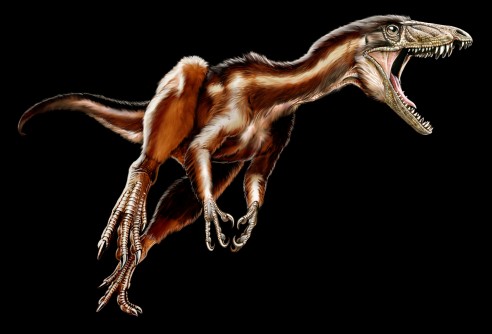 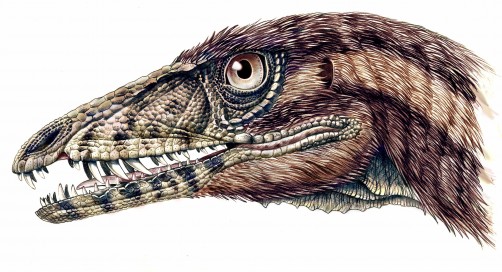 Fleshed-out reconstruction of the head of the new Triassic carnivorous dinosaur Tawa hallae. 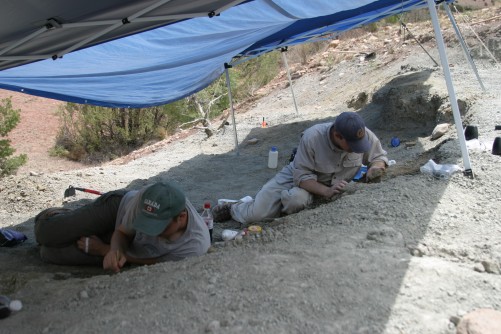 Randall Irmis (left), of the Utah Museum of Natural History at the University of Utah, and Sterling Nesbitt (right) excavate at the Hayden Quarry, Ghost Ranch, New Mexico. 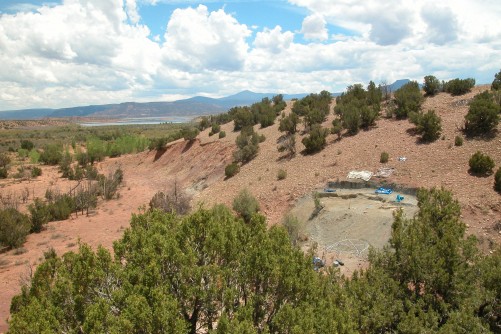 View of the Hayden Quarry at Ghost Ranch, New Mexico. 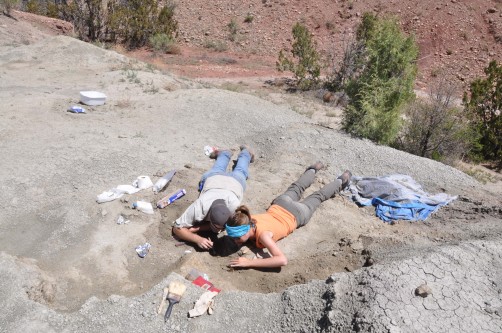 Newswise — Did the first dinosaurs wander across continents or stay put where they first evolved? The first dinosaurs evolved 230 million years ago when the continents were assembled into one landmass called Pangea. The question of early dinosaur movements remained unclear until the discovery of some exciting new fossils. In the Dec. 11, 2009, issue of Science, a team of paleontologists presents the 213-million-year-old fossils of previously unknown carnivorous dinosaur Tawa hallae, including several of the best preserved dinosaur skeletons from the Triassic Period. Fossil bones of Tawa, named after the Hopi word for the Puebloan sun god, were recovered from a dig site in northern New Mexico known as Hayden Quarry. The quarry is located on Ghost Ranch, where late painter Georgia O’Keefe once lived. Fossil bones of several individuals were recovered, but the type specimen is a nearly complete skeleton of a juvenile that stood about 28 inches (70 centimeters) tall at the hips and was approximately 6 feet (about 2 meters) long, from snout to tail. Its body was about the size of a large dog, but with a much longer tail. Based on an analysis of the relationships among Tawa and other early dinosaurs, the researchers hypothesize that dinosaurs originated in a part of Pangea that is now South America, diverging into theropods (like Tyrannosaurus rex), sauropodomorphs (like Apatosaurus) and ornithischians (like Triceratops); and then dispersed more than 220 million years ago across parts of Pangea that later became separate continents. “This new dinosaur Tawa hallae changes our understanding of the relationships of early dinosaurs, and provides fantastic insight into the evolution of the skeleton of the first carnivorous dinosaurs” said Randall Irmis of the Utah Museum of Natural History and University of Utah, a co-author of the study. In addition to Irmis, authors of the study included lead author Sterling Nesbit of the University of Texas at Austin; Nathan Smith of the University of Chicago and the Field Museum of Natural History; Alan Turner of Stony Brook University; Alex Downs of the Ruth Hall Museum of Paleontology in Abiquiu, N.M.; and Mark Norell of the American Museum of Natural History. “If you have continents splitting apart, you get isolation,” said Nesbitt. “So when barriers develop, you would expect that multiple carnivorous dinosaurs in a region should represent a closely related endemic radiation. But that is what we don’t see in early dinosaur evolution.” Instead, the research team found three distinct carnivorous dinosaurs – including the newly discovered Tawa – in the fossil-rich, Late Triassic beds they investigated at Ghost Ranch. “When we analyzed the evolutionary relationships of these dinosaurs, we discovered that they were only distantly related, and that each species had close relatives in South America,” said Irmis. “This implies that each carnivorous dinosaur species descended from a separate lineage before arriving in [the part of Pangea that is now] North America, instead of all evolving from a local ancestor.” At Ghost Ranch, the researchers found fossils from a carnivorous dinosaur related to Coelophysis, common to that region, and fossils from a carnivore closely related to Herrerasaurus, which lived in South America. The 6.6- to 13-foot-long (2- to 4-meter-long) skeletons of Tawa display characteristics that exist in both species and features found in neither, implying a separate lineage. “The discovery of multiple dinosaur species in one place that emigrated from elsewhere got us wondering whether other Late Triassic reptiles show similar patterns” said Irmis. “It turns out a variety of other reptile groups made multiple trips from the northern and southern continents [then parts of Pangea] and back again during the Late Triassic, including other dinosaurs.” Because so many different groups with different life modes were able to move freely across Pangea, the research team concluded that during the Late Triassic, there were no major physical barriers, such as large mountain ranges, to the movement of reptiles between parts of Pangea that later separated into distinct continents. But this presented a paradox to the team: “We wondered: if reptiles, including dinosaurs, were able to freely move around Pangea during the Late Triassic, then why aren’t there any sauropodomorph and ornithischian dinosaurs in North America during the Triassic?” said Irmis. “Our conclusion is that climate, possibly related to latitude, controlled the distributions of some reptile species.” “We think that all the major dinosaur groups had the ability to get to North America [part of Pangea] during the Late Triassic, and may have even passed through, but for some reason, only the carnivorous dinosaurs found the North American climate to be hospitable during this time,” concluded Irmis. The first Tawa fossils were discovered in 2004 by volunteers taking a paleontology seminar at the Ruth Hall Museum of Paleontology in New Mexico. Museum scientists invited the team of paleontologists to come and take a look. “The specimens are unusual because they are so well preserved,” said Irmis. “Because dinosaur bones are hollow, they are usually broken and crushed, but those of Tawa are nearly pristine.” Irmis and the rest of the team began a full-scale excavation in 2006 and have continued to unearth new material every summer since then. The fossil bone bed extends for tens of yards along a hillside, promising many years of potential significant finds. The research was supported by the National Science Foundation (NSF) through grants to Mark Norell, Alan Turner, Nathan Smith and NSF Graduate Research Fellowships to Sterling Nesbitt and Randall Irmis. The research was also featured in the NSF-funded IMAX 3-D movie “Dinosaurs Alive!” Research was additionally sponsored by the National Geographic Society with other participating institutions including the University of Chicago, the Field Museum of Natural History, the University of Utah, Stony Brook University and the Ruth Hall Museum of Paleontology.

Webcast for reportersReporters are invited to participate in a related, embargoed webcast, “Tawa hallae: Dinosaur Ancient History,” with Sterling Nesbitt, one of the co-discoverers of Tawa. The webcast will take place on Wednesday, Dec. 9, at 2 p.m. EST. To join the webcast, visit http://science360.gov/live/; the username is webcast and the password is dino (both are case sensitive). E-mail questions during the event to webcast@nsf.gov. To participate by phone, dial toll-free at 888-324-7501 or with toll at 1-212-547-0305 if dialing internationally. The required passcode for the dial-in is also dino. Please R.S.V.P. to Josh Chamot at jchamot@nsf.gov or (703) 292-7730.

Fact Sheet: Major Points of the Paper 1. Tawa is known from entire skeletons, is well preserved, and is one of the most completely known theropods from the Triassic. 2. Tawa is found in the same deposits as the primitive carnivorous dinosaur Chindesaurus (closely related to Herrerasaurus) and an animal closely related to Coelophysis. 3. These three animals are not each others’ closest relatives, demonstrating that Triassic carnivorous dinosaurs from the Hayden Quarry dispersed multiple times into North America. 4. Dispersal of early dinosaurs was prevalent during the Triassic, suggesting that the lack of sauropodomorph dinosaurs in North America was not a result of physical barriers. 5. Anatomical information from Tawa helps unite all Triassic carnivorous dinosaurs into one group, called Theropoda. Previously, some scientists thought that carnivorous dinosaurs such as Herrerasaurus and Eoraptor evolved before the split of sauropodomorphs and true theropods.

Fact Sheet: More Facts 6. Theropoda is the clade (natural group) of dinosaurs containing the carnivorous dinosaurs, including Tyrannosaurus rex, Velociraptor, and birds. 7. Dinosaurs lived with their closest relatives (“protodinosaurs” or “dinosaur precursors”) towards the end of the Triassic Period. 8. The Triassic Period lasted from 250 to 201 million years ago, and the following animals arose during this time: dinosaurs, crocodile relatives, mammals, pterosaurs, turtles, frogs, and lizards. 9. Tawa is a theropod dinosaur and most likely ate meat. 10. Tawa is known from multiple individuals ranging from small juveniles to sub adults. 11. Tawa is between 2 and 4 meters long and stood at 1-1.5 meters tall at the hips. 12. The braincase and neck of Tawa were surrounded by airsacs, just like living birds. 13. Tawa has features of both coelophysid dinosaurs like Coelophysis and Herrerasaurus. This mix of features shows that Herrerasaurus is the most primitive theropod (more closely related to birds than to sauropods). 14. The Hayden Quarry is between 215 million and 213 million years old. 15 The fossils described in this paper were found at Ghost Ranch, in northern New Mexico, near the town of Abiquiu. Ghost Ranch is famous for its Triassic fossils, and has been visited throughout the last 130 years by scientists from the University of California – Berkeley, American Museum of Natural History, Carnegie Museum of Natural History, and the famous paleontologist Edward Drinker Cope. 16. The fossils are from locality known as the Hayden Quarry. This locality is probably several million years older than the famous Coelophysis Quarry, also on Ghost Ranch land. 17. The Hayden Quarry was near the equator during the Late Triassic Period (it is currently at 36.2° latitude). 18. Dinosaurs may have originated in South America. 19. During the Triassic, the continents were coalesced into a single landmass named Pangaea. 20. The specimens of Tawa were collected during the filming of the NSF sponsored IMAX film “Dinosaurs Alive!” 21. Sauropodomorph dinosaurs did not live in North America during the Triassic even though they had to pass through North America when dispersing between South America, Africa, and Europe. 22. The name Tawa is from the Hopi name for the Puebloan sun god. The second part of the species name, hallae, is for Ruth Hall, who collected many of the specimens that formed the genesis of the Ghost Ranch Ruth Hall Museum of Paleontology (GR) collections. 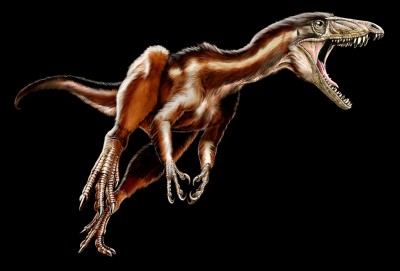 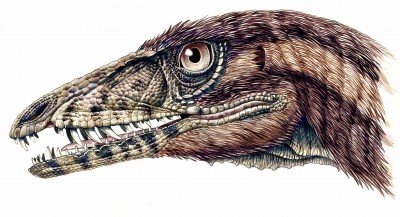 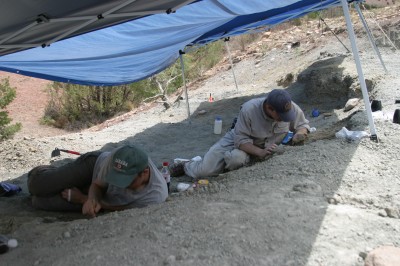 Caption: Randall Irmis (left), of the Utah Museum of Natural History at the University of Utah, and Sterling Nesbitt (right) excavate at the Hayden Quarry, Ghost Ranch, New Mexico. 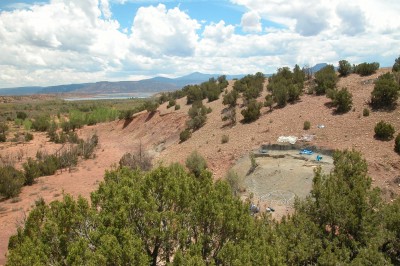 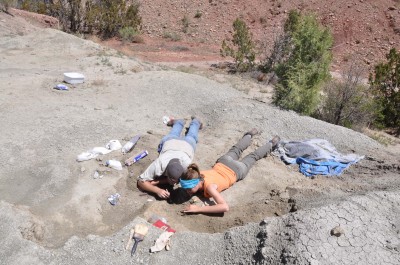