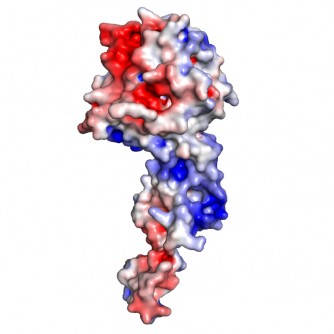 A protein — shown in red, white and blue — typically coats the genome of the Ebola virus, providing protection from enzymes that can destroy the virus’s genetic material. This protein coat is removed to allow the virus to replicate its genome in infected cells. New research led by Washington University School of Medicine shows that interfering with the removal and the return of the protein coat to the viral genome can kill the Ebola virus, a discovery that opens the door to more effective treatments.

Newswise — Opening the door to potential treatments for the deadly Ebola virus, scientists have found that a protein made by the virus plays a role similar to that of a coat-check attendant.

The protein removes a protective coat from the virus’s genetic material, exposing the viral genome so that it can be copied, and then returns the coat, according to a new study led by scientists at Washington University School of Medicine in St. Louis.

The research, in cell cultures, showed that interfering with this process kills the virus.

As part of the study, the researchers introduced rogue coat-check attendants into Ebola-infected cells. These rogue attendants carried a short chain of amino acids that forms the part of the protein that removes the coat. But they lacked the ability to return the coat, disrupting the emergence of newly created viruses from infected cells. Consequently, the virus did not survive.

“This coat-check protein, known as VP35, has a great deal of potential as a new target for Ebola treatments,” said senior author Gaya Amarasinghe, PhD, assistant professor of pathology and immunology at the School of Medicine. “If we can block this process, we can stop Ebola infection by blocking viral replication.”

The Ebola outbreak that began last year in West Africa has infected nearly 25,000 people and killed more than 10,000, according to the Centers for Disease Control and Prevention.

Ebola and other viruses like it are made of a single strand of RNA, a genetic material closely related to DNA. Higher organisms use RNA to copy protein-building instructions from their DNA, but Ebola stores such instructions — the virus’s genetic self — directly in RNA.

RNA is less stable than DNA and can set off immune defenses that destroy viruses. So Ebola keeps its RNA covered with a protective coat called the nucleoprotein.

To replicate, however, the virus has to partially remove the nucleoprotein and expose its RNA to the viral copying machinery. Amarasinghe and first author Daisy Leung, PhD, together with colleagues at the Icahn School of Medicine at Mount Sinai, University of Texas Southwestern Medical Center, Texas Biomedical Research Institute and Baylor University, have spent the past seven years studying the role of VP35, a viral protein involved in the replication process,

“One of the major challenges was that the part of VP35 involved in this interaction is an intrinsically disordered peptide,” said Leung, an assistant professor of pathology and immunology at Washington University. “This means that it may not take on a definite structure until it binds to another protein. That made structural studies of VP35 difficult because the structure, which plays a critical role in determining function, doesn't form without its specific binding partner.”

The researchers showed that VP35 binds to the virus’s nucleoprotein — which forms part of the protective coat worn by the virus’ RNA. They found that this binding removes the nucleoprotein from the viral RNA prior to replication. And while the viral RNA is being copied, VP35 keeps newly synthesized nucleoproteins from attaching to other RNA in the host cell.

New copies of the virus require new protein coats. So VP35 also ensures that new nucleoproteins — made by the host cell’s protein-making machinery — bind only to Ebola RNA, allowing the virus to complete replicating. Disabling or disrupting VP35 could stop the virus in its tracks, according to Amarasinghe.