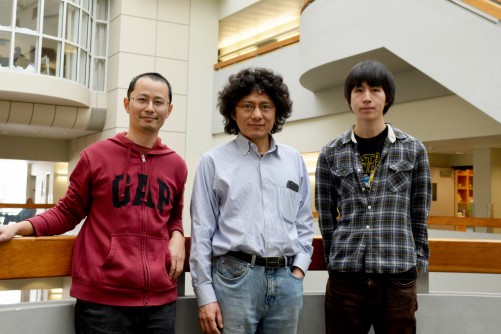 The tool is a small molecule known as a template. It has a long, curved structure and functions like a crane and wrecking-ball, anchoring itself temporarily to one part of a target molecule and swinging an atom of palladium to break a chemical bond at a distant part of the molecule. It allows chemists to make relatively easy modifications to sites on organic molecules that are otherwise difficult or impossible to access.

The invention brings chemistry a step closer to an ambitious goal: being able to use techniques of laboratory organic synthesis to make the highly selective transformations of molecules that enzymes catalyze in living cells—but without enzymes’ limitations.

“Enzymes that have evolved over millions of years are very good at making this type of modification of complex organic molecules, and here we’re showing that we can achieve a similar effect, with much greater versatility, using a small catalytic template,” said study senior author Jin-Quan Yu, Frank and Bertha Hupp Professor in the Department of Chemistry at TSRI.

As they report today in the journal Nature, Yu and his colleagues demonstrated their new catalytic template by using it to modify—in a way that was previously impossible--molecules that are commonly found in drugs and other biologically active compounds.

The template is designed to remove a simple hydrogen (H) atom from the carbon (C) backbone of an organic molecule, enabling the attachment of a more complex and reactive cluster of atoms. This removal and replacement process, known as C-H activation, is a basic step in molecule-building and often confers on a molecule the key properties that make it useful as a drug or other product. In this case, the aim is to perform a C-H activation at especially hard-to-reach spots on target molecules.

Initial versions of remote C-H activation templates, reported by the Yu Laboratory in two previous papers in Nature, can anchor themselves to one side of a molecule and in effect swing a palladium atom around to selectively hit and break a C-H bond on the far side of the molecule.

While these first-generation templates have been adopted by many chemists, they have some limitations: They anchor themselves to a target molecule using a very tight (covalent) bond, so that an extra reaction step is required to remove them. Moreover they often cannot attach to molecules called heterocycles, whose backbones contain a non-carbon such as nitrogen—yet more than half of modern drug molecules fall under this category.

The new template is meant to work with heterocycles, and it anchors reversibly so that, like an enzyme, it lifts off naturally after doing its work and moves on to catalyze new C-H activations. It thus eliminates a reaction step and is required in only small quantities.

The template has two main parts: a long, U-shaped structure to hold the bond-breaking palladium atom, and a base structure that also holds a metal atom: either palladium or copper. The non-carbon parts of a heterocycle backbone tend to attract such metals, and the new template exploits that tendency by using a metal atom as its anchor.

“That tendency of metals to stick to heterocycles has been a notorious problem when trying to use metal catalysts, but in this case we’re turning that tendency to our advantage,” Yu said.

To demonstrate the breadth and utility of the new template design, the team used variants of it to attach different organic molecules to heterocycle structures including phenylpyridine and quinoline. These heterocycles are often found in drugs and other bioactive molecules but have not been modifiable via C-H activation using earlier templates.

The products of these new reactions, all potentially valuable commercially, included novel versions of a plant-derived molecule, camptothecin, which has promising anti-tumor properties.

“This approach provides a new way to rapidly modify the structures of complex organic molecules, and thus should be broadly useful in the pharmaceutical and other chemical industries,” Yu said.

The co-first authors of the paper, “Remote site-selective C–H activation directed by a catalytic bifunctional template,” were Research Associate Zhipeng Zhang and Graduate Student Keita Tanaka of the Yu Laboratory.

Funding was provided by the National Institutes of Health (R01 GM102265)._________About The Scripps Research Institute

The Scripps Research Institute (TSRI) is one of the world's largest independent, not-for-profit organizations focusing on research in the biomedical sciences. TSRI is internationally recognized for its contributions to science and health, including its role in laying the foundation for new treatments for cancer, rheumatoid arthritis, hemophilia, and other diseases. An institution that evolved from the Scripps Metabolic Clinic founded by philanthropist Ellen Browning Scripps in 1924, the institute now employs more than 2,500 people on its campuses in La Jolla, CA, and Jupiter, FL, where its renowned scientists—including two Nobel laureates and 20 members of the National Academies of Science, Engineering or Medicine—work toward their next discoveries. The institute's graduate program, which awards PhD degrees in biology and chemistry, ranks among the top ten of its kind in the nation. In October 2016, TSRI announced a strategic affiliation with the California Institute for Biomedical Research (Calibr), representing a renewed commitment to the discovery and development of new medicines to address unmet medical needs. For more information, see http://www.scripps.edu.