New Evidence for a Water-Rich History on Mars 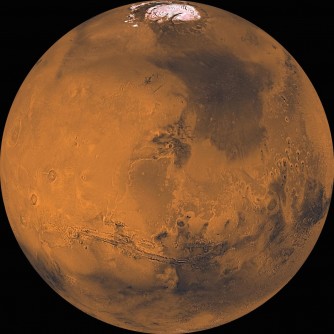 This view of Mars was created from about 1,000 Viking Orbiter images. 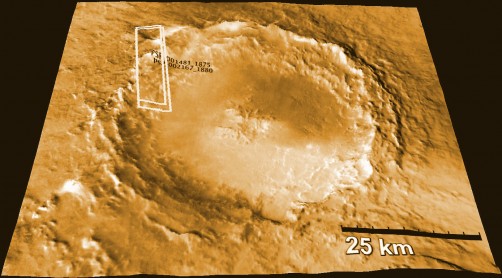 The Mojave Crater on Mars, which is believed to be the source of some Martian meteorites found on Earth, is pictured here in a rendering produced by the HIRISE camera on NASA’s Mars Reconnaissance Orbiter.

This mosaic of images from the Curiosity rover’s Mast Camera shows evidence of ancient lake and stream deposits on Mars. 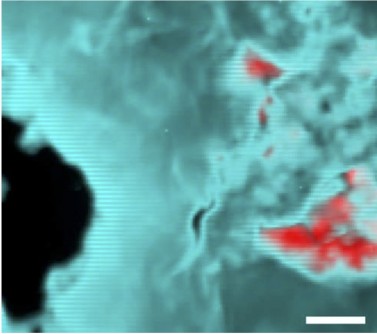 An X-ray fluorescence map of a shocked whitlockite sample. The red shows whitlockite and merrillite concentrations.

Newswise — Mars may have been a wetter place than previously thought, according to research on simulated Martian meteorites conducted, in part, at the Department of Energy’s Lawrence Berkeley National Laboratory (Berkeley Lab).

In a study published today in the journal Nature Communications, researchers found evidence that a mineral found in Martian meteorites -- which had been considered as proof of an ancient dry environment on Mars -- may have originally been a hydrogen-containing mineral that could indicate a more water-rich history for the Red Planet.

Scientists at the University of Nevada, Las Vegas (UNLV), who led an international research team in the study, created a synthetic version of a hydrogen-containing mineral known as whitlockite.

The X-ray experiments showed that whitlockite can become dehydrated from such shocks, forming merrillite, a mineral that is commonly found in Martian meteorites but does not occur naturally on Earth.

“This is important for deducing how much water could have been on Mars, and whether the water was from Mars itself rather than comets or meteorites,” said Martin Kunz, a staff scientist at Berkeley Lab’s ALS who participated in X-ray studies of the shocked whitlockite samples.

“If even a part of merrillite had been whitlockite before, it changes the water budget of Mars dramatically,” said Oliver Tschauner, a professor of research in the Department of Geoscience at UNLV who co-led the study with Christopher Adcock, an assistant research professor at UNLV.

And because whitlockite can be dissolved in water and contains phosphorous, an essential element for life on Earth -- and merrillite appears to be common to many Martian meteorites -- the study could also have implications for the possibility of life on Mars.

“The overarching question here is about water on Mars and its early history on Mars: Had there ever been an environment that enabled a generation of life on Mars?” Tschauner said.

The pressures and temperatures generated in the shock experiments, while comparable to those of a meteorite impact, lasted for only about 100 billionths of a second, or about one-tenth to one-hundredth as long as an actual meteorite impact.

The fact that experiments showed even partial conversion to merrillite in these lab-created conditions, a longer duration impact would likely have produced “almost full conversion” to merrillite, Tschauner said.

He added that this latest study appears to be one of the first of its kind to detail the shock effects on synthetic whitlockite, which is rare on Earth.

Researchers blasted the synthetic whitlockite samples with metal plates fired from a gas-pressurized gun at speeds of up to about half a mile per second, or about 1,678 miles per hour, and at pressures of up to about 363,000 times greater than the air pressure in a basketball.

“You need a very severe impact to accelerate material fast enough to escape the gravitational pull of Mars,” Tschauner said.

At Berkeley Lab’s ALS, researchers used an X-ray beam to study the microscopic structure of shocked whitlockite samples in a technique known as X-ray diffraction. The technique allowed researchers to differentiate between merrillite and whitlockite in the shocked samples.

Separate X-ray experiments carried out at Argonne Lab’s APS showed that up to 36 percent of whitlockite was transformed to merrillite at the site of the metal plate’s impact with the mineral, and that shock-generated heating rather than compression may play the biggest role in whitlockite’s transformation into merrillite.

There is also evidence that liquid water flows on Mars today, though there has not yet been scientific proof that life has ever existed on Mars. In 2013, planetary scientists reported that darkish streaks that appear on Martian slopes are likely related to periodic flows of water resulting from changing temperatures. They based their analysis on data from NASA’s Mars Reconnaissance Orbiter.

And in November 2016, NASA scientists reported that a large underground body of water ice in one region of Mars contains the equivalent of all of the water in Lake Superior, the largest of the Great Lakes. Rover explorations have also found evidence of the former abundance of water based on analysis of surface rocks.

“The only missing link now is to prove that (merrillite) had, in fact, really been Martian whitlockite before,” Tschauner said. “We have to go back to the real meteorites and see if there had been traces of water.”

Adcock and Tschauner are pursuing another round of studies using infrared light at the ALS to study actual Martian meteorite samples, and are also planning X-ray studies of these actual samples this year.

Many Martian meteorites found on Earth seem to come from a period of about 150 million to 586 million years ago, and most are likely from the same region of Mars. These meteorites are essentially excavated from a depth of about a kilometer below the surface by the initial impact that sent them out into space, so they aren’t representative of the more recent geology at the surface of Mars, Tschauner explained.

“Most of them are very similar in the rock composition as well as the minerals that are occurring, and have a similar impact age,” he said. Mars is likely to have formed about 4.6 billion years ago, about the same time as Earth and the rest of our solar system.

Even with more detailed studies of Martian meteorites coupled with thermal imaging of Mars taken from orbiters, and rock samples analyzed by rovers traversing the planet’s surface, the best evidence of Mars’ water history would be an actual Martian rock taken from the planet and transported back to Earth, intact, for detailed studies, researchers noted.

“It’s really important to get a rock that hasn’t been ‘kicked’” like the Martian meteorites have, said Kunz, in order to learn more about the planet’s water history.

Researchers from the University of Chicago and the Carnegie Institution of Washington also participated in this study. The work was supported the DOE National Nuclear Security Administration; NASA; and the National Science Foundation. 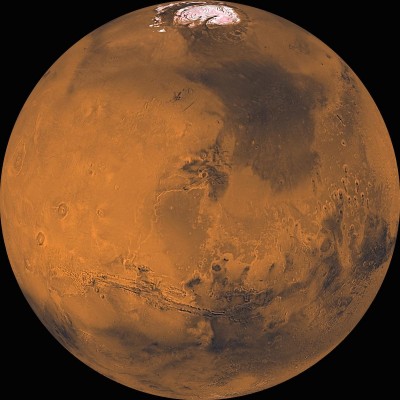 Caption: This view of Mars was created from about 1,000 Viking Orbiter images. 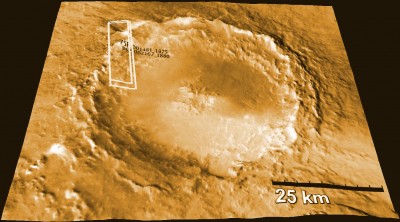 Caption: The Mojave Crater on Mars, which is believed to be the source of some Martian meteorites found on Earth, is pictured here in a rendering produced by the HIRISE camera on NASA’s Mars Reconnaissance Orbiter.

Caption: This mosaic of images from the Curiosity rover’s Mast Camera shows evidence of ancient lake and stream deposits on Mars. 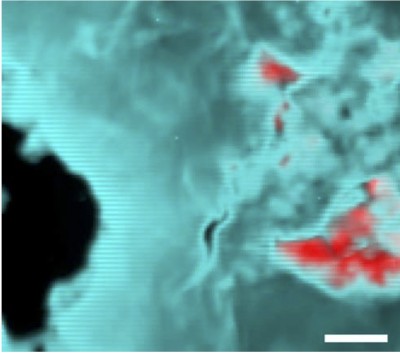