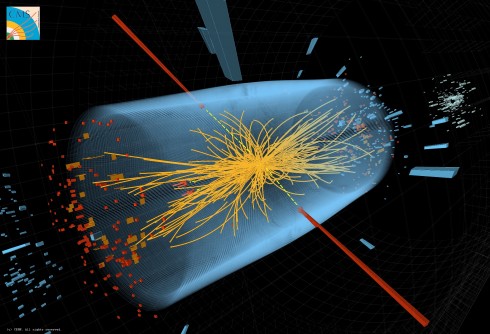 A typical candidate event including two high-energy photons whose energy (depicted by red towers) is measured in the CMS electromagnetic calorimeter. The yellow lines are the measured tracks of other particles produced in the collision. The pale blue volume shows the CMS crystal calorimeter barrel. 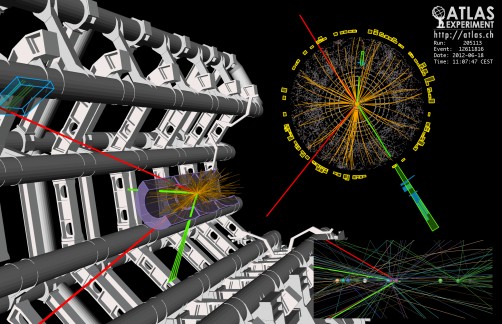 Event display of a H -> 2e2mu candidate event with m(4l) = 122.6 (123.9) GeV without (with) Z mass constraint. The masses of the lepton pairs are 87.9 GeV and 19.6 GeV. The event was recorded by ATLAS on 18-Jun-2012, 11:07:47 CEST in run number 205113 as event number 12611816. Muon tracks are colored red, electron tracks and clusters in the LAr calorimeter are colored green. The larger inset shows a zoom into the tracking detector. The smaller inset shows a zoom into the vertex region, indicating that the 4 leptons originate from the same primary vertex.

The following news release is being issued jointly by the U.S. Department of Energy's Brookhaven National Laboratory and Fermi National Accelerator Laboratory on behalf of the U.S. LHC organization (http://www.uslhc.us/). It describes the latest results from two experiments at the Large Hadron Collider (LHC) at CERN that are searching for signs of the Higgs boson, a subatomic particle postulated by the Standard Model of particle physics as the source of mass for other particles. For more information about Brookhaven's role in the Higgs search and work on the LHC's ATLAS experiment see the Brookhaven ATLAS website (http://www.bnl.gov/atlas/) and this press release (http://www.bnl.gov/newsroom/news.php?a=11432). Brookhaven Lab Media Contact: Peter Genzer, [email protected], (631) 344-3174

The new particle discovered at experiments at the Large Hadron Collider last summer is looking more like a Higgs boson than ever before, according to results announced today.

On July 4, physicists on the CMS and ATLAS experiments announced the discovery of a particle with a close resemblance to a Higgs, a particle thought to give mass to other elementary particles. The discovery of such a particle could finish a job almost five decades in the making: It could confirm the last remaining piece of the Standard Model of particle physics, a menu of the smallest particles and forces that make up the universe and how they interact.

"Clear evidence that the new particle is the Standard Model Higgs boson still would not complete our understanding of the universe," said Patty McBride, head of the CMS Center at Fermilab. "We still wouldn't understand why gravity is so weak and we would have the mysteries of dark matter to confront. But it is satisfying to come a step closer to validating a 48-year-old theory."

Researchers look for the Higgs boson at the LHC by accelerating protons to high energies and crashing them into one another. The energy of those colliding protons can briefly convert into mass, bringing into being heavier particles such as the Higgs bosons. The heavy particles are unstable and decay almost immediately into pairs of less massive particles.

Scientists have specific predictions for how often a Standard Model Higgs boson of a certain mass will decay into different patterns of particles. The latest results indicate that the new particle is sticking to the Standard Model's script.

The ATLAS and CMS collaborations have analyzed two and a half times more data than was available for the discovery announcement in July, and, in their preliminary results, they find that the new particle is looking more and more like a Higgs boson.

"When we discovered the particle, we knew we found something significant," ATLAS scientist and New York University professor Kyle Cranmer said. "Now, we're just trying to establish the properties."

Hundreds of scientists and students from American institutions have played important roles in the search for the Higgs at the LHC. Fermi National Accelerator Laboratory and Brookhaven National Laboratory host the U.S. contingents of the CMS and ATLAS experiments, respectively. More than 1,700 people from U.S. institutions-including 89 American universities and seven U.S. Department of Energy (DOE) national laboratories-helped design, build and operate the LHC accelerator and its four particle detectors. The United States, through DOE's Office of Science and the National Science Foundation, provides support for research, detector operations, and upgrades at the LHC, as well as supplies computing for the ATLAS and CMS experiments.

The vast majority of U.S. scientists participate in the LHC experiments from their home institutions, remotely accessing and analyzing the data through high-capacity networks and grid computing. Working collaboratively, these international organizations are able to analyze an incredible amount of data.

After further analysis, scientists will be able to say whether this new particle is the Standard Model Higgs boson or something more surprising.

Fermilab is America's premier national laboratory for particle physics research. A U.S. Department of Energy Office of Science laboratory, Fermilab is located near Chicago, Illinois and operated under contract by the Fermi Research Alliance, LLC. Visit Fermilab's website (http://www.fnal.gov/) and follow us on Twitter at @FermilabToday.

The National Science Foundation focuses its LHC support on funding the activities of U.S. university scientists and students on the ATLAS, CMS and LHCb detectors, as well as promoting the development of advanced computing innovations essential to address the data challenges posed by the LHC. For more information, please visit http://www.nsf.gov/.

CERN, the European Organization for Nuclear Research, is the world's leading laboratory for particle physics. It has its headquarters in Geneva, Switzerland. At present, its Member States are Austria, Belgium, Bulgaria, the Czech Republic, Denmark, Finland, France, Germany, Greece, Hungary, Italy, the Netherlands, Norway, Poland, Portugal, Slovakia, Spain, Sweden, Switzerland and the United Kingdom. Romania is a candidate for accession. Israel and Serbia are Associate Members in the pre-stage to Membership. India, Japan, the Russian Federation, the United States of America, Turkey, the European Commission and UNESCO have Observer status.