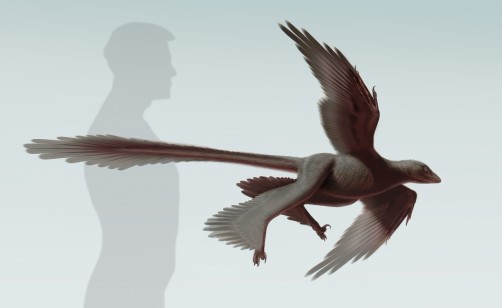 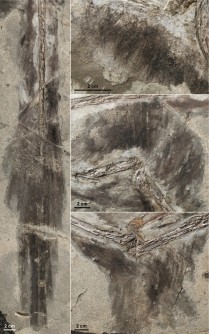 Image 3: Details of the preserved feathers of Changyuraptor yangi. 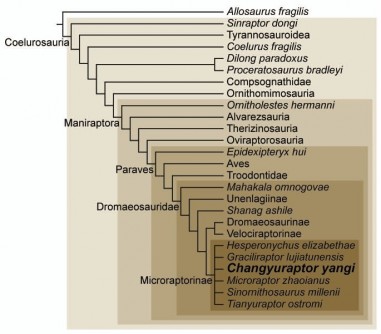 Newswise — STONY BROOK, NY, July 11, 2014 – Research findings from an international team of scientists including Alan Turner, PhD, Assistant Professor in the Department of Anatomical Sciences at Stony Brook University School of Medicine, uncovers details on how a new species of a feathered raptorial dinosaur found in China provides evidence on how large-bodied dinosaurs took to the air. To be published in Nature Communications, the research hinges on understanding where within the evolutionary tree of dinosaurs this new species, called Changyuraptor yangi, belonged.

The new species is a 125 million-year-old dinosaur found in the Liaoning Province of northeastern China. Changyuraptor preserves a full set of feathers covering its entire body, including exceptionally long tail feathers and a long bony tail. The research team applied aerodynamic models to test the function of its unique tail shape. Additionally, through detailed comparison of its morphology and inclusion in a large analysis of other dinosaurs, the researchers were able to place Changyuraptor into the evolutionary tree of dinosaurs. Dr. Turner generated the evolutionary trees used in the study.

“Numerous anatomical features and behaviors that we have long associated with birds in fact evolved in dinosaurs long before the first birds arrived on the scene,” says Dr. Turner. “This includes hollow bones, nesting behavior, feathers, and possibly flight. There is a growing diversity of feathered dinosaurs close to the origin of birds that many research groups are looking at to understand how gliding or flight aerodynamics evolved, and whether these traits were inherited by the earliest birds.”

“At a foot in length, the amazing tail feathers of Changyuraptor are by far the longest of any feathered dinosaur,” said Dr. Luis Chiappe, Director of the Dinosaur Institute at the Natural History Museum of Los Angeles County and lead investigator on the study.

“The long bony tail of Changyuraptor and the foot long feathers it sported are unlike the short tails in modern birds,” adds Dr. Turner. “So how it functioned aerodynamically would have been quite different from living birds. However, this is exactly the sort of tail we see in the earliest birds and their immediate precursors, which means avian flight evolved in animals with long tails. Changyuraptor provides an excellent opportunity to investigate just what this tail might have been good for.”

Drs. Turner, Chiappe and colleagues show evidence that Changyuraptor belongs within a specific group of four-winged raptorial dinosaurs called the microraptorines. At four-foot-long it is the biggest of all four-winged dinosaurs. These microraptors are dubbed “four-winged” because the long feathers attached to the legs have the appearance of a second set of wings. The long feathers attached to the legs and arms of these animals have led some researchers to propose that the four-winged dinosaurs were capable of flying.

The researchers believes that the new discovery explains the role that the tail feathers played during aerodynamic behavior such as gliding or flying. For larger animals, safe landings are particularly important. The long tail and large flight surface provided by the long feathers was shown to be efficient in controlling decent speed and the natural tendency to pitch forward or back during decent.

The research also details that aerodynamic structures in avian precursors were not limited to very small animals, and appear well adapted for the aerodynamic demands of larger animals, such as Changyuraptor.

“Clearly far more evidence is needed to understand the nuances of dinosaur flight,” emphasizes Dr. Chiappe, “but Changyuraptor is a major leap in the right direction.”

The research team was both international and interdisciplinary. Dr Chiappe worked with researchers at the Paleontological Center of Bohai University, and the Chinese Academy of Geological Sciences to describe this new species. Dr. Turner spearheaded the evolutionary tree investigation; Dr. Anusuya Chinsamy of the University of Cape Town (South Africa) analyzed the animal bone histology to determine it was fully grown, and Dr. Mike Habib of the University of Southern California performed the aerodynamic analysis. 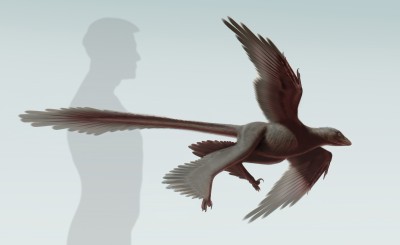 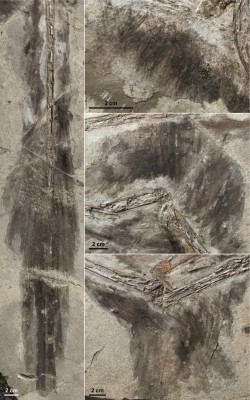 Caption: Image 3: Details of the preserved feathers of Changyuraptor yangi. 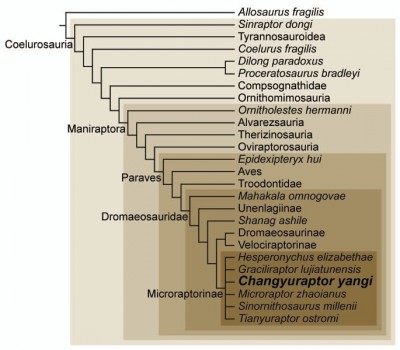