New Guidelines for Life-Saving Blood Transfusions Based on Rutgers Research 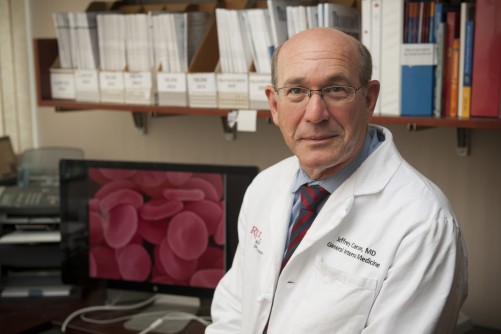 Newswise — New Brunswick, N.J. -- Most patients who need blood transfusions – including those who are critically ill – can be given blood when their hemoglobin drops to a lower level than practiced traditionally, according to AABB, a national association of blood banks that based its recommendation on research led by Rutgers University.

The new guidelines, published by The Journal of the American Medical Association (JAMA), were developed after Jeffrey L. Carson, professor of medicine at Rutgers Robert Wood Johnson Medical School, and an international team of scientists and doctors conducted comprehensive research using more than 60 years of red blood cell transfusion data and 31 clinical trials that examined outcomes of more than 12,500 individuals who received transfusion at lower (restrictive) verse higher (liberal) thresholds.

“Clinically, these results show that no harm will come from waiting to transfuse a patient until the hemoglobin level reaches a lower point,” said Carson, first author of the paper and co-chair of the AABB guideline panel. “The restrictive approach is associated with reductions in blood use, blood conservation and lower expenses.”

In the United States, an estimated 5 million people receive transfusions each year, according to the Centers for Disease Control and Prevention. They include surgery patients; accident, burn and trauma victims; mothers and babies during and after childbirth; and others whose blood counts reach low enough levels to threaten their lives. The guidelines recommend initiating a transfusion at a lower level than has been indicated in past practice.

AABB (formerly the American Association of Blood Banks) said based on the new evidence transfusions at a lower level are recommended for critical care patients as well as those undergoing orthopedic and cardiac surgery, and those with pre-existing cardiovascular disease. Further clinical trials are needed to determine whether heart attack patients with anemia or those with a bone marrow disorder benefit from transfusion at higher hemoglobin levels, Carson said.

“We are about to embark on a large international clinical trial supported by the NIH that will provide the evidence needed to determine the best course of action for patients who have had a heart attack,” said Carson.

The new guidelines also include a second recommendation as a result of research that blood stored under standard conditions – up to 42 days – is just as safe as new blood which is less than 10 days old. According to Aaron Tobian, associate professor of pathology at Johns Hopkins University and co-chair of the AABB guidelines panel, “one of the biggest controversies in transfusion medicine is whether blood that is stored longer is harmful.”

Carson, Tobian and colleagues from throughout the United States and Canada were involved in the guideline development that says transfusion medicine has significantly advanced the science in recent years and provides high quality evidence needed to make these recommendations.

Carson has been examining this issue for the past 25 years. In 2011, Carson’s research published in the New England Journal of Medicine, which demonstrated the safety of few transfusions in the short term – 60 days– was one of the driving forces behind a change in blood transfusion practice nationally.

Guidelines are important because physicians performing surgeries and other procedures decide when a transfusion is needed, how much blood is needed based on how much blood the patient has lost and by closely watching vital signs such as low blood pressure.

“It is important for physicians and patients to know that these recommendations are based on high quality clinical evidence,” said Carson. “We need to promote guidelines based on what science reveals.”