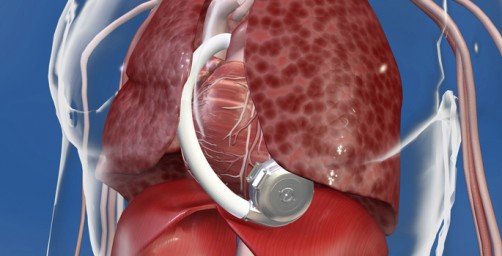 The new HeartWare left ventricular assist device is implanted through a minimally invasive approach and sits inside the chest, connecting directly to the heart.

Newswise — Sometimes smaller is better. This is especially true of left ventricular assist devices, the mechanically operated heart pumps that are implanted in heart failure patients to bridge them to transplantation. Vanderbilt Heart and Vascular Institute (VHVI) was the first facility in Tennessee to implant the miniaturized HeartWare HVAD Pump through a minimally invasive approach known as a thoracotomy, a small incision on the side of the chest. The HVAD Pump is a miniaturized, full output device designed to be implanted in the pericardial space. It sits inside the chest and connects directly to the heart. No abdominal dissection is required in the implant procedure. Last year, Simon Maltais, M.D., assistant professor of Cardiac Surgery and director of the Heart Transplant and Ventricular Support Program, traveled to the University Heart Center in Leipzig, Germany, to observe Martin Strueber, M.D., and Jan Schmitto, M.D., of Hanover, Germany, as they implanted the HeartWare device. They are now considered pioneers of the minimally invasive LVAD approach. Over the last year, VHVI became the largest minimally invasive LVAD center in the United States. Now, physicians from all over the country come to Vanderbilt Heart to watch Maltais at work. “They come and visit every month. We are getting a lot of attention,” he said. To date, Maltais has implanted 50 HeartWare devices, 40 percent of them minimally invasively, which requires a small 4-6 cm incision. This approach avoids opening the chest through a sternotomy, thus decreasing OR time, risk of perioperative bleeding and infection. “We try to minimize splitting the sternum, which can be very traumatic. This facilitates the reoperation for the eventual heart transplant. It’s a very big advantage,” Maltais said. Combined with another LVAD device known HeartMate II, which VHVI started using in 2008, Vanderbilt performed 82 LVAD procedures in 2013, placing it in the top five medical centers in the country for the number of implants. All told, LVAD survival rates are at 90 percent at Vanderbilt, Maltais said. The HeartMate II is a high-speed axial flow rotary blood pump. It drains blood continuously from the left ventricle to the aorta by the action of the internal rotor, leading to improved long-term performance. An article that appeared recently in The New England Journal of Medicine outlined an increased rate of pump thrombosis (blood clots) with the HeartMate II. Vanderbilt, which has a collaborative relationship with the Mayo Clinic and the University of Michigan to study LVAD outcomes, had not observed this trend. Maltais and John Stulak, M.D., of the Mayo Clinic, studied the outcomes from 516 HeartMate II pump implants performed at the three institutions and submitted their results to the NEJM. Their letter, written in response to the original article, appeared in the April 10 issue of the journal. While the group’s findings confirmed a similar peak in pump thrombosis in 2012, it unanimously observed a decrease in 2013, according to the NEJM letter. “These observations were found consistent at each individual center before combining data. While the field is indebted to the report by Starling et al, we have observed a different trajectory in confirmed pump thrombosis incidence more recently,” the authors write. “While we believe this important information should be available to readers, it reaffirms the need to standardize patient management in this challenging population.” Vanderbilt successfully reduced the rate of pump thrombosis associated with the HeartMate II by adjusting its post-operative management on treatment of blood pressure, using more aggressive anticoagulation therapy and managing pump speed differently. “This work will be widely cited in the upcoming years and proves our ability to be in the top advanced heart failure centers in the country. Our advanced heart failure research program is very productive and is part of making the field progress,” Maltais said.