This is a short video overview for the new iBooks textbook "Reach for the Stars: Touch, Look, Listen, Learn." Total runtime is 5 minutes. 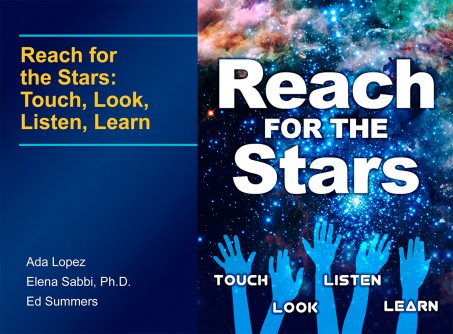 This is the cover art for the free, multi-touch iBooks textbook entitled "Reach for the Stars: Touch, Look, Listen, Learn." Astronomers at the Space Telescope Science Institute have teamed up with the SAS Corporation, the National Braille Press, and the National Federation of the Blind to create a book to inspire students of all abilities. Students with visual impairments can access the book using the VoiceOver screen reader that is available on every iPad.

Newswise — Children with visual disabilities can experience striking deep-space images like never before in a free, multi-touch iBooks textbook for the iPad entitled "Reach for the Stars: Touch, Look, Listen, Learn." The book can be downloaded free from Apple's iBooks Store at https://itunes.apple.com/us/book/reach-for-stars-touch-look/id763516126?mt=11? .

Astronomers at the Space Telescope Science Institute (STScI) have teamed up with the SAS Corporation, the National Braille Press, and the National Federation of the Blind to create a book to inspire students of all abilities to pursue future careers in science. The book incorporates new assistive technologies to help the seeing impaired.

STScI astronomer Elena Sabbi worked with developers to translate colorful imagery from the Hubble Space Telescope into content accessible to all students, including students with visual disabilities.

The development of the iBooks textbook is funded by a Hubble education and public outreach grant.

Students can use, enjoy, and learn from "Reach for the Stars," including those with visual impairments and learning disabilities. "This book allows any child to experience the wonders of space," Sabbi explained. "We want young students to understand that anyone can be a scientist."

Traditionally, the abundance of charts, graphs, and other visual representations of data have made it challenging to present math and science topics to visually impaired students. In addition, teachers of the visually impaired are struggling to cope with the rapid conversion from printed textbooks to digital instructional materials. "Reach for the Stars" embeds accessibility directly into the book so every student in the classroom can use the same book. Educators do not have to convert the content to special formats for students with disabilities.

Ed Summers, a blind software engineer and Senior Manager of Accessibility and Applied Assisted Technology at SAS, spearheaded the development of the iBooks textbook, leading a team of programmers, graphic artists, and accessibility specialists. Summers emphasized that "Reach for the Stars" is not solely for blind children.

"This is a mainstream book to benefit every student, rather than something limited to a small audience of students with visual impairments," said Summers.

The iBooks textbook consists of seven chapters. Children with learning disabilities can touch the audio icon on each screen to hear the text read to them. Students with visual impairments can access the book using the VoiceOver screen reader that is available on every iPad.

Images, graphics, and animations, some of which are interactive, appear in every chapter. Prominent star clusters in an image of the Tarantula Nebula, for example, are marked by circles. Touch a circle and the name of the feature is read aloud and a caption appears on the screen.

The iBooks textbook also utilizes "sonification," which uses sound to convey data. For instance, in a diagram plotting the brightness of stars against their surface temperature, touch-generated variations in pitch convey the intensity of a particular star. The brighter the star, the higher the pitch. The temperature of a star is conveyed through either the left or right ear. Cooler stars are on the left of the graph, hotter stars on the right.

The Baltimore-based National Federation of the Blind, a project partner, will promote the book through its network of teachers and parents.

Prospective users are encouraged to download the book from Apple's iBooks Store and order the tactile overlays. The book was created for the iPad and iPad Mini. A short video and teacher support page will help jumpstart learning. In addition, users can download a 3-D model of the Hubble Space Telescope and print it on a 3-D printer.

The Hubble Space Telescope is a project of international cooperation between NASA and the European Space Agency. NASA's Goddard Space Flight Center in Greenbelt, Maryland, manages the telescope, while STScI conducts science operations. STScI is operated for NASA by the Association of Universities for Research in Astronomy, Inc., in Washington, D.C.