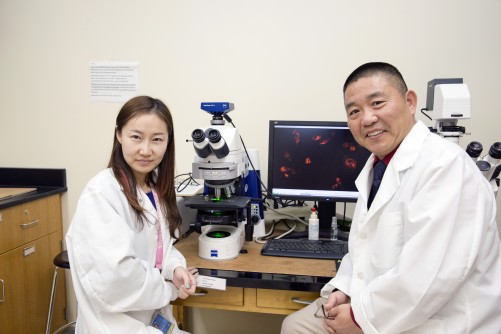 South Dakota State University pharmacy researcher Xiangmin Guan and his team have developed the first method of determining thiol levels in intact living cells—the brighter the fluorescence, the higher the thiol levels, and therefore, oxidative stress has not affected the cellular structure. Diminishing green fluorescence in samples one through three means that thiols have been consumed trying to protect the cell, indicating a greater likelihood of damage due to oxidative stress. 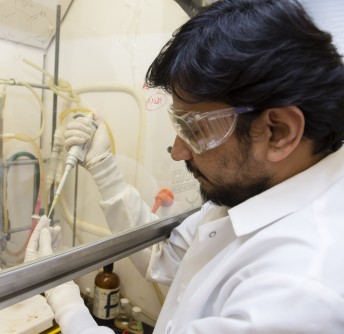 Postdoctoral research associate Bhimanna Kuppast at South Dakota State University mixes experimental compounds that designed to react with thiol on the cell surface and in mitochondria.

Newswise — Neurodegenerative diseases, such as Alzheimer’s and Parkinson’s, affect more than 6.4 million Americans, according to the Harvard NeuroDiscovery Center. That number may double in the next 30 years as the population ages, unless medical researchers figure out what’s happening at a cellular and molecular level and develop ways to treat or prevent these debilitating conditions.

Aging and oxidative stress are the culprits, but the challenge is to determine which cells, and even subcellular structures, are affected, according to South Dakota State University pharmacy professor Xiangming Guan. The medicinal chemist is developing imaging techniques that will help researchers identify what might be contributing to the course a degenerative disease takes.

Tracking the body’s natural antioxidantOrganic molecules called thiols play a major role in defending the body against oxidative stress, Guan explained. These antioxidants, which are present inside and outside of cells, counteract the effect of reactive oxygen molecules known as free radicals which are involved in oxidative stress. Free radicals can disrupt normal cell functions.

“Thiols are consumed during oxidative stress, so we see lower thiol levels,” Guan said. “Therefore, the level of thiols is used as one of the indices that reflect whether there is oxidative stress.”

Drinking alcohol, for instance, can damage the liver, Guan explained. Thiols can quench the toxic effect of alcohol, but once they are depleted, the body cannot defend itself. Similarly, damage to nerve cells can then lead to degenerative diseases such as Parkinson’s disease and multiple sclerosis.

Improving analytical toolsThrough National Institutes of Health grants for nearly $800,000, Guan and his team developed the first imaging reagent that can determine thiol levels in intact living cells. Previous methods of determining thiol concentrations required the destruction of the cells and tissue.

“We found a compound which can determine thiol density in live cells in a quantitative way through a particular type of chemical reaction,” he said. In the presence of thiol, the chemical gives off fluorescence—the higher the thiol level, the higher the fluorescence. Decreased fluorescence means thiols have been consumed trying to protect the cell, meaning it is more likely to be damaged.

While other methods focused on nonprotein thiols and necessitated breaking the cells or tissues to accomplish the analysis, Guan’s technique monitors both nonprotein and protein thiols without breaking the cells and, thus, has the advantage of showing thiol distribution and density inside the cell. For instance, thiol concentrations in cells or tissues might be normal but the distribution might not be normal under a disease state.

With a new three-year NIH grant for $327,500, Guan hopes to develop reagents that can selectively show thiol density in subcellular structures, specifically the nucleus and mitochondria. “These are crucial subcellular organs,” Guan said, comparing the function of cell mitochrondria to that of the heart. Furthermore, cell nuclei contain DNA, which can be altered by oxidative stress.

In addition, “thiol levels in the nucleus cannot be accurately determined since thiols leak out during isolation.”

Examining subcellular structuresWhen dealing with age-related degenerative diseases, Guan pointed out, “There are a lot of unknowns.” If Guan and his team are successful, scientists will have an analytical tool to monitor how thiols in subcellular structures affect degeneration. For example, if researchers see a marked decrease in mitochondrial thiol before onset of Alzheimer’s symptoms, Guan explained, “perhaps we can find a way to deliver thiol into the mitochondria to prevent or slow that down.”

Furthermore, scientists can use this analytical tool to determine if an intervention protected the subcellular structure, Guan pointed out. He hopes to develop a nontoxic reagent safe enough to be used for diagnostic imaging, like an MRI. 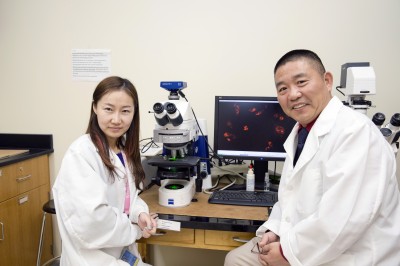 Caption: South Dakota State University pharmacy researcher Xiangmin Guan and his team have developed the first method of determining thiol levels in intact living cells—the brighter the fluorescence, the higher the thiol levels, and therefore, oxidative stress has not affected the cellular structure. Diminishing green fluorescence in samples one through three means that thiols have been consumed trying to protect the cell, indicating a greater likelihood of damage due to oxidative stress. 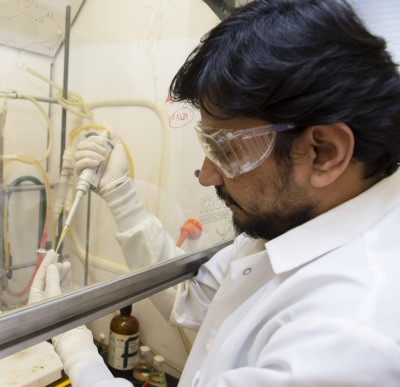