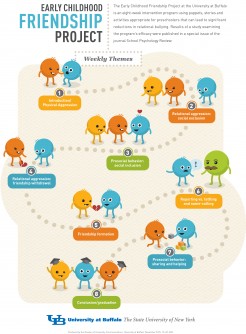 The Early Childhood Friendship Project at the University at Buffalo is an eight-week intervention program using puppets, stories and activities appropriate for preschoolers that can lead to significant reductions in relational bullying.

Newswise — BUFFALO, N.Y. – Physical and relational bullying can happen among children as young as 3- to 5-years-old, but the results of a new study suggest that a relatively short intervention program recently developed by researchers at the University at Buffalo can lead to significant reductions in some of these behaviors.

The study, published in a special edition of the journal School Psychology Review, is one of the first to examine and identify multiple types of bullying behavior in early childhood.

The intervention is called the Early Childhood Friendship Project (ECFP). It’s an eight-week program using puppets, stories and activities appropriate for preschoolers that can easily be folded into existing curriculums. “Our goal is to eventually give this program away to all those qualified to implement it,” says Jamie Ostrov, an associate professor in the UB Department of Psychology and lead author of the paper with Stephanie Godleski, now an assistant professor at the Rochester Institute of Technology, and UB graduate students Sarah Blakely-McClure, Lauren Celenza and Kimberly Kamper-DeMarco.Infographic, photo: http://www.buffalo.edu/news/releases/2016/03/026.html. The current study grew out of previous research involving the ECFP that demonstrated how its implementation reduced different types of aggression and peer victimization broadly at the classroom level.

“We needed to show that the program worked to change the individual child’s behavior,” says Ostrov, an expert in subtypes of aggression who served as a panel member for the uniform definitions of bullying at the Centers for Disease Control and Prevention. “We also expanded the study at the request of teachers, adding two weeks that addressed additional social skills and emphasized sharing, helping and including other children.”While the previous research focused on general aggressive behavior, the follow up closely examines bullying behavior.

“All bullying is aggression, but not all aggression is bullying,” says Ostrov. “Bullying’s starting point is aggressive behavior,” says Ostrov. “But what makes bullying a subset of aggressive behavior is a power imbalance, where for example one child is older, physically bigger or more popular than their victim. That’s followed by either repetition of the unwanted and intentional behavior or a fear the behavior will repeat itself.”The study developed a new measure that helps assess bullying behavior in an age group where it wasn’t previously thought to exist. It also expanded on its predecessor by examining different types of bullying, including relational bullying.

“This is a form of social exclusion that uses the threat of the removal of the relationship as a means of harm,” says Ostrov. “It’s occurs when a child might say to another, ‘You can’t play with us’ or ‘you’re not my friend anymore.’”The ECFP is added to a preschool class’s circle time. It’s a 10-minute puppet show that emphasizes a different theme each of the eight weeks (see Infographic, top right). The puppet presents a developmental problem the children are likely to encounter and asks their help to solve the problem.Interventionists are also in the classroom about three hours a week, reinforcing and praising positive behaviors. The children, meantime, are also looking for these behaviors and reporting when they see others doing good things.

The program concludes with a graduation.“We’re seeing a significant effect for relational bullying that’s quite notable – and it doesn’t require a lot of time.” says Ostrov. “You can go into these classrooms and with minimal interaction with the kids see relatively big returns on your investment.”In fact, researchers found the program so effective that at the conclusion of the study, they went back to deliver the intervention to the control group, which initially did not have the ECFP in their classroom.“We saw from the first study that this was effective and we wanted all the children to receive the intervention,” says Ostrov. “It wasn’t ethical to say, ‘you’re in the control group so you don’t get anything.”Ostrov says the ECFP is manualized with detailed instructions, and though much of the program’s material might be occurring in some environments it’s not specifically packaged to target bullying behaviors.

“We still need more work before we can export this on a larger scale,” says Ostrov. “But fundamentally, it won’t require a lot of training and it can be done with one teacher in the classroom.”