SIDS Center of New Jersey Works with Families, Professionals to Help Save Lives for 25 Years 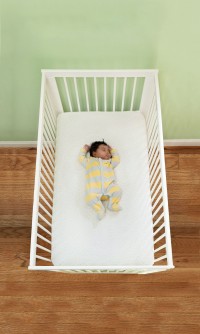 * Images courtesy of the Safe to Sleep® campaign, for educational purposes only; Eunice Kennedy Shriver National Institute of Child Health and Human Development, http://www.nichd.nih.gov/sids; Safe to Sleep® is a registered trademark of the U.S. Departmen 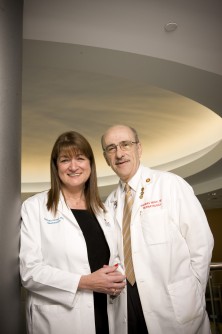 Newswise — New Brunswick, NJ -- On the cover of a popular consumer magazine, the latest celebrity mom holds her adorable newborn. The centerfold is emblazoned with images of the baby’s nursery with a crib filled with soft, frilly bedding, pillows and stuffed animals. Barbara Ostfeld cringes; the photos perpetuate a message she is trying to dismantle. The overstuffed crib, with all its beautiful accessories, is an unsafe sleeping environment for an infant.

Providing a safe sleep environment—with a firm mattress, fitted sheet and nothing else in the crib—is among the recommendations the American Academy of Pediatrics (AAP) has put forth in its guidelines to reduce the risk of SIDS, or Sudden Infant Death Syndrome. Defined as the sudden death of an infant less than 12 months old which remains unexplained even after thorough investigation, SIDS is the leading cause of death of infants from 1 month to 1 year of age.

“Sadly, SIDS is a rule-out diagnosis; families do not have an explanation for why their infant died,” says Ostfeld, a developmental psychologist and program director of the SIDS Center of New Jersey at Rutgers Robert Wood Johnson Medical School. “It’s one of the common threads among affected families that allow them to bond and support each other as they grieve.”

Pam McElgunn remembers each detail of Super Bowl weekend 1994 precisely, as if it happened yesterday. The melting snow flooded her basement on Friday. She became sick that weekend, and their washing machine broke with a full load of wet towels in it.

“I remember thinking that it just couldn’t get any worse,” said McElgunn.

The detailed memories continue into Monday, when McElgunn went shopping for her son Paul’s Christening the following weekend. On Tuesday, February 1, she took her older son to preschool, came home, put Paul down for his nap and took a shower while her daughter, then a toddler, watched TV. Knowing she had to feed Paul before returning to the preschool, McElgunn went to wake him and found him unresponsive. Only 45 minutes had passed. She called 9-1-1 and then a friend.

“I was sitting in the kitchen while the EMTs tried to revive him; I kept waiting to hear him cry,” she said.

McElgunn found solace through a peer support group at the SIDS Center of New Jersey. “Speaking with others helped me to know that I wasn’t alone,” she recalled, soon finding that listening also helped her heal.

“I had a great support system of family and friends, but not everyone who loses a child to SIDS does,” she explained. “Slowly, I became a peer supporter, first serving as a phone counselor and helping other families understand that they weren’t alone, assuring them that the healing process is different for everyone, and that there is no timetable for grief.”

Like many families, the McElgunns established an annual event to keep their son’s memory alive and help others. The Paul R. McElgunn Memorial Golf Tournament raised more than $900,000 during 15 years and supported SIDS education programs, in addition to charities of friends who also lost children at a young age. “The annual event was part of our family’s healing process. Though you can’t fix it or make it better, you can breathe again and move forward,” McElgunn said.

The SIDS Center of New Jersey has been a part of that healing process for many families since its founding in 1988. It has also expanded its mission to include risk-reduction educational programs.

“Research began emerging in the early 1990s that yielded strong evidence of the sleep conditions that elevate the risk of SIDS,” explained Ostfeld. In 1992, the American Academy of Pediatrics issued its first set of guidelines, which led to the national Back-to-Sleep campaign, launched in 1994. Utilizing evidence-based research, including studies published by Ostfeld and the SIDS Center’s Medical Director Thomas Hegyi, a neonatologist, and its program coordinator Linda Esposito, a nurse, the AAP has expanded its guidelines numerous times.

“The expanded guidelines into sleep-related deaths offer strategies to prevent unexplained deaths, as well as deaths from accidental suffocation,” said Hegyi, who explained that suffocation often results from the decorative items in cribs, such as pillows and bumpers. The AAP also recommends the use of a pacifier and a one-piece sleeper, instead of a blanket. Eliminating a child’s exposure to tobacco smoke also is strongly recommended.

Evidence has shown that the AAP’s safe sleep guidelines and the SIDS Center’s efforts have made an impact in New Jersey. Since the onset of risk reduction education in 1993 through 2009, the New Jersey and national rates of SIDS have been cut in half according to data from the New Jersey Department of Health and the Centers for Disease Control and Prevention, respectively. In an article released by JAMA Pediatrics in September, a study found that bed-sharing—one of the greatest risks for SIDS—continues to increase nationally, particularly in minority families, despite the prevalence of the safe sleep guidelines. New Jersey’s statistics are contrary to this trend, however, as it has experienced a 32 percent decline in the use of bed-sharing within the African American community between 2003 and 2010, according to New Jersey’s Pregnancy Risk Assessment Monitoring System.

“The AAP guidelines are very clear; babies should not sleep in an adult bed, or on a sofa or a chair, with a parent or someone else,” Hegyi emphasized. “Instead, place a safety-approved crib in the parents’ room.” Room-sharing, he said, is very beneficial and improves bonding between an infant and his or her parents. “With a safety-approved crib in the room, parents may easily sooth an infant without increasing the risks of SIDS.”

Now in its 25th year of service, the SIDS Center continues to provide ongoing, intensive statewide educational programs in line with the AAP’s guidelines to health, social service and child care professionals. With grant funding from the New Jersey Department of Health to Rutgers Robert Wood Johnson Medical School and through community collaborations, including those with the Maternal and Child Health Consortia and the New Jersey Department of Children and Families, the SIDS Center has trained thousands of physicians, nurses, child care providers, social workers, and other caregivers. Its public health initiatives are culturally sensitive and address all age groups, from students to grandparents. The center’s educational and bereavement services also address Sudden Unexplained Death in Childhood, defined as the sudden unexplained and unexpected death of a child over the age of 12 months.

“At its core are the New Jersey parents, families, and communities who benefit from our programs,” said Alissa Sandler, a licensed clinical social worker and section chief, SIDS Center of New Jersey at the Joseph M. Sanzari Children’s Hospital at Hackensack University Medical Center (HackensackUMC), home to the center's northern location. “Experiencing the tragic death of an infant or young child forever changes a family’s perspective, hopes and dreams.”

Dignora Aquino saw her world change in January 2012, with the death of her 3-month-old son, Matthew. It was Aquino’s first morning back to work following maternity leave, and she received a call at the office saying Matthew had stopped breathing.

“The doctors were still trying to save Matthew when I arrived at the hospital; they did everything they could,” she explained.

Anna Irizarry-Wood, a licensed clinical social worker at the SIDS Center at HackensackUMC, learned of Matthew’s death by a call to the SIDS Center’s hotline from the county medical examiner’s office.

“Anna called me as I was driving home from the hospital,” Aquino recalled, noting that Irizarry-Wood would continue reaching out to help through the grieving process.

“I found the online support group most helpful,” Aquino said. “Connecting with others who have experienced the same loss helps you understand that the emotions you are feeling are normal.”

Aquino established The Matthew Angelo Scarpa Foundation. In addition to raising awareness about the risks of SIDS, the foundation raises funds to give scholarships to inner-city high school students based on academic achievement, community service and financial need. Its annual run/walk was held September 29 of this year, on what would have been Matthew’s second birthday.

Another common thread among affected families, according to Ostfeld, memorial foundations allow family and friends to participate in the healing process and help the SIDS Center of New Jersey educate others about the safe sleep guidelines.

“Babies do not have to die,” said Ostfeld. “We know what the risk factors are and how to reduce them. Following the guidelines of the AAP will save infants lives.”

SIDEBAR:The American Academy of Pediatrics’ safe sleep guidelines include the following recommendations:• Always place your baby on his or her back for every sleep time.• Always use a firm sleep surface. Car seats and other sitting devices are not recommended for routine sleep.• Babies should sleep in the same room as the parents, but not in the same bed (room-sharing without bed-sharing).• Keep soft objects or loose bedding out of the crib. This includes pillows, blankets, and bumper pads.• Wedges and positioners should not be used.• Don’t smoke during pregnancy or after birth.• Offer a pacifier at nap time and bedtime.• Avoid covering the infant’s head or overheating.• Infants should receive all recommended vaccinations. Evidence suggests that immunization reduces the risk of SIDS by 50 percent.• Breastfeeding is recommended and is associated with a reduced risk of SIDS.• Supervised, awake tummy time is recommended daily to facilitate development and minimize the occurrence of positional plagiocephaly (flat heads).Additional information from the AAP is available at www.healthychildren.org/safesleep.

Robert Wood Johnson Medical School encompasses 20 basic science and clinical departments, and hosts centers and institutes including The Cardiovascular Institute, the Child Health Institute of New Jersey, the Center for Advanced Biotechnology and Medicine, the Environmental and Occupational Health Sciences Institute, and the Stem Cell Institute of New Jersey. The medical school maintains educational programs at the undergraduate, graduate, and postgraduate levels for more than 1,500 students on its campuses in New Brunswick and Piscataway, and provides continuing education courses for health care professionals and community education programs. To learn more about Robert Wood Johnson Medical School, visit rwjms.rutgers.edu. Find us online at facebook.com/RWJMedicalSchool and twitter.com/RWJMS. 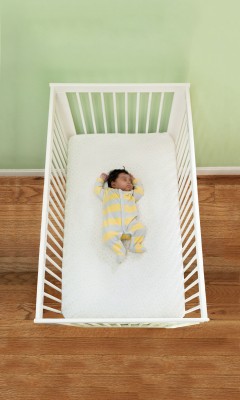 Credit: * Images courtesy of the Safe to Sleep® campaign, for educational purposes only; Eunice Kennedy Shriver National Institute of Child Health and Human Development, http://www.nichd.nih.gov/sids; Safe to Sleep® is a registered trademark of the U.S. Departmen 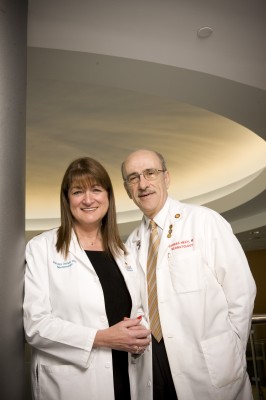