After multiple brain aneurysms and an unexpected hemorrhage, Frances Odin was given a very poor chance of surviving surgery. However, because of an excellent team of physicians, a dedicated staff and ‘a miracle,’ she survived and has returned to a fully functioning life. 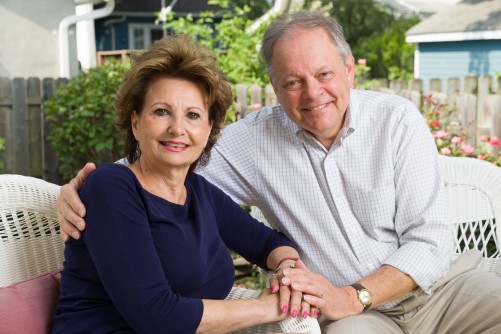 Rahway resident John Odin was told life-altering news last summer, his wife of 27 years, Frances, had a very poor chance of surviving surgery after multiple brain aneurysms. However, because of an excellent team of physicians, a dedicated staff and in John’s view, ‘a miracle,’ she survived and has returned to a fully functioning life.

Newswise — On August 16, 2017, Rahway resident John Odin was told life-altering news: his wife of 27 years, Frances, had a very poor chance of surviving surgery after multiple brain aneurysms. The previous few days were a blur as Fran, who was previously in good health, suffered an unexpected hemorrhage. However, because of an excellent team of physicians, a dedicated staff and in John’s view, ‘a miracle,’ she survived and has returned to a fully functioning life.

While on vacation in Manasquan, retired middle-school teacher Frances Odin had a severe frontal headache and vomiting unlike anything she had previously experienced. Fran and John believed it was food poisoning and after the pain subsided, went to bed. Fran doesn’t remember anything after that night until waking up in the hospital two days later.

The morning after her headache, Fran was not responsive and could not talk or stand. John drove Fran to Robert Wood Johnson University Hospital in Rahway and she was examined virtually. Because the CT scan of her brain demonstrated a hemorrhage, she was transported to Robert Wood Johnson University Hospital New Brunswick hospital where she underwent a CT Angiogram. It was determined that Fran had suffered a brain hemorrhage from a ruptured brain aneurysm. The bleeding in her brain had also clogged the brain's water system and she needed an emergency brain surgery to divert the brain fluid via a tube with a procedure called ventriculostomy.

The day after the draining procedure, John returned to the hospital where Fran was in surgical intensive care. He met with Gaurav Gupta, MD, FAANS, assistant professor of surgery and director, Cerebrovascular and Endovascular Neurosurgery at Rutgers Robert Wood Johnson Medical School, and Fawaz Al-Mufti, MD, former assistant professor of neurology, who shared that she had suffered a hemorrhage due to a rupture of an aneurysm. Dr. Gupta told John that this “couldn’t be more serious.”

He mentioned that Fran had multiple brain aneurysms and two of those aneurysms were extremely close to each other. According to Dr. Gupta, the seriousness arose because it was not obvious which aneurysm had ruptured, so the team of physicians needed to correct both simultaneously via an endovascular coiling surgery, which temporarily stopped the brain from bleeding and causing another rupture. Dr. Gupta shared that Fran’s case was very severe and challenging. This time, John fell into his chair with the realization that he would probably lose his wife.

After the three-hour coiling surgery where both the brain aneurysms were treated through a tiny incision in Fran’s groin, Dr. Gupta told John that everything went well and Fran made it successfully through surgery.

“Fran surviving was nothing short of divine intervention plus unbelievable doctors. The level of skill was beyond what I could imagine,” says Fran’s husband, John. A retired police detective who spent years in the homicide unit, John has vast experience interacting with doctors and nurses and believes this team was the best he had seen. Because timing is critical with these cases, Fran’s excellent neuro-critical care in the ICU led by Kiwon Lee, MD, professor of neurology, was also key to her survival.

Fran shared, “the doctors were great at explaining what happened. I didn’t feel like a patient, they got to know us.”

The day after surgery, Fran was alert and recognized everyone. A nurse commented that she had never seen someone recover from this surgery so quickly. After 12 days in intensive care, it did not appear that Fran would suffer any long-term cognitive problems.

A few months after the initial surgery, Fran returned to the hospital to permanently repair the aneurysms via a stent procedure with Dr. Gupta and his colleague Sudipta Roychowdhury, MD, clinical associate professor of radiology. Dr. Roychowdhury commented, “Complex cases like Ms. Odin’s can only be done at comprehensive stroke centers and large academic medical centers like RWJ.” It was at this time that the doctors were able to confirm that Fran was no longer in danger. Today, she takes a daily anti-seizure medication and started attending the RWJ brain aneurysm support group with her husband.

“I tell people going through similar experiences not to lose hope. Medicine has changed by leaps and bounds the past few years. Three years ago the doctors might not have been able to do this surgery. We are truly at the frontier of medicine,” says Fran.