New journal covers a wide range of responsible innovation topics such as the broader and more subtle issues of the moral, cultural, political, religious, democratic and sustainability implications of innovation and research 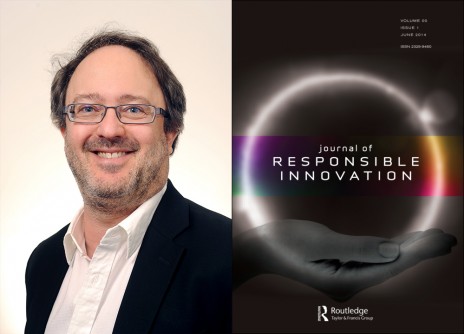 David Guston, director of the Center for Nanotechnology in Society at ASU, is founding editor-in-chief of the Journal of Responsible Innovation.

Newswise — Interdisciplinary scholars of responsible innovation have a new intellectual space to share, compare and debate their research and ideas with the release of the Journal of Responsible Innovation. David Guston, director of the Center for Nanotechnology in Society at Arizona State University and co-director of the Consortium for Science, Policy and Outcomes, is the journal’s founding editor-in-chief. He led an international team of scholars in proposing the academic journal to the British publishing house Taylor and Francis.

The journal covers a wide range of responsible innovation topics beyond traditional risk and environmental health and safety concerns, such as the broader and more subtle issues of the moral, cultural, political, religious, democratic and sustainability implications of innovation and research.

While responsible innovation is not an entirely new concept, a coalesced group of researchers around the topic, as well as a centralized publication space, is.

“The journal gives this emerging community a chance to address its research and policy concerns in a systematic and coherent fashion,” says Guston.

The journal aims to create an arena for interdisciplinary discussion among a range of responsible innovation scholars, “from people who, on the one hand, do the philosophy and ethics of science and technology, to the people on the other who do the more hardnosed, practical technology assessments,” says Guston. That range includes not only scholars developing and studying responsible innovation, but also policymakers implementing it, scientists and engineers attempting to practice it and all of those trying to teach it.

The journal will publish traditional journal articles and research reports, as well as reviews, discussion papers and perspectives on current political, technical and cultural events that don’t often lend themselves to succinct black and white conclusions. Pedagogical articles will round out the journal.

To that end, the first issue’s offerings include, among others, an empirical case study of the de facto governance of financial innovation in the private sector; a debate over whether attempting to envision the future is an effective practice for responsible innovation; a perspective on the new responsible innovation framework implemented by the Engineering and Physical Sciences Research Council of the United Kingdom; and a meditation on "Fixed," the award-winning documentary film about human enhancement technologies.

All of the journal’s associate editors are part of the new Virtual Institute for Responsible Innovation (VIRI), a project funded by the National Science Foundation (NSF) and also housed at ASU. The institute, international in scope, aims to understand responsible innovation and integrate it in academic, government and corporate settings.

“The co-location of journal with the virtual institute provides an extremely valuable opportunity to maximize synergies. A lot of what the institute's network is actively developing might end up being presented and analyzed in the journal,” says Erik Fisher, associate director of the Center for Nanotechnology in Society, assistant professor in ASU's School of Politics and Global Studies and an associate editor of the new journal. Fisher leads the NSF-funded project “Socio-technical Integration Research," also known as STIR, which embeds social scientists and humanists in natural science laboratories.

Guston’s leadership with the center for nanotechnology also adds to this synergy, as the center has led the development of a vision for anticipatory governance by building capacities to anticipate research challenges and outcomes, increase public engagement in the innovation process and integrate perspectives from social and natural scientists, engineers, humanists, ethicists and others around responsible innovation.

While the first issue is international in scope, Fisher anticipates that future issues of journal will also have multinational themes. “Various regional and national approaches to responsible innovation can be displayed, explored, distinguished and compared in the journal,” says Fisher.

The journal will publish three issues per year, and submissions are welcome year-round.