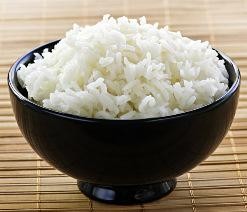 A new, easy method for cooking rice could reduce calories by as much as 60 percent.

Newswise — DENVER, March 23, 2015 — Scientists have developed a new, simple way to cook rice that could cut the number of calories absorbed by the body by more than half, potentially reducing obesity rates, which is especially important in countries where the food is a staple.

The presentation will take place here at the 249th National Meeting & Exposition of the American Chemical Society (ACS), the world’s largest scientific society. The meeting features nearly 11,000 reports on new advances in science and other topics. It is being held through Thursday.

The number of people who are overweight or obese is steadily increasing. As lifestyles change and people become more sedentary, their diets also change. Serving sizes grow, and more food options become available. In addition to consuming more fats and sugars, people may choose to fill up on starchy carbohydrates like rice, which has about 240 calories per cup.

“Because obesity is a growing health problem, especially in many developing countries, we wanted to find food-based solutions,” says team leader Sudhair A. James, who is at the College of Chemical Sciences, Colombo, Western, Sri Lanka. “We discovered that increasing rice resistant starch (RS) concentrations was a novel way to approach the problem.” By using a specific heating and cooking regimen, he says, the scientists concluded that “if the best rice variety is processed, it might reduce the calories by about 50-60 percent.”

He explains that starch can be digestible or indigestible. Starch is a component of rice, and it has both types. Unlike digestible types of starch, RS is not broken down in the small intestine, where carbohydrates normally are metabolized into glucose and other simple sugars and absorbed into the bloodstream. Thus, the researchers reasoned that if they could transform digestible starch into RS, then that could lower the number of usable calories of the rice.

And rice is loaded with starch (1.6 ounces in a cup), says James. “After your body converts carbohydrates into glucose, any leftover fuel gets converted into a polysaccharide carbohydrate called glycogen,” he explains. “Your liver and muscles store glycogen for energy and quickly turn it back into glucose as needed. The issue is that the excess glucose that doesn’t get converted to glycogen ends up turning into fat, which can lead to excessive weight or obesity.”

The team experimented with 38 kinds of rice from Sri Lanka, developing a new way of cooking rice that increased the RS content. In this method, they added a teaspoon of coconut oil to boiling water. Then, they added a half a cup of rice. They simmered this for 40 minutes, but one could boil it for 20-25 minutes instead, the researchers note. Then, they refrigerated it for 12 hours. This procedure increased the RS by 10 times for traditional, non-fortified rice.

How can such a simple change in cooking result in a lower-calorie food? James explains that the oil enters the starch granules during cooking, changing its architecture so that it becomes resistant to the action of digestive enzymes. This means that fewer calories ultimately get absorbed into the body. “The cooling is essential because amylose, the soluble part of the starch, leaves the granules during gelatinization,” explains James. “Cooling for 12 hours will lead to formation of hydrogen bonds between the amylose molecules outside the rice grains which also turns it into a resistant starch.” Reheating the rice for consumption, he notes, does not affect the RS levels.

He says that the next step will be to complete studies with human subjects to learn which varieties of rice might be best suited to the calorie-reduction process. The team also will check out whether other oils besides coconut have this effect.