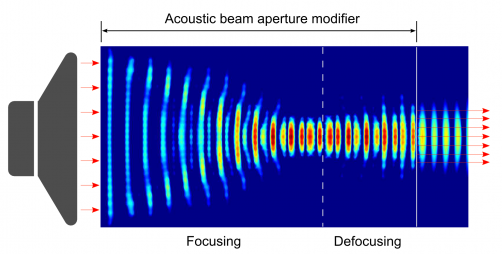 The acoustic beam aperture modifier can effectively shrink or expand the aperture of an acoustic beam with minimum energy loss and waveform distortion. With such an acoustic lens, the need for a series of expensive transducers of different sizes is eliminated.

Newswise — In a cover article in The Journal of Applied Physics, a team of Penn State researchers has designed and computationally tested a type of manmade metamaterial capable for the first time of manipulating a variety of acoustic waves with one simple device. This invention will benefit almost all current sonic and ultrasonic applications, such as ultrasonic nondestructive evaluations and ultrasonic imaging. The device should also provide more accurate and efficient high-intensity focused ultrasound(HIFU) therapies, a non-invasive heat-based technique targeted at a variety of cancers and neurological disorders.

According to post-doctoral scholar and the paper’s lead author, Sz-Chin Steven Lin, while other types of acoustic metamaterials also could focus and defocus an acoustic beam to achieve beam aperture modification (although prior to this work no such beam modifier has been proposed), their device possesses the advantage of small size and high energy conservation. Currently, researchers and surgeons need to have many transducers of different sizes to produce acoustic waves with different apertures. This is analogous to having to swap out lenses on a camera to change the lens’s aperture. With this invention, by changing the modifier attached to the transducer the desired aperture can be easily attained. “Design of acoustic beam aperture modifier using gradient-index phononic crystals,” by Lin, Bernhard Tittmann, and Tony Jun Huang, is the first design concept for an acoustic beam aperture modifier to appear in the scientific literature, and no acoustic beam modifier device is available in the market. As a result, the authors expect their device could have wide applications across several important acoustic fields, from medical ultrasound to higher sensitivity surface acoustic wave sensors to higher Q factor resonators. The team is currently making a prototype based on this design.

The Materials Research Institute is Penn State’s home for interdisciplinary materials research, supporting over 220 engineers and scientists and 800-plus graduate students, post-docs and visiting scientists. Visit MRI at www.mri.psu.edu for other recent materials discoveries at Penn State.

The Journal of Applied Physics