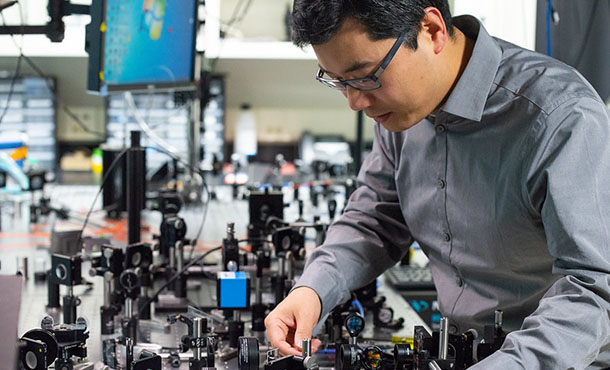 Xingjie Ni, assistant professor of electrical engineering, developed a new technology to break the reciprocity of light propagation with a method of high-speed temporal modulation. 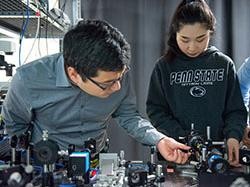 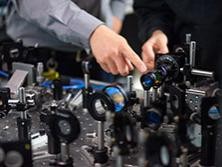 Ni and electrical engineering graduate student Xuexue Guo turn a wave plate to fine-tune the polarization of the input light.

Newswise — UNIVERSITY PARK, Pa. — A novel method to prevent light from reflecting back in optical devices could allow advancements in several scientific fields, including optical communications, laser systems and electronics, according to a team of Penn State electrical engineers. Led by Xingjie Ni, assistant professor of electrical engineering, the researchers published their work in a recent issue of Light: Science & Applications.

“In communications, for example, if you send a signal out, you don’t want it coming back to the detector on your side,” Ni said. “Laser systems are similar. When the laser sends light out, it doesn’t want that light coming back because that will disturb or even damage the system.”

The principle of reciprocity of light propagation states that light transmits the same both ways be it from the source to the detector or reversed. For most optical devices, the intent is to have a light signal travel in one direction, but not reflect back from the target to the source, because this would interfere with subsequent signals.

Before Ni’s research, methods and technology to break light reciprocity existed, but they had several limiting factors, including their large size and weight, which made it difficult to integrate into smaller systems or onto small electronic chips.

“Usually, a component called an optical isolator is built into those types of systems,” Ni said. “The problem with those isolators is that they are bulky, and the major reason for that is they almost exclusively utilize magneto-optic effect, so they need a large magnet built inside those components for them to have this one-way light operation.”

Optical isolators allow signals to pass in only one direction, while another device, an optical circulator, allows light to go from the source to the target, but shunts any returning light to a third location. Due to size, these devices are not usable in miniaturized systems.

Ni and his fellow researchers developed a new technology to break reciprocity not with a device that uses magnets but with a method of high-speed temporal modulation — a way to quickly vary the signal so the reflection follows a different path.

“We do a very fast temporal modulation on a specially designed artificial surface called a metasurface, which consists of millions of tiny nanometer-scale blocks, so that it breaks the time-reversal symmetry of the system,” Ni said. “When light interacts with that system, its propagation will be nonreciprocal.”

For Ni, the most exciting aspect of the technology he and his electrical engineering graduate students Xuexue Guo, Yimin Ding and Yao Duan developed is that it can be used in many areas to achieve results that were previously unattainable.

“Before the ultra-fast temporal modulation, people used other ways to do the modulation,” he said. “We are able to achieve multi-terahertz modulation speed, which is orders of magnitude greater than those previously reported. We can develop a larger category of materials that we call time-variant materials, which are a new type of material that hasn’t been explored that much.”

Ni said that being at Penn State was extremely helpful throughout the course of his research to develop this new technology.

“Penn State is great in terms of doing fundamental research and exploring new technologies,” he said. “Penn State has a world-class nanofabrication facility that makes it possible to make the small devices and structures that we wanted. Also, being at a big university, if you have problems or questions, it’s easy to find a person who is really an expert on that part and get their input.”

Funding for this research came from the Gordon and Betty Moore Foundation in the form of the inaugural Moore Inventor Fellowship, which was awarded to Ni in 2016, and from the Penn State Center for Nanoscale Science, which is a Materials Research Science and Engineering Center (MRSEC) and is supported by the National Science Foundation.

Caption: Xingjie Ni, assistant professor of electrical engineering, developed a new technology to break the reciprocity of light propagation with a method of high-speed temporal modulation.