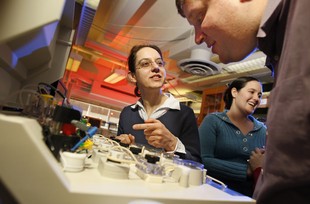 [Note: A multimedia version of this story is available on Exploration, Vanderbilt's online research magazine, at http://www.vanderbilt.edu/exploration/stories/nanoinsulin.html]

Newswise — A new method that uses nanotechnology to rapidly measure minute amounts of insulin is a major step toward developing the ability to assess the health of the body's insulin-producing cells in real time.

Among other potential applications, this method could be used to improve the efficacy of a new procedure for treating Type 1 (juvenile) diabetes that has demonstrated the ability to free diabetics from insulin injections for several years. It works by transplanting insulin-producing cells into the livers of diabetics to replace the cells that the disease has disabled or destroyed.

The new insulin detection method was developed by a team of Vanderbilt researchers headed by Associate Professor of Chemistry David Cliffel and is reported in the February 18 issue of the journal Analytica Chimica Acta.

To gain this capability, the researchers developed a new electrode for a device called a microphysiometer. The microphysiometer assesses the condition of living cells by placing them in liquid nutrient, confining them in a very small chamber and then measuring variations in their metabolism. The volume of the chamber is only three microliters " about 1/20th the size of an ordinary raindrop " allowing the electrode to detect the minute amounts of insulin released by special pancreatic cells called Islets of Langerhans.

The new electrode is built from multiwalled carbon nanotubes, which are like several flat sheets of carbon atoms stacked and rolled into very small tubes. Provided by William Hofmeister at the University of Tennessee Space Institute, the nanotubes are electrically conductive and the concentration of insulin in the chamber can be directly related to the current at the electrode and the nanotubes operate reliably at pH levels characteristic of living cells.

Current detection methods measure insulin production at intervals by periodically collecting small samples and measuring their insulin levels. The new sensor detects insulin levels continuously by measuring the transfer of electrons produced when insulin molecules oxidize in the presence of glucose. When the cells produce more insulin molecules, the current in the sensor increases and vice versa, allowing the researchers to monitor insulin concentrations in real time. It is similar to a device developed by another group of researchers that operated at acidity levels well beyond those where living cells can function.

Previous tests had shown that nanotube electrodes are more sensitive at measuring insulin than conventional methods. However, the researchers had to overcome a major obstacle to adapt them to work in the microphysiometer.

"One of the key advances of this project was finding how to keep nanotubes active on the surface without being washed away by microfluidic flows," Cliffel says.

Now that the microphysiometer has demonstrated the ability to rapidly detect the small quantities of insulin produced by individual cells, the researchers hope to use it to determine the health of the islet cells used for transplantation.

Researchers at the University of Alberta have shown that islet cells can be transplanted into a Type I diabetic and can greatly relieve insulin dependence for several years. Unfortunately these transplants require large doses of immunosuppressive drugs, and scientists don't yet know how these drugs affect the health of the islet cells.

One of the next steps is to use the microphysiometer to measure insulin, lactate and oxygen levels simultaneously. This will allow researchers to study how the islet cells react to the drugs and help identify the best way to deal with transplant rejection. It will also allow them to verify the health of the islets cells before they are transplanted into patients.