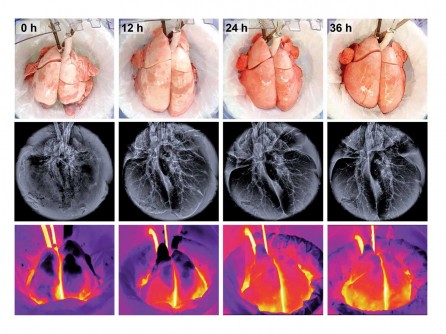 Photographic, radiographic and thermographic images of injured lungs recovered with extracorporeal cross-circulation. Lungs subjected to this novel therapy demonstrated normal function: perfusion, ventilation and gas exchange - after being outside of the body for 56 hours-- and could be effectively treated with drugs and therapeutic stem cells. Lung recovery over 36 hours is shown.

Newswise — New York, NY—March 6, 2017—A multidisciplinary team led by Gordana Vunjak-Novakovic, Mikati Foundation Professor of Biomedical Engineering and Medical Sciences at Columbia Engineering, and Matt Bacchetta, associate professor of surgery at Columbia University Medical Center and NewYork-Presbyterian has—for the first time—maintained a fully functional lung outside the body for several days. In a study published today on Nature Biomedical Engineering's website, the researchers describe the cross-circulation platform that maintained the viability and function of the donor lung and the stability of the recipient over 36 to 56 hours. They used the advanced support system to fully recover the functionality of lungs injured by ischemia (restricted blood supply), and made them suitable for transplant.

The team was inspired by the critical need to expand the pool of donor lungs. Transplantation remains the only definitive treatment for patients with end-stage lung disease, but the number of donor lungs is much smaller than the number of patients in need, and many patients die while on the wait list. In addition, lungs quickly lose their function outside the body and during transport: four out of five lungs evaluated at transplant centers are rejected. If these lungs could be kept viable outside the body long enough, it would be possible to improve their function and use them for transplantation.

Over the past five years, Vunjak-Novakovic has been collaborating with Bacchetta and Hans Snoeck, professor of medicine, to investigate how to improve low-quality donor lungs and possibly bioengineer lungs for transplantation. Rather than attempting to build new lungs, they developed strategies to rescue damaged donor lungs. One approach was to use a stem cell therapy of the lung to replace defective cells with new therapeutic cells derived from the transplant recipient. While this technique was applicable to low-quality lungs that are rejected for transplantation, there was a problem: the support of the lung outside the body was too short for the therapeutic cells to start improving lung function.

As often happens, unmet clinical needs inspire new ideas and drive the development of new technologies. The Columbia team realized that “cross circulation”—an abandoned surgical procedure used in the 1960s to exchange blood flow between two patients—could enable long-term support of living organs outside the body by providing critical systemic and metabolic factors that are missing from all current technologies. The team embraced this idea and devised an entirely new approach to support lungs outside the body long enough to enable therapeutic interventions needed to recover their health and normal function.

“This is the most complex study we have ever done, and the one with the highest potential for clinical translation,” Vunjak-Novakovic says. “The lung is a masterpiece of ‘engineering by nature,’ with its more than 40 cell types, and a gas exchange surface area of 100 square meters – half a tennis court. It is amazing that such an intricate organ can be maintained outside the body and even recovered following injury.”

“Our team worked hard to innovate a suite of imaging and targeted delivery technologies and ultimately completed this challenging, paradigm-shifting study in less than a year. This was only possible because of our uniquely talented team of bioengineers and surgeons, and the highly collaborative environment at Columbia that fosters innovation,” Vunjak-Novakovic says.

The team’s breakthrough was realizing that cross-circulation could be re-configured to help recover damaged donor organs. The study’s lead authors, PhD candidate John O’Neill and postdoctoral research fellow Brandon Guenthart, looked at clinical studies from the 1960s that used cross-circulation of blood between a healthy individual and a patient suffering from a critical but potentially reversible illness. Working in Vunjak-Novakovic’s Laboratory for Stem Cells and Tissue Engineering, they developed a radically new technology to support fully functional lung outside the body for several days.

“Our cross-circulation platform will likely allow us to extend the duration of support to a week or longer if needed, potentially enabling the recovery of severely damaged organs,” observes O’Neill. “Beyond prolonging support time, we also demonstrated several therapeutic interventions that vastly improve and accelerate recovery.”

As the team was developing their cross-circulation platform, they overcame many challenges to keep the lungs viable outside the body much longer than any platform had before. To prevent the outer surface of the lung from drying out and to provide normal body temperature, they designed a humidification system with ambient temperature control and a re-circulating warm water organ basin to provide normal body temperature to mimic the chest cavity.

Then they needed to tackle the perfusion circuit. To allow for adequate blood flow into and out of the lungs during cross-circulation, they developed new components and techniques and used a donor vessel as a “bio-bridge.” They engineered a dynamic system capable of height and hydrostatic pressure adjustments and feedback-regulated pressure-controlled flow. They also developed image-guided techniques for the controlled delivery of drugs and cells in precisely targeted regions of the lung without the need for repeated lung biopsies.

“As our work progressed, we continued to innovate out of necessity and refine and streamline our cross-circulation setup and procedure,” says Guenthart.

The researchers say their new platform could be readily extended to recover other organs that are in high demand for transplant or in need of repair, including livers and kidneys, and they have already begun studies in these directions.

Vunjak-Novakovic adds, “Our goal was to develop a platform that harnesses the full potential of tissue engineering and regenerative medicine toward organ rescue. We hope that our unique technology will benefit the many patients in need and help them live fuller and happier lives.”

The study was supported by grants from the National Institutes of Health (R01 HL120046 and U01 HL134760), Irving Institute for Clinical and Translational Research at Columbia University (CaMPR grants), the Richard Bartlett Foundation, and the Azmi Mikati Foundation.

###Columbia EngineeringColumbia Engineering is one of the top engineering schools in the U.S. and one of the oldest in the nation. Based in New York City, the School offers programs to both undergraduate and graduate students who undertake a course of study leading to the bachelor's, master's, or doctoral degree in engineering and applied science. Columbia Engineering’s nine departments offer 16 majors and more than 30 minors in engineering and the liberal arts, including an interdisciplinary minor in entrepreneurship with Columbia Business School. With facilities specifically designed and equipped to meet the laboratory and research needs of faculty and students, Columbia Engineering is home to a broad array of basic and advanced research installations, from the Columbia Nano Initiative and Data Science Institute to the Columbia Genome Center. These interdisciplinary centers in science and engineering, big data, nanoscience, and genomic research are leading the way in their respective fields while our engineers and scientists collaborate across the University to solve theoretical and practical problems in many other significant areas.

###LINKSPAPER: The DOI for this paper is 10.1038/s41551-017-0037. Once the paper is published electronically, the DOI can be used to retrieve the abstract and full text by adding it to the following url: http://dx.doi.org/http://bme.columbia.edu/gordana-vunjak-novakovichttp://www.engineering.columbia.edu/http://www.nature.com/natbiomedeng/Laboratory for Stem Cells and Tissue Engineering http://gvn.hostedplace.com/