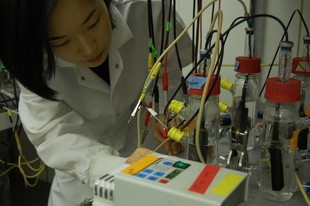 Newswise — In their most recent experiments with Geobacter, the sediment-loving microbe whose hairlike filaments help it to produce electric current from mud and wastewater, Derek Lovley and colleagues at the University of Massachusetts Amherst supervised the evolution of a new strain that dramatically increases power output per cell and overall bulk power. It also works with a thinner biofilm than earlier strains, cutting the time to reach electricity-producing concentrations on the electrode.

"This new study shows that output can be boosted and it gives us good insights into what it will take to genetically select a higher-power organism." The work, supported by the Office of Naval Research and the U.S. Department of Energy, is described in the August issue of the journal, Biosensors and Bioelectronics, now available online.

Findings open the door to improved microbial fuel cell architecture and should lead to "new applications that extend well beyond extracting electricity from mud," Lovley says. In the new experiments, the UMass Amherst researchers adapted the microbe's environment, which pushed it to adapt more efficient electric current transfer methods.

"In very short order we increased the power output by eight-fold, as a conservative estimate," says Lovley. "With this, we've broken through the plateau in power production that's been holding us back in recent years." Now, planning can move forward to design microbial fuel cells that convert waste water and renewable biomass to electricity, treat a single home's waste while producing localized power (especially attractive in developing countries), power mobile electronics, vehicles and implanted medical devices, and drive bioremediation of contaminated environments.

Geobacter's hairlike pili are extremely fine, only 3 to 5 nanometers in diameter or about 20,000 times finer than a human hair, and more than a thousand times longer than they are wide. Nevertheless, they are strong. Nicknamed nanowires for their role in moving electrons, pili are the secret to this particular microbe's ability to produce electric current from organic waste and sediment. Geobacter's pili seem critical for forming the biofilm which aids transfer of the electron products to iron in soil and sediment. In nature, bacteria colonies form gluey biofilms to anchor to a surface such as a tooth or an underwater rock, providing a living environment near a food source.

The Geobacter biofilm's "fortuitous" electron-transferring skill, the product of natural selection, suggested a pathway to Lovley"•a way he might use selective pressure to increase its capacity to produce power. He and colleagues grew Geobacter as usual on a graphite electrode, providing acetate as food and allowing a colony to form the biologically active slime, or biofilm where electron transfer takes place across the nanowires. But for this new experiment they added a tiny, 400-millivolt "pushback" current in the electrode that forced Geobacter to press harder to get rid of its electrons.

The result of providing a more challenging environment, within five short months, Lovley notes, was evolution of a beefed-up microorganism that can press at least eight times more electric current across the electrode than the original strain. "I'm really happy with this outcome," the microbiologist notes. "It's exceptionally fast feedback to us and a very satisfying result." He adds, "I'm still a little amazed that they make electricity, but I'm happy to be exploring how to harness that ability. I'm sure there'll be applications developed in the future that we can't even envision right now."

Lovley's first experiments with the anaerobic microbe, Geobacter, which he and colleagues discovered in sediment under the Potomac River in 1987, explored its use in decontaminating soil due to its ability to respire iron and other metals the way we breathe oxygen. Geobacter showed promise for a variety of bioremediation tasks, but the microbiologists further discovered in 2002 that it could produce electricity from the organic matter found in soils, sediments and wastewater. This ability appeared to be a feature of the electrically conductive pili, discovered in 2005. Together, these discoveries have led to intense research on how to harness the microbes for producing electricity in microbial fuel cells.

Microbial fuel cells, which convert fuel to electricity without combustion, consist of an electrode known as an anode that accepts electrons from the microorganisms, and another electrode known as a cathode, which transfers electrons onto oxygen. Electrons flow between the anode and the cathode to provide the current that can be harvested to power electronic devices.

Several high-resolution photographs are available for this story at: http://www.geobacter.org/publications/19487117/