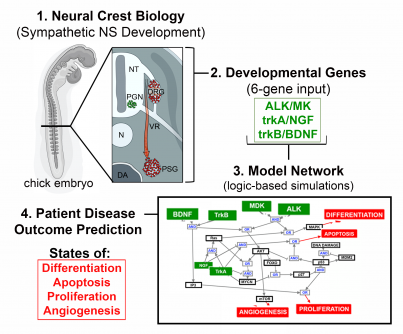 Newswise — KANSAS CITY, MO – Neuroblastoma, a rare childhood cancer of the sympathetic nervous system, is particularly deadly because it is difficult to detect and thus generally advanced before treatment begins. Scientists know that neuroblastoma develops from embryonic neural crest cells that fail to properly migrate or differentiate, but the details about exactly what causes these cells to go astray have been unclear.

Motivated by a desire to better understand the molecular circuitry underlying neuroblastoma and limitations of current methods for predicting disease progression and outcome, researchers from the Kulesa Lab at the Stowers Institute for Medical Research and collaborators at the University of Michigan and Oxford University set out to construct a logic-based model incorporating information about developmental signaling pathways implicated in the disease. They sought to test whether their model could predict disease outcomes more effectively than the current predictive methods, which are based on gene expression information from human patient samples but do not provide much insight about how these molecules interact to participate in disease progression.

Using a 6-gene input logic model, the team simulated a molecular network of developmental genes and downstream signals that predicted a favorable or unfavorable disease outcome based on the outcome of four cell states related to tumor development – cell differentiation, proliferation, apoptosis, and angiogenesis. The six genes of the model included three receptor tyrosine kinases involved in sympathetic nervous system development and implicated in neuroblastoma – trkA, trkB, and ALK – plus their three ligands.

The researchers checked the predictive value of their model by evaluating a known aggressively growing human neuroblastoma cell line for the six input genes and using that information to predict cell states and disease outcome, which were all confirmed.

Next, they determined the relevance of their model to the human disease population by testing it against a gene expression database of human neuroblastoma patients whose outcomes were known. The model proved to be 91% accurate in predicting outcomes in children less tha­­­n 2 years old. The accuracy of gene lists, the current approach for predicting outcomes, ranges from 75% to 80%.

Their findings were published online in April 2018 in Biophysical Chemistry, and are already garnering interest from clinicians. The article also appears in the July 2018 issue of the journal.

“Currently, doctors develop therapy strategies based on a combination of historical information about what’s worked for patients with similar gene markers and a general set of criteria that may or may not result in an individual patient's favorable outcome,” says Jennifer C. Kasemeier-Kulesa, Ph.D., a research specialist at the Stowers Institute and lead author of the study. “Our findings highlight the predictive strength of a logic-based model based on developmental genes and offer a better understanding of the molecular network interactions occurring in neuroblastoma.”

The study builds upon research published by the Kulesa Lab in Nature Communications that suggested the role trkB and BDNF signaling play in sympathetic neuron development.

“This model allows us to better understand the mechanics of the molecular network of receptor tyrosine kinase signaling and how the interplay between these genes and signals may lead to a favorable or unfavorable outcome in neuroblastoma patients,” says Kasemeier-Kulesa. “Within a day, our model could quickly simulate the overexpression or underexpression of a particular gene so that we can start to make predictions about how these genes play together.”

“Another reason this study is exciting for the team is because it’s work funded in part by Alex’s Lemonade Stand Foundation (ALSF),” said Paul Kulesa, Ph.D., Stowers director of imaging and lab head. “The Innovation Grant awarded to the lab by ALSF allowed us additional freedom to explore some research paths less traveled, such as the construction of computational models.”

Other contributors from the Stowers Institute included the histology and molecular biology scientific support facilities, Jason A. Morrison, Mary C. McKinney, Ph.D., and Irina Pushel. Mathematical biologists Santiago Schnell from the University of Michigan and Thomas Woolley of the University of Oxford, United Kingdom, partnered on development of the model.

Neuroblastoma, the most deadly cancer for infants and children younger than two years of age, is difficult to diagnose and treat. To improve the chances for survival, scientists have been searching for ways to better understand the cellular mechanics of what causes neuroblastoma and how it progresses. Using published research on molecular signals important in development and also implicated in neuroblastoma, researchers from the Kulesa Lab at the Stowers Institute for Medical Research and collaborators created a logic-based model that predicted the favorable or unfavorable outcomes of very young neuroblastoma patients with greater accuracy than current methods of predicting outcomes. This work, published in the July 2018 issue of Biophysical Chemistry, demonstrates the ability of such models to predict disease outcomes and offer a better understanding molecular network interactions in disease.