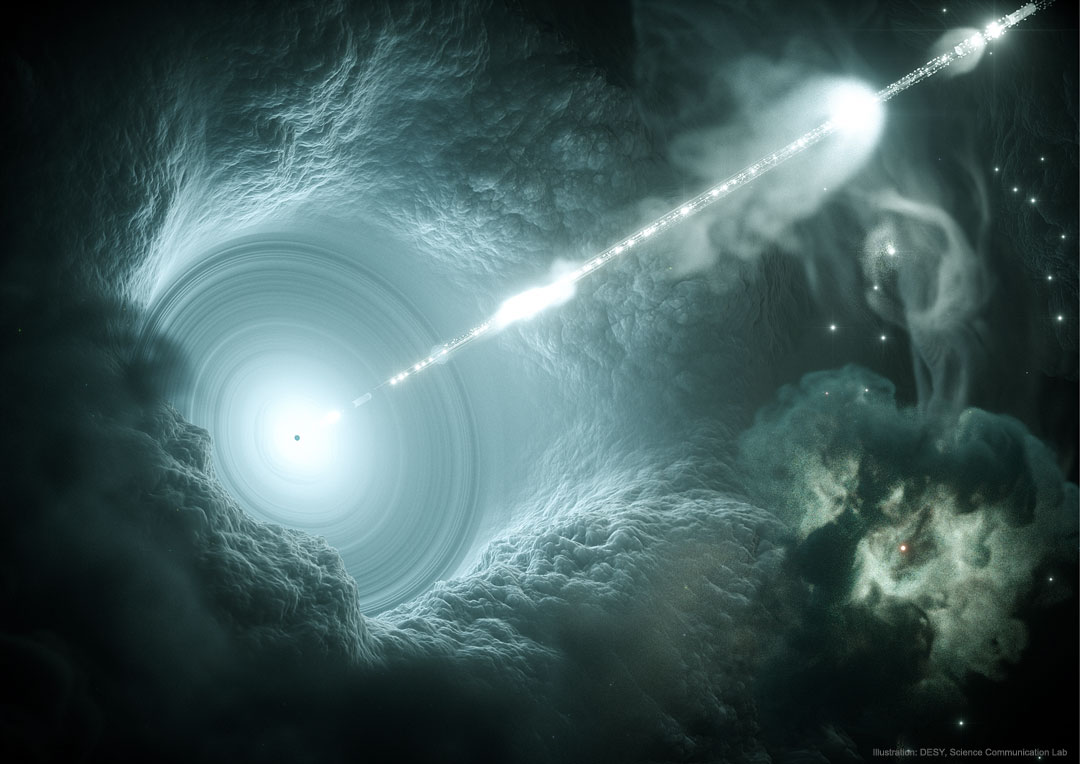 Credit: DESY, Science Communication Lab. Used with permission by Astronomy Picture of the Day (APOD), which is co-managed by Michigan Tech.

An artist's drawing of a particle jet emanating from a black hole at the center of a blazar.

Newswise — Astrophysicists Jon Hakkila of the College of Charleston and Robert Nemiroff of the Michigan Technological University have published research indicating that blasts that create gamma-ray bursts may actually exceed the speed of light in surrounding gas clouds, but do so without violating Einstein's theory of relativity.  Hakkila and Nemiroff propose that such superluminal jets could create the time-reversibility seen in gamma-ray burst light curves. These proposed jets, however, do not violate the Einstein's relativity because they only move faster than light does through the jet medium, not faster than light through vacuum.

Hakkila says that a good way to visualize this superluminal motion is to imagine someone on one side of a pond skipping a stone across the water in your direction. The frequently-hopping stone moves through the air between hops faster than the waves it generates move through water. Hakkila says you would see waves created by each skip of the approaching stone in reverse order, with waves from the most recent skip arriving first and those from the initial skip arriving last. This superluminal blast explanation retains many characteristics of accepted gamma-ray burst jet models, Hakkila says. Nemiroff adds, however, that their proposed scenario involves Cherenkov radiation, a type of light created by superluminal motion that was not previously thought to be important in generating the light curves of gamma-ray bursts.

The article "Time-Reversed Gamma-Ray Burst Light Curve Characteristics as Transitions between Subluminal and Superluminal Motion" appears in the recent issue of The Astrophysical Journal.