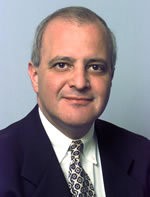 In brain injuries sustained when the head suddenly stops moving " during a motor vehicle accident, for instance " the force can shear and damage nerve cells. This kind of injury does not show up on computerized tomography scans, the researchers said, and magnetic resonance imaging does not yet reliably detect this type of injury.

"This is a new way of measuring a common injury that has been overlooked," said Dr. RamÃ³n DÃ­az-Arrastia, professor of neurology and senior author of the paper, which appears in the May issue of the journal Archives of Neurology.

"No matter how many seat belts and airbags there are, if you hit a tree at 50 miles an hour, you're going to have this kind of injury," Dr. DÃ­az-Arrastia said. "It may account for up to half of the traumatic brain injuries from car accidents."

The injury typically affects the portions of nerve cells in the brain called the axons, the long, thin extensions of nerve cells that reach from one area to another. When the brain is subjected to powerful, inertial forces, axons can be deformed and damaged. This type of trauma, called diffuse axonal injury, or DAI, is often difficult to diagnose, Dr. DÃ­az-Arrastia said.

In the study, the researchers performed MRI analysis on 12 people, ranging in age from 16 to 37, who had severe closed-head brain injury, who were either able to give consent or whose legal guardians gave consent.

From the patients' point of view, the test was the same as undergoing an ordinary MRI. The difference was that the researchers used a new mathematical analysis, called diffusion tensor tractography, to detect diffuse axonal injury. They also analyzed the MRI data using an existing method called FLAIR, for fluid attenuation and inversion recovery.

The new analysis tested for how easily water could move around in the brain in the areas surrounding cells. When the axons are damaged, they swell, absorbing the water around them and leaving less that can move around between cells. As the axons die, they release the water, resulting in more water surrounding the cells.

By comparing multiple MRI images over time, the researchers could detect this change in water motion. Their analysis focused on three areas of the brain " the corpus callosum, the fornix and the peduncular projections " that consist largely of axons that project from one part of the brain to another.

The researchers tested the patients' degree of consciousness and ability to care for themselves immediately after their injuries, as well as six to 11 months later. One patient died, and one had fully recovered, with the rest showing partial recovery. One patient could not be located for the follow-up.

In most of the brain areas studied, the degree of diffuse axonal injury, which is reflected by a reduction of the motion of water around the never cells, was significantly linked to how much the patients improved over time, the researchers found. In contrast, FLAIR analysis did not show a statistically significant link with the degree of recovery.

Further studies are under way to include more patients, which will provide more power to the analysis. The researchers will also study other areas of the brain that are at risk for diffuse axonal injury to see whether MRI analysis can be useful in those regions as well.

Lead author Jun-Yi Wang; Dr. Khamid Bakhadirov; and Dr. Herve Abdi from the department of cognition and neuroscience at UT Dallas also participated in the study.