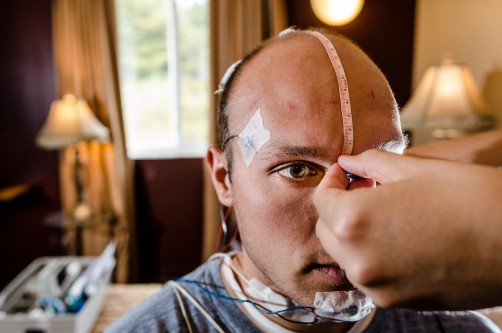 How does too much to drink affect how we sleep? Two Michigan Tech researchers have received $422,845 of a potential $1,871,688 five-year grant to study the effects of alcohol on sleep, blood pressure and the differences between how men and women process alcohol. This image is from a 2012 sleep apnea study.

Newswise — When a drink at the local watering hole turns into five or six, what are the effects on our brains and hearts? How does too much to drink affect how we sleep? How does binge drinking affect blood pressure for people who drink socially but not usually to excess? Do women’s bodies process alcohol differently depending on stages of their menstrual cycles?

These are some of the questions Jason Carter, professor and chair of the Department of Kinesiology and Integrative Physiology, and John Durocher, assistant professor of biological sciences, seek to answer during their five-year project titled "Alcohol and Neurovascular Control in Humans".

The project is funded by U.S. Department of Health & Human Services, NIH Research Project Grant Program with an initial $422,845 received this year of a potential $1,871,688.

“This has been a decade-long march for the institution to get to the point we have the infrastructure and the critical mass to compete for these grants,” Carter says, noting that it is the first top-tier NIH grant since Michigan Tech began seriously investing in health-related research in the late 2000s. “This is a major step to continue the growth of human health research at Michigan Tech.”

The researchers hypothesize that consuming too much alcohol in the evening leads to overactive neural and cardiovascular activity overnight and the subsequent morning—the times of day when humans are most susceptible to heart attacks and strokes. The National Institute on Alcohol Abuse and Alcoholism defines binge drinking as that which raises blood alcohol concentration (BAC) to 0.08 grams per deciliter. In men this typically occurs after imbibing five drinks in two hours, and in women, four drinks in two hours.

The study has three main goals. First, to determine whether evening binge drinking causes sleep apnea, neural disregulation and abnormal rhythms in blood pressure. Second, the researchers will examine whether these effects are more pronounced in women than in men and whether menstrual phases are a critical factor in determining how the body metabolizes alcohol. And third, whether continuous positive airway pressure (CPAP) will blunt the negative effects of evening binge drinking.

Durocher will help to lead the autonomic blood pressure measurements during the five-year project and he says he is excited about how the grant will help to enhance health-related research at the university.

Carter and Durocher hope that this work will advance preventative, and perhaps even therapeutic, efforts to reduce alcohol-induced accidents, hypertension, stroke and sudden cardiac death.

To test their hypotheses, researchers will use established techniques for assessing sleep including sleep studies during which blood pressure, blood oxygenation levels, breathing rate, and brain waves are recorded, tracking nerve impulses and monitoring blood flow to the fingers, and mood and hand-eye coordination performance.

This is the first randomized clinical trial at Michigan Tech. And the grant is the most recent—and most prominent—recognition of Michigan Tech’s growing contribution of research in the H-STEM (health, science, technology, engineering and math) fields.

“This is a real step forward for Michigan Tech,” Carter said. “This will hopefully continue the momentum of health sciences research.”

Carter said the next steps in the project include recruiting at least 80 men and women ages 21 to 40 to participate, hiring a full-time registered nurse to work with the research team, and establishing a two-bed accredited sleep-study center to support the research during the next five years.