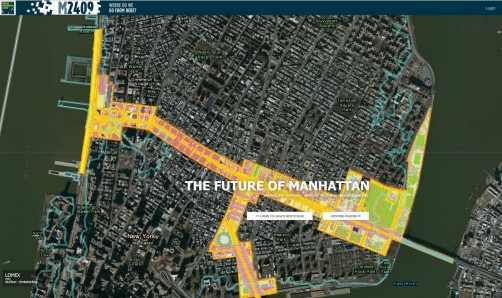 A new online tool developed by the Wildlife Conservation Society--Mannahatta2409.org--will enable New Yorkers to develop and share sustainable visions of New York City’s future, making it possible for the public to virtually plan their city block by block.

Newswise — A new online tool developed by the Wildlife Conservation Society will enable New Yorkers to develop and share sustainable visions of New York City’s future, making it possible for the public to virtually plan their city block by block.

Called Mannahatta2409.org, the first version of the new web application was publicly launched today. The online tool allows users to create and share visions comprised of ecosystems, lifestyles, and climate scenarios and measure their environmental performance in terms of water and carbon cycles, biodiversity and population for Manhattan. Developed by Dr. Eric W. Sanderson—Senior Conservation Ecologist at WCS—and Kim Fisher— a lead developer at WCS—Mannahatta2409.org will enable everyday visionaries to virtually change the city’s ecosystems (buildings, parks, forests, etc.), lifestyles, and climate as they create sustainable land-use plans for the Manhattan of tomorrow. Mannahatta2409.org builds on WCS’s successful Mannahatta Project, which imagined and examined the natural history of Manhattan prior to European settlement.

To create a “vision,” users log on to Mannahatta2409.org, select the block, neighborhood, or community district of interest, and examine the ecosystems of that area today and 400 years ago prior to European settlement. Users can then change the ecosystems using painting pools, as well as the lifestyle of people living there and the climate scenario. Participants can utilize 65 different ecosystem types, five lifestyle types ranging from average New Yorker to average American to Eco-hipster (the most environmentally conscious), and five climate scenarios spanning from 1609 to 2080.

Using over 10,000 parameters that are hyperlinked to the source documents, Mannahatta2409.org uses scientific methods, many adapted from the city’s own environmental review process, to estimate storm water flows, carbon emissions, species diversity, and human population density, as well as over 60 other metrics of environmental performance. When the user gets a vision he or she likes, they can then share it with everyone else through the forum, including over Facebook, Google+, or by simply posting a link to the user’s vision. The forum also supports discussion of individual visions.

The website is designed for everyone, from land-planning specialists such as architects, developers, and city managers, to students and members of the general public. “In the 21st century, science, imagination, and sharing allow us to overcome the false presumptions of our past relationship to the environment. We can collectively discover new solutions that simultaneously satisfy economy, culture, and nature,” said Dr. Eric W. Sanderson “Mannahatta 2409 is a tool for allowing the public to engage in long-term thinking and change for the city.”

Dr. Sanderson is the author of the critically acclaimed Mannahatta: The Natural History of New York City (2009) which made New Yorkers think differently about where they live. He also wrote Terra Nova: The New World After Oil, Cars, and Suburbs (Abrams, 2013), encouraging Americans to think differently about the way they live, and the impact of our oil-dependent economy on all aspects of our lives. His latest project, Mannahatta2409.org, is part of the WCS’s Cities and Wildlife initiative, which examines the relationships between cities and wildlife.

Future versions of Mannahatta2409.org will cover the other four boroughs of New York City and eventually other cities and localities where people live and care about their environment.

Mannahatta2409.org was supported by a 2011 NYC Cultural Innovation Fund grant from The Rockefeller Foundation, with additional support from The Summit Foundation, The Bay and Paul Foundations, Nimbo (nimbo.com), and Esri.