30-Aug-2016 9:00 AM EDT, by Columbia University School of Engineering and Applied Science
favorite_border 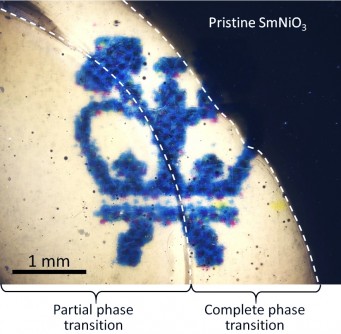 Prototype of a smart window. The picture shows a layer of phase-transition material SmNiO3 placed on top of a Columbia Engineering School logo. The transparency of the material can be controlled by electron doping under ambient conditions. Pristine SmNiO3 is opaque and electron-doped SmNiO3 is transparent. 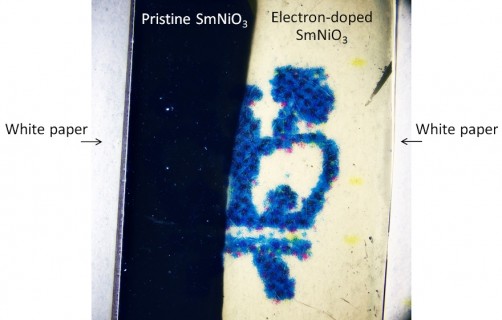 Photos of an optical modulator at two different states of SmNiO3. Pristine and electron-doped SmNiO3 show different colors due to their drastically different optical transparency. The device consists of a metasurface structure patterned on a thin film of SmNiO3 and a platinum back mirror, and it can modulate a narrow band of infrared radiation. Details of the metasurface structure can be seen in the following scanning electron micrographs.

Newswise — New York, NY—August 30, 2016—A team led by Nanfang Yu, assistant professor of applied physics at Columbia Engineering, has discovered a new phase-transition optical material and demonstrated novel devices that dynamically control light over a much broader wavelength range and with larger modulation amplitude than what has currently been possible. The team, including researchers from Purdue, Harvard, Drexel, and Brookhaven National Laboratory, found that samarium nickelate (SmNiO3) can be electrically tuned continuously between a transparent and an opaque state over an unprecedented broad range of spectrum from the blue in the visible (wavelength of 400 nm) to the thermal radiation spectrum in the mid-infrared (wavelength of a few tens of micrometers). The study, which is the first investigation of the optical properties of SmNiO3 and the first demonstration of the material in photonic device applications, is published online today in Advanced Materials.

“The performance of SmNiO3 is record-breaking in terms of the magnitude and wavelength range of optical tuning,” Yu says. “There is hardly any other material that offers such a combination of properties that are highly desirable for optoelectronic devices. The reversible tuning between the transparent and opaque states is based on electron doping at room temperature, and potentially very fast, which opens up a wide range of exciting applications, such as ‘smart windows’ for dynamic and complete control of sunlight, variable thermal emissivity coatings for infrared camouflage and radiative temperature control, optical modulators, and optical memory devices.”

Some of the potential new functions include using SmNiO3‘s capability in controlling thermal radiation to build “intelligent” coatings for infrared camouflage and thermoregulation. These coatings could make people and vehicles, for example, appear much colder than they actually are and thus indiscernible under a thermal camera at night. The coating could help reduce the large temperature gradients on a satellite by adjusting the relative thermal radiation from its bright and dark side with respect to the sun and thereby prolong the lifetime of the satellite. Because this phase-transition material can potentially switch between the transparent and opaque states with high speed, it may be used in modulators for free-space optical communication and optical radar and in optical memory devices.

Researchers have long been trying to build active optical devices that can dynamically control light. These include Boeing 787 Dreamliner’s “smart windows,” which control (but not completely) the transmission of sunlight, rewritable DVD discs on which we can use a laser beam to write and erase data, and high-data-rate, long-distance fiber optic communications systems where information is “written” into light beams by optical modulators. Active optical devices are not more common in everyday life, however, because it has been so difficult to find advanced actively tunable optical materials, and to design proper device architectures that amplify the effects of such tunable materials.

When Shriram Ramanathan, associate professor of materials science at Harvard, discovered SmNiO3‘s giant tunable electric resistivity at room temperature, Yu took note. The two met at the IEEE Photonics Conference in 2013 and decided to collaborate. Yu and his students, working with Ramanathan, who is a co-author of this paper, conducted initial optical studies of the phase-transition material, integrated the material into nanostructured designer optical interfaces—“metasurfaces”—and created prototype active optoelectronic devices, including optical modulators that control a beam of light, and variable emissivity coatings that control the efficiency of thermal radiation.

“SmNiO3 is really an unusual material,” says Zhaoyi Li, the paper’s lead author and Yu’s PhD student, “because it becomes electrically more insulating and optically more transparent as it is doped with more electrons—this is just the opposite of common materials such as semiconductors.”

It turns out that doped electrons “lock” into pairs with the electrons initially in the material, a quantum mechanical phenomenon called “strong electron correlation,” and this effect makes these electrons unavailable to conduct electric current and absorbing light. So, after electron doping, SmNiO3 thin films that were originally opaque suddenly allow more than 70 percent of visible light and infrared radiation to transmit through.

“One of our biggest challenges,” Zhaoyi adds, “was to integrate SmNiO3 into optical devices. To address this challenge, we developed special nanofabrication techniques to pattern metasurface structures on SmNiO3 thin films. In addition, we carefully chose the device architecture and materials to ensure that the devices can sustain high temperature and pressure that are required in the fabrication process to activate SmNiO3.”

Yu and his collaborators plan next to run a systematic study to understand the basic science of the phase transition of SmNiO3 and to explore its technological applications. The team will investigate the intrinsic speed of phase transition and the number of phase-transition cycles the material can endure before it breaks down. They will also work on addressing technological problems, including synthesizing ultra-thin and smooth films of the material and developing nanofabrication techniques to integrate the material into novel flat optical devices.

“This work is one crucial step towards realizing the major goal of my research lab, which is to make an optical interface a functional optical device,” Yu notes. “We envision replacing bulky optical devices and components with ‘flat optics’ by utilizing strong interactions between light and two-dimensional structured materials to control light at will. The discovery of this phase-transition material and the successful integration of it into a flat device architecture are a major leap forward to realizing active flat optical devices not only with enhanced performance from the devices we are using today, but with completely new functionalities.”

Yu’s team included Ramanathan, his Harvard PhD student You Zhou, and his Purdue postdoctoral fellow Zhen Zhang, who synthesized the phase-transition material and did some of the phase transition experiments (this work began at Harvard and continued when Ramanathan moved to Purdue); Drexel University Materials Science Professor Christopher Li, PhD student Hao Qi, and research scientist Qiwei Pan, who helped make solid-state devices by integrating SmNiO3 with novel solid polymer electrolytes; and Brookhaven National Laboratory staff scientists Ming Lu and Aaron Stein, who helped device nanofabrication. Yuan Yang, Assistant Professor of Materials Science and Engineering in the Department of Applied Physics and Applied Mathematics at Columbia Engineering, was consulted during the progress of this research.

Columbia Engineering Columbia Engineering is one of the top engineering schools in the U.S. and one of the oldest in the nation. Based in New York City, the School offers programs to both undergraduate and graduate students who undertake a course of study leading to the bachelor's, master's, or doctoral degree in engineering and applied science. Columbia Engineering’s nine departments offers 16 majors and more than 30 minors in engineering and the liberal arts, including an interdisciplinary minor in entrepreneurship with Columbia Business School. With facilities specifically designed and equipped to meet the laboratory and research needs of faculty and students, Columbia Engineering is home to a broad array of basic and advanced research installations, from the Columbia Nano Initiative and Data Science Institute to the Columbia Genome Center. These interdisciplinary centers in science and engineering, big data, nanoscience, and genomic research are leading the way in their respective fields while our engineers and scientists collaborate across the University to solve theoretical and practical problems in many other significant areas. 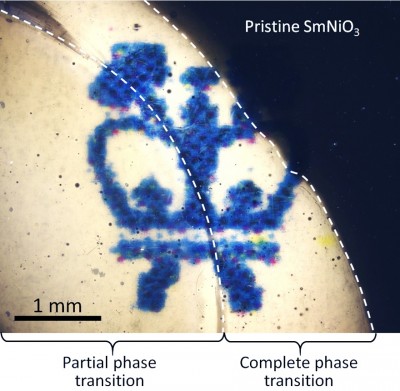 Caption: Prototype of a smart window. The picture shows a layer of phase-transition material SmNiO3 placed on top of a Columbia Engineering School logo. The transparency of the material can be controlled by electron doping under ambient conditions. Pristine SmNiO3 is opaque and electron-doped SmNiO3 is transparent. 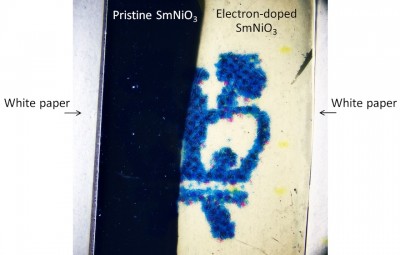 Caption: Photos of an optical modulator at two different states of SmNiO3. Pristine and electron-doped SmNiO3 show different colors due to their drastically different optical transparency. The device consists of a metasurface structure patterned on a thin film of SmNiO3 and a platinum back mirror, and it can modulate a narrow band of infrared radiation. Details of the metasurface structure can be seen in the following scanning electron micrographs.