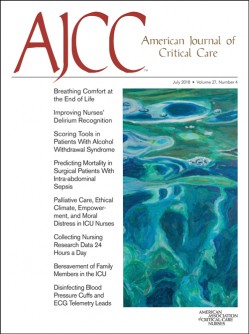 Newswise — A new classification system that scores the variables associated with mortality rates for patients who develop intra-abdominal sepsis after surgery may help guide care and improve outcomes.

A study in the American Journal of Critical Care (AJCC) finds that a scoring system based on the concept of Predisposition, Infection/injury type, Response and Organ dysfunction (PIRO) was useful in predicting mortality in surgical intensive care patients with severe sepsis or septic shock due to an intra-abdominal source.

The PIRO model is designed to improve the classification of patients across different degrees of illness severity, similar to how cancer is sorted into stages to describe its severity. PIRO scores have been developed for patients with severe sepsis, ventilator-associated pneumonia and other conditions, but this study is the first to evaluate the usefulness of a PIRO score for surgically related intra-abdominal sepsis.

To develop the PIRO score, a team from the University of Calgary in Canada reviewed data collected from 2005 through 2010 from more than 1,000 critically ill adult patients who were diagnosed with abdominal sepsis and admitted directly to a medical-surgical intensive care unit from the operating room at three hospitals in Canada. During the study period, 905 patients met the specific study criteria.

Once the researchers identified variables with statistical significance, they developed a multivariate PIRO model and assessed its relevance as a clinical prediction score.

They found that the resulting PIRO score was a more accurate indicator of mortality for these patients than existing, more data-intensive tools such as the Acute Physiology and Chronic Health Evaluation II and the Sequential Organ Failure Assessment.

The researchers review their process and share their findings in “Derivation of a PIRO Score for Prediction of Mortality in Surgical Patients With Intra-Abdominal Sepsis,” published in AJCC’s July 2018 issue.

“Our score is based on eight independent variables associated with mortality, data that is easily obtained at the bedside,” said co-author Juan G. Posadas-Calleja, MD, MSc, clinical associate professor, whose master’s thesis served as the impetus for the study. “Healthcare providers may be able to accurately and quickly predict mortality risk in surgical ICU patients by using a small card with our PIRO rating scale.”

The PIRO score included eight variables, each given the same weight:

On a scale of 0-8, the mean PIRO score for all patients in the study was 2.9, with higher mean scores for nonsurvivors (3.9) than for survivors (2.3). In addition, mortality increased as the PIRO score increased.

Future studies will look at validating the tool in other patients with sepsis due to an abdominal cause and assessing its applicability to patients with less severe sepsis as well.

About the American Journal of Critical Care: The American Journal of Critical Care (AJCC), a bimonthly scientific journal published by the American Association of Critical-Care Nurses, provides leading-edge clinical research that focuses on evidence-based-practice applications. Established in 1992, the award-winning journal includes clinical and research studies, case reports, editorials and commentaries. AJCC enjoys a circulation of more than 110,000 acute and critical care nurses and can be accessed at www.ajcconline.org.