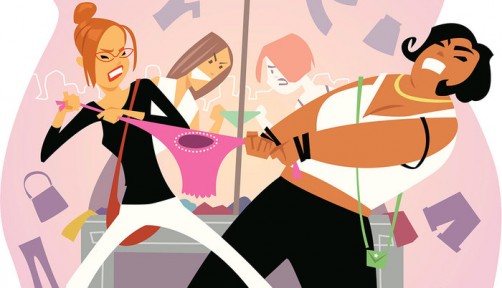 Consumers' psychological ownership can lead to territorial behavior, a risk for retailers.

Newswise — Since potential customers can feel psychologically attached to products even before making a purchase—a condition marketers are happy to capitalize on when it enhances their bottom line—marketing professors at New York Institute of Technology (NYIT), University of Wisconsin (UW)-Madison, and Clemson University show in a newly published paper the dark side of such feelings: territorial behavior, including negative word-of-mouth and other forms of retaliation.

In “Property Lines in the Mind: Consumers’ Psychological Ownership and Their Territorial Responses,” published recently in the Journal of Consumer Research, Colleen P. Kirk of NYIT, Joann Peck of UW-Madison, and Scott D. Swain of Clemson describe a series of studies establishing exactly when and how consumers become territorial about “their” property (whether it belongs to them or not).

Lead researcher Kirk said, “By carefully crafting five varied experiments and several smaller measures, we were able to show the risk marketers run in situations in which consumers feel psychological ownership of a product. Marketers need to be aware of these issues, because their actions and words might unknowingly elicit negative feelings associated with infringement.”

Prior research has shown that consumers develop psychological ownership of a product in three ways: by controlling the product, such as by touching it; by investing themselves in it, such as by customizing something; or by getting to know a product intimately, such as growing up with it or using it in a special way. Accordingly, the researchers looked at whether people signal to others their psychological ownership by communicating their control, self-investment, or intimate knowledge of a product. They also hypothesized that these messages from others would lead consumers to feel infringed when they already felt ownership of a product themselves.

To test their hypotheses, the researchers conducted five different experiments. The first two were actual behavioral studies, where the team observed territorial behaviors such as retaliation. The other three were scenario-based studies, in which participants imagined being in a scenario and reported how they would respond. Each experiment was designed to elicit or manipulate feelings of ownership in consumers and then to have others indicate psychological ownership of the same product.

The first experiment, which looks at customers in a café who notice that a server has touched their coffee cup, establishes what most of us know: when we feel that something is ours, we don’t like it when other people act like it’s theirs. Kirk et al. also show that the degree to which a customer feels infringed corresponds to a decrease in the server’s tip. In addition, a follow-up survey showed that customers who felt infringed were more likely to leave quickly and less likely to return to the café.

Consumers can also become territorial over intangible products, such as an artistic design. When, in another experiment, volunteers at a non-profit felt that an employee had infringed on a design they had created, they reacted in the same way the infringed coffee consumers did: they were less likely to help the employee retrieve a lost pen (a form of retaliation); they perceived the employee negatively; and they were less likely to spread positive word-of-mouth, donate to the non-profit, or return to volunteer again.

Interestingly, the people who perceived that the employee had attempted to appropriate their custom designs reported that they would be more likely to post a selfie with their design on social media. This is a way of communicating their claim to ownership and of defending against future infringement.

A third experiment elicited psychological ownership of a sweater in a retail store and then measured reactions when another customer either touched the sweater or asked permission and then touched it. Asking permission dampened consumers’ feelings of infringement and reduced territorial responses. However, consumers who felt infringed exhibited territorial responses including hostile expressions, picking up the sweater and holding it, and retaliating by not telling the infringer about money they had dropped.

A fourth experiment revealed nuance in people’s reactions to encroachment. In another coffee shop setting, researchers determined that participants were less likely to respond territorially when the infringer had no way to know of their own psychological ownership of a seat because they had not marked their territory with a belonging.

The last experiment stimulated participants’ psychological ownership of a delicious-looking pizza in an open-air market. The researchers also measured participants’ narcissism, finding that consumers high in narcissism were more likely to believe that others were aware of their feelings of ownership. Kirk said, “We find that people high in narcissism believe other people automatically know of their feelings of ownership for an attractive product, even when there is no way others could know.” Therefore, those high in narcissism were more likely than the low narcissists in the study to respond territorially when a stranger showed signs of psychological ownership of the same pizza, this time by communicating intimate knowledge about it.

These results alert marketers to the dangers of infringing on a customer’s psychological ownership. For example, a new sales clerk who displays too much pride in showing customers “his” offerings in “his” store may inadvertently be putting off long-time customers who also have feelings of ownership for the store and its offerings. Restaurant servers would be well-advised to acknowledge patrons’ psychological ownership with an “excuse me” before moving dishes for no apparent reason.

In addition, consumers may infringe on each other, even unintentionally, and these infringements can also affect consumer outcomes. Marketers can help by providing ways for consumers to protect their psychologically-owned items prior to purchase, such as with separator bars on conveyor belts and large shopping bags for temporarily holding items under consideration.

“This research has helped me not only in understanding territoriality and its implications in consumer behavior, but also to be more sensitive about when I might inadvertently be communicating feelings of ownership and eliciting territorial responses in others,” said Kirk. “Even my adult son felt infringed recently when he was telling me about a new product discovery he had made. I was unintentionally claiming ownership by telling him special details about the product that I already knew.”

By examining consumers’ “property lines in the mind,” this research offers a first step in using psychological ownership to explore how and when consumers perceive infringement and what kind of territorial responses can result.