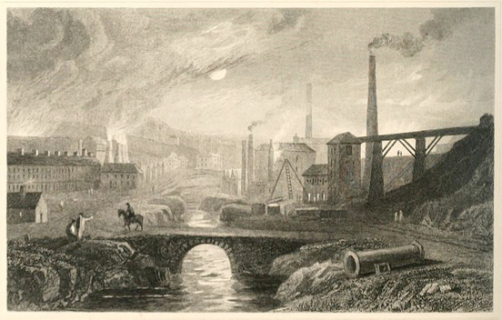 Ironworks in South Wales during the Industrial Revolution c.1820

Newswise — According to a new study, global warming began in the Arctic and tropical oceans before thermometers were widespread enough to record the early signal.

Northern Arizona University's Darrell Kaufman, Regents’ professor, and Nicholas McKay, assistant professor, along with scientists from around the world, recently discovered that human-caused global warming began in the mid-1800s.

Unlike the previous research that relied mostly on instrumental temperature records, McKay and Kaufman, who were co-authors of the study published in Nature, examined the climate variation found in corals, ice cores, tree rings and the changing chemistry of stalagmites in caves worldwide.

“We could detect the early signal of industrial-era warming by using long datasets that begin well before and extend well after this climatic change point. This gives the long view needed to detect the small but measurable climate response caused by the small increases in atmospheric greenhouse gases that were underway in the 19th century,” Kaufman said.

“Disentangling the human-caused warming from influences on climate can be difficult,” said McKay. “Climate model simulations where only greenhouse gases are changed show the same mid 19th century onset of industrial-era warming as what we find in proxy records of past climate. Large volcanic eruptions cooled the Earth during the early 1800s, but the climate simulations suggest that recovery of the climate from this volcanic cooling wasn't required to explain the early onset of industrial-era warming.”

The study provides new evidence of how quickly the Earth’s atmosphere responds to increased levels of greenhouse gas emissions, and suggests that even the small increase of carbon dioxide produced during the first decades of the Industrial Revolution was enough to make a measurable impact on the Earth’s climate.

The evolution of industrial-era warming across the continents and oceans will help scientists understand the future impact of greenhouse gas emissions on the planet. It also implies that humans have warmed the Earth more, and that we are closer to exceeding the safe limits of warming identified by international agreements than was previously thought.

The collaborative study involved 25 scientists from Australia, the United States, Europe and Asia, working together as part of the Past Global Changes international 2000 year (PAGES 2k) Consortium, a Future Earth core project.