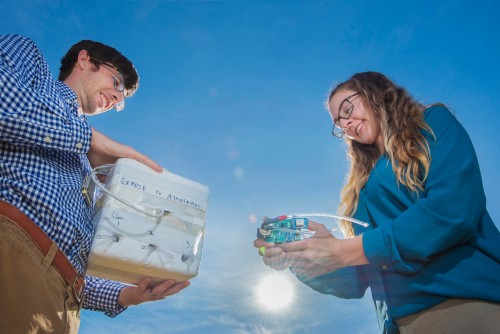 Sandia National Laboratories geophysicists Danny Bowman, left, and Sarah Albert display an infrasound sensor and the box used to protect the sensors from the extreme temperatures experienced by balloons that take the sensors twice as high as commercial jets fly. 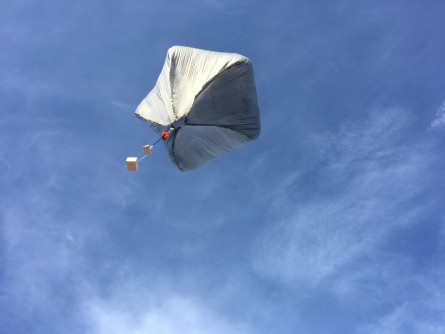 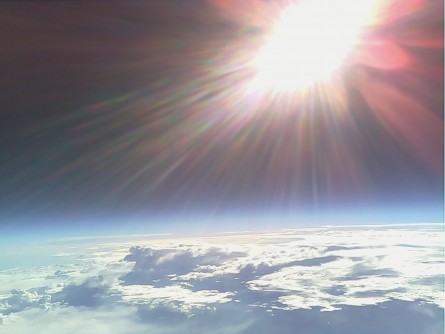 A view of the earth from one of Sandia National Laboratories’ solar-powered hot air balloons. The photo was taken last July at a height of about 13 miles.

Newswise — ALBUQUERQUE, N.M. — Sheets of plastic similar to that used for garbage bags, packing tape, some string, a little charcoal dust and a white shoebox-size box are more than odds and ends. These are the supplies Danny Bowman, a Sandia National Laboratories geophysicist, needs to build a solar-powered hot air balloon for detecting infrasound.

Infrasound is sound of very low frequencies, below 20 hertz, which is lower than humans can hear. African elephants produce infrasound for long-distance communication at around 15 hertz. For comparison, a bumblebee’s buzz is typically 150 hertz and humans hear in the range of 20 to 20,000 hertz.

Last July, a fleet of five solar-powered balloons reached a height of 13 to 15 miles, twice as high as commercial jets, and detected the infrasound from a test explosion. This experiment was funded by Sandia’s Laboratory Directed Research and Development program. Bowman presented the results at the American Geophysical Union conference in December.  The results will be published soon.

Infrasound is important because it’s one of the verification technologies the U.S. and the international community use to monitor explosions, including those caused by nuclear tests. Traditionally, infrasound is detected by ground-based sensor arrays, which don’t cover the open ocean and can be muddled by other noises, such as the wind. Bowman said air conditioners are also a common source of infrasound noise.

“The stratosphere is much less noisy so you can detect events of interest to science and national security from greater distances,” said Bowman. The stratosphere is the atmospheric layer from about 5 miles to 31 miles above the ground.

A solar-powered hot air balloon takes three hours for Bowman and fellow geophysicist Sarah Albert to make, and uses about $50 worth of materials, not including the reusable infrasound sensor or GPS tracker. The charcoal dust helps heat up the air inside the balloon, providing lift, without requiring helium gas, a nonrenewable resource.

The balloons can even be launched on partly cloudy days, said Albert. They stay up in the stratosphere all day and come down after the sun sets. This “guaranteed termination mechanism” is both a pro and con, said Bowman.

It’s a fool-proof way to bring down the balloons, the sensors and the data they have collected. On the other hand, longer flights would be useful. During the Arctic summer, the balloons could fly for weeks, but the team also is working on balloons that can stay aloft at night.

For future experiments, Bowman is interested in a balloon design with an insulator on the top surface of the balloon and absorber on the bottom, so it absorbs heat from the Earth to allow it to keep flying at night.

The most important aspect of this experiment is that the five balloons formed a 3-D array of sensors, said Albert. One sensor can hear a sound, but cannot provide any location information. Albert said, “My mom is deaf in one ear so it’s hard for her to tell where a sound is coming from.” Having two ears allows animals to determine the source of a sound.

Five microphones in an array, as in this experiment or ground-based sensor arrays, provide the same information — the direction from which the sound wave comes. Researchers coordinate the information from multiple arrays to triangulate the source of the sound.

Calculating where the sound wave is coming from can be a challenge when each sensor in the array is moving relative to each other and the source, said Bowman. A lot of computational algorithms assume stationary sensors, so the team needed to adapt them to include GPS information.

Future use in treaty monitoring and solar system exploration

Bowman is assisting a NASA Jet Propulsion Laboratory project to explore the possibility of using balloon-borne infrasound sensors on Venus to listen for Venus-quakes. Venus is similar to Earth in mass, but is geologically very different with no apparent plate tectonics.

Another possibility the team is exploring is flying infrasound sensors on Jupiter. Jupiter is a gas giant with open scientific questions about its internal structure and geology that infrasound could help answer. “We’re still decades out from an actual mission,” said Bowman. “But I’m excited to see how far it will go.”

Bowman said, “This is a really exciting new area of research. Balloon-borne infrasound sensors will never replace ground-based acoustic arrays, but I think it can augment them. And the most exciting thing is flying in the atmospheres of other planets and what we can learn from them.”