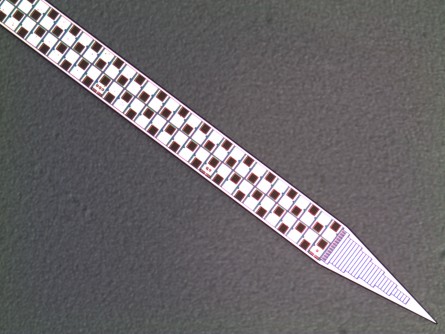 Neuropixels probes place hundreds of recording electrodes across a large span of a rodent’s brain, so that researchers can collect more meaningful data in a single experiment than other technologies currently allow. 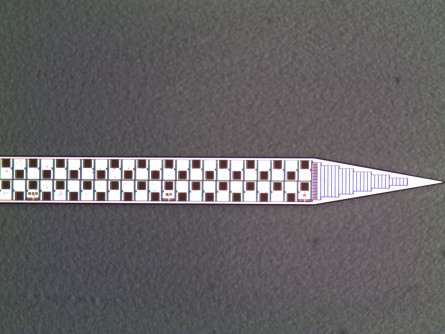 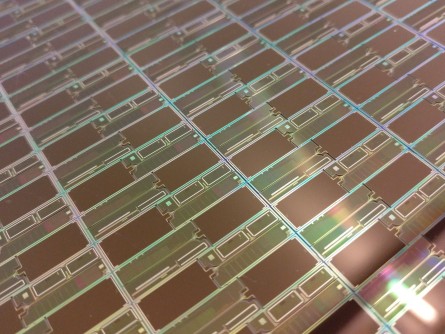 Newswise — Neuroscientists who want to follow the nervous system’s cellular conversations will soon have access to easy-to-use technology that simultaneously monitors neural activity at hundreds of different sites within the brain, thanks to a major engineering effort funded by the Howard Hughes Medical Institute (HHMI), the Allen Institute for Brain Science, the Gatsby Charitable Foundation, and Wellcome. The new probes are expected to give scientists a much clearer picture of how different parts of the brain work together to process information.

In a $5.5 million collaboration led by researchers at HHMI’s Janelia Research Campus, scientists at Janelia, the Allen Institute, and University College London (with grant funding from Gatsby and Wellcome) have worked over the past four years with engineers at imec, an international nanoelectronics research center in Leuven, Belgium, to build and test powerful new devices for detecting neural activity within the brains of living animals. The devices, called Neuropixels probes, place hundreds of recording electrodes across a large span of a rodent’s brain, so that researchers can collect more meaningful data in a single experiment than other technologies currently allow. Neuropixels probes are expected to be available for purchase by research laboratories by mid-2018. The new probes are described in an article published in the November 9, 2017 issue of Nature.

Some highlights from data presented in the Nature paper:

With nearly 1,000 electrical sensors positioned along a probe thinner than a human hair but long enough to access many regions of a rodent’s brain simultaneously, the new technology could greatly accelerate neuroscience research, says Timothy Harris, senior fellow at Janelia, leader of the Neuropixels collaboration. “You can [detect the activity of] large numbers of neurons from multiple brain regions with higher fidelity and much less difficulty,” he says.

Scientists from the consortium will present data collected using prototype Neuropixels probes at the Annual Meeting of the Society for Neuroscience in Washington, DC, November 11-15, 2017. Their results demonstrate that the probes, together with new methods of data analysis, can be used to track the activity of hundreds or even thousands of individual cells in disparate brain regions. There are currently more than 400 prototype Neuropixels probes in testing at research centers worldwide, including 20 labs affiliated with Gatsby and Wellcome such as the Sainsbury Wellcome Centre, eight HHMI labs and are being used at large scale by researchers at the Allen Institute.

“At the Allen Institute for Brain Science, one of our chief goals is to decipher the cellular-level code used by the brain,” says Christof Koch, President and Chief Scientist at the Allen Institute for Brain Science. “The Neuropixels probes represent a significant leap forward in measurement technology and will allow for the most precise understanding yet of how large coalitions of nerve cells coordinate to give rise to behavior and cognition.”

“What we need to do as neuroscientists is to understand how a lot of neurons spread all over the brain work together,” says neuroscientist Matteo Carandini. Carandini and his colleague Kenneth Harris run a lab at the University College London (UCL) whose team has worked with the prototype Neuropixels probes and helped guide their development. Until recently, Carandini says, it was possible to measure the activity of individual neurons within a specific spot in the brain or to reveal larger, regional patterns of activity—but not to do both at the same time. “As long as you place them appropriately, you can really study how different parts of the brain work together at the neuronal level. This is a game changer,” he says.

Janelia group leader Albert Lee, whose team has also been using Neuropixels prototypes and providing feedback on their development, says the ability to collect data from many different brain regions simultaneously will also reduce the number of experiments needed to glean a big-picture view of what happens in the brain when an animal performs a particular task. A single experiment can now replace a series of experiment each focused on a different brain region, he says.

Neuropixels probes are similar to electrophysiology probes that neuroscientists have used for decades to detect extracellular electrical activity in the brains of living animals—but they incorporate two critical advances. The new probes are about as long as a mouse brain—so they pass through and collect data from many different brain regions at the same time. And recording electrodes are densely packed along their length, making it easier for researchers to pinpoint the cellular sources of brain activity. Finally, each of the new probes incorporates a nearly complete recording system – reducing hardware size, cost and eliminating hundreds of output wires.

John O’Keefe of the Sainsbury Wellcome Centre at University College London and lead principal investigator on the Wellcome and Gatsby Charitable Foundation grants said he was eager for British involvement in the project right from the beginning. “It was clear to me that if these probes worked they would take our ability to relate single cell activity and behavior to a new level,” O’Keefe says. “And they would be particularly useful in cortical areas related to spatial memory such as the hippocampus and entorhinal cortex.”

The Neuropixels project was launched in 2013, with an ambitious goal of dramatically advancing the technology available for detecting electrical activity in the brain. Although some labs did have the ability to record activity from hundreds of neurons at the same time, such experiments were costly and technically difficult, and the electrophysiology probes available to most researchers at the time had 16-64 sensors, limiting the number of cells users could monitor in an experiment.

Harris and his colleagues agreed it was time to move things forward in a big way. “Janelia is a place where people are willing to push the envelope on what you might be able to do,” Harris says. Rather than figuring out how to squeeze a few more sensors on an existing probe, Janelia scientists began talking about designing a new generation of probes that could record from hundreds of neural sites at once—and then manufacturing enough of them to supply the neuroscience community at an affordable cost.

Harris consulted with semiconductor engineers who told him the idea was feasible. But it was clear from the outset that the development costs would be high. Fabricating hundreds of electrodes and placing them on a device slender enough to be inserted into the brain of a living animal was simply beyond the capacity of academic facilities, Harris says. “With the new probes, we’re not really at the bleeding edge of technology, but we are far beyond the fabrication capabilities available to research laboratories,” he explains. The probes that Janelia’s neuroscientists wanted would have to be made by professional semiconductor engineers using state-of-the-art equipment.

The project was likely to look risky to a typical government granting agency, Harris says. “We needed 5 million dollars—to make one thing,” he notes. So he appealed to other sources. Recognizing an opportunity to accelerate the pace of neuroscience research, HHMI, the Allen Institute, the Gatsby Charitable Foundation, and Wellcome agreed to fund the endeavor.

Imec, a state-of-the-art maker of silicon microcircuits, agreed to design and fabricate the devices. The nonprofit research center has expertise and facilities that were needed for the project, but does not usually manufacture products on an industrial scale. “They are great at making and designing things, and they were willing to consider projects for small volume output,” Harris says.

“Imec’s expertise in analog design, deep silicon etch, biocompatible electrode fabrication and proprietary SOI CMOS processes makes us one of the few research and development institutions worldwide that is able to manufacture probes like these,” stated Barundeb Dutta, Chief Scientist at imec. “The way that the probe was designed and fabricated and how it is already transforming neuroscience, points to the relevancy and promise of a new model in which private research foundations with deep expertise, fund the design and fabrication of breakthrough tools, which can then advance fundamental research.”

Harris and colleagues at HHMI, the Allen Institute, and UCL worked with imec to develop the Neuropixels probes, testing prototypes and ensuring the devices were practical for a wide range of experiments. The probe design also integrates components that transform the electrical signals that it detects into digital data ready for computational analysis. Scientists at UCL have developed new data analysis methods to transform that data into meaningful information about the activity of individual cells. 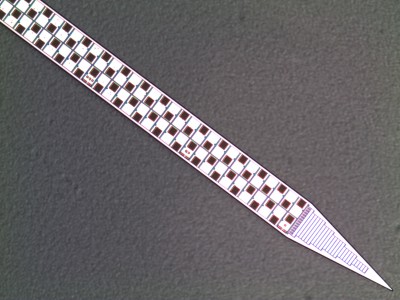 Caption: Neuropixels probes place hundreds of recording electrodes across a large span of a rodent’s brain, so that researchers can collect more meaningful data in a single experiment than other technologies currently allow. 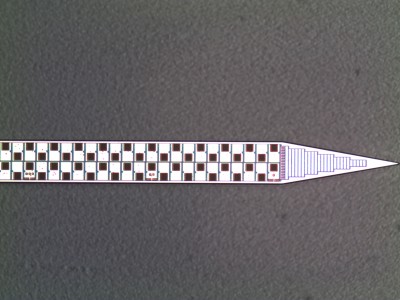 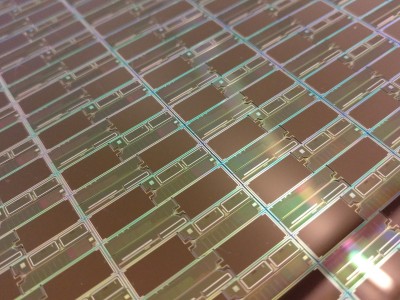