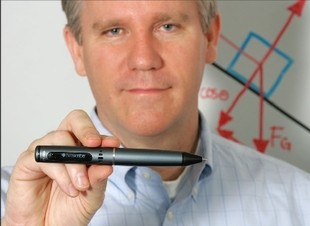 Newswise — Subjects like physics, calculus and biology are challenging for most students, but imagine tackling these topics without being able to see the graphs and figures used to teach them. A new smartpen and paper technology that works with touch and records classroom audio aims to bring these subjects to life for blind students.

"Mainstream approaches to teaching STEM (science, technology, engineering and math) courses all rely strongly on diagrams, graphs, charts and other figures, putting students with visual disabilities at a significant disadvantage," Andy Van Schaack, lecturer in Vanderbilt University's Peabody College of education and human development, said. "Our goal is to enable students and teachers to produce and explore diagrams and figures through touch and sound using a smartpen and paper technology that is low-cost, portable and easy to use."

Van Schaack and colleague Joshua Miele, a researcher at the Smith-Kettlewell Eye Research Institute who is blind, have received a $300,000 grant from the National Science Foundation to apply the new technology, created by technology company Livescribe, to this effort. Van Schaack is Livescribe's senior science adviser.

"My area of expertise is instructional technology. I spend a lot of my time trying to figure out how to use technology to make teaching and learning more effective, efficient and accessible," Van Schaack said. "A new world of possibilities has opened for the rapid creation of portable, low-cost, high-quality accessible graphics enhanced with audio. For example, a visually impaired psychology student could learn neuroanatomy by exploring a diagram of the brain, with each lobe, gyrus and sulcus's name spoken as the smartpen touches it."

The Livescribe smartpen recognizes handwritten marks through a camera inside its tip that focuses on a minute pattern of dots printed on paper. It captures over 100 hours of audio through a built-in microphone and plays audio back through a built-in speaker or 3D recording headset. Files are uploaded from the pen to a computer using a USB connection. The technology will be much more affordable and portable than previous products used for this purpose " students can just put it in their backpacks with the rest of their books and notebooks.

Van Schaack and Miele will be using a prototype of the Livescribe smartpen and a Sewell Raised Line Drawing Kit, a Mylar-like film that is deformed when a student writes on it with a pen, creating raised drawings. Students will be able to touch a hand-drawn figure with their smartpen to hear audio explanations of its features.

As for other uses of the smartpen, Van Schaack believes the possibilities are endless.

"It really is a new computer platform " it includes most of the technology found in a typical laptop, but gets its information from handwriting rather than from a keyboard and mouse," Van Schaack said. "One of the most immediate uses of it that I see will be for college students. It will allow them to spend more time listening in class while taking more of an outline form of notes. Later, when they are reviewing their handwritten notes, they can tap within them to hear what the professor was saying when they wrote a particular note, giving them the opportunity to annotate them for accuracy and additional detail."

The smartpen is expected to hit stores during the first quarter of 2008 at a cost of less than $200. Livescribe interactive notebooks will run about the same price as a good quality notebook from a college bookstore.

For more information about the smartpen, visit http://www.livescribe.com.