Thousands are bitten by rattlers and other venomous snakes each year, and a new treatment may serve as a “bridge” to buy time until medical care is available. 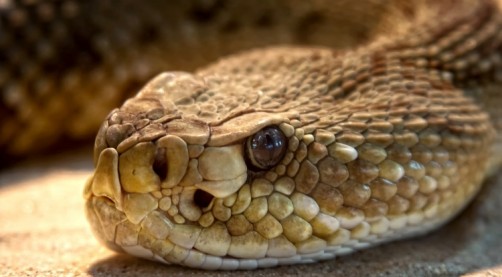 Although snakebites are fatal for only about five or six people per year in the U.S., most of those deaths are attributed to rattlesnakes.

Newswise — Time is of the essence for treating venomous snakebites, and a product being developed by researchers at the University of Arizona College of Medicine – Tucson may extend that window for treatment.

The researchers hope this new treatment will delay or prevent some of the most serious consequences of bites from rattlesnakes and other venomous snakes.

The product, which still must undergo lengthy lab and clinical trials, is intended to act as a "bridge" that buys time for a person who faces the potentially life-threatening effects of a snakebite, which may occur far from medical care. The treatment might be stocked in ambulances, or included in first-aid kits for campers and hikers, said Dr. Vance G. Nielsen, professor and vice chair for research in the Department of Anesthesiology.

Nielsen led the research, collaborating with toxicologist Dr. Leslie Boyer, founding director of the UA's VIPER Institute and associate professor of pathology, who develops antivenom treatments for snakebite and scorpion stings. Boyer also is a member of the BIO5 Institute.

The team has been working with Tech Launch Arizona, the UA office that commercializes inventions stemming from University research, on protecting the intellectual property and strategizing pathways to bring the treatment to market so it can get into the hands of medical professionals.

As many as 8,000 people are bitten by venomous snakes in the United States each year, according to the U.S. Centers for Disease Control and Prevention. The bites are fatal for only about five or six of those people, and most of those deaths are attributed to rattlesnakes.

The new therapy is intended to prevent or delay a dangerous result of rattlesnake bite: destruction of fibrinogen, an essential protein that enables blood to clot. Loss of fibrinogen increases the risk of bleeding within the body.

"People may not die from that, but they may have bleeding into their brain or intestine, and they may require transfusions. They may have a lot of serious consequences because of that bleeding," Nielsen said.

The product consists of a combination of carbon monoxide and iron, which — if given soon enough after the bite — could block the venom’s effects, preserving fibrinogen and allowing blood to clot. That, in turn, could delay or prevent the serious bleeding from snakebite.

The treatment would be given to people bitten by rattlesnakes and other "pit vipers," a family of snakes found throughout North and South America. Some toxins in pit viper venom destroy fibrinogen, while other toxins work on different paths of the coagulation (clotting) pathway, Nielsen said.

"I became interested in this line of investigation as a natural offshoot of my work understanding the biology of iron and carbon monoxide modifications of fibrinogen," said Nielsen, an anesthesiologist. "The concept that changing fibrinogen so that it may resist venom-mediated destruction was a thought that just came to me."

Nielsen began developing the treatment a year ago and said it is "purely at the discovery and development phase." He is optimistic about the product’s potential, as is Boyer.

"We don’t want people to think this is going to be available to them tomorrow," Boyer said. "It will take awhile to put it through the tests for safety and efficacy required to prove its value. For now, I’m delighted to be part of this innovative approach that may lead to a better outcome for patients. Dr. Nielsen brings an entirely new perspective to the field of snakebite treatment."