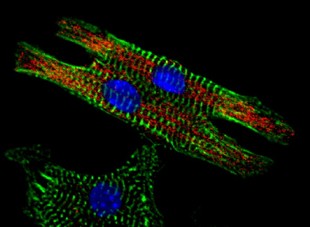 TAGGING A NEW SOURCE OF HEART STEM CELLS: Pu and Zhou tagged the Wt-1 expressing epicardial cells with a fluorescent red protein, then allowed the cells to differentiate. The image shows a descendent cardiomyocyte (green) that carries the same red marker, and another cell that arose from different origins. (The blue stain indicates cell nuclei).

Newswise — Researchers at Children's Hospital Boston are continuing to document the heart's earliest origins. Now, they have pinpointed a new, previously unrecognized group of stem cells that give rise to cardiomyocytes, or heart muscle cells. These stem cells, located in the surface of the heart, or epicardium, advance the hope of being able to regenerate injured heart tissue.

This finding, published online by the journal Nature on June 22, comes on the heels of parallel cardiac stem cell discoveries in 2006, at both Children's and Massachusetts General Hospital. Then, the Children's team found that a specific stem cell or progenitor, marked by expression of a gene called Nkx2-5, forms many components of the heart: heart muscle cells, vascular smooth muscle cells, and the endothelial cells lining blood vessels in the heart's left-sided chambers. The team at MGH found a related progenitor, marked by expression of the Isl1 gene, that produces these same cell-types in the right-sided heart chambers.

Now, researchers at Children's have shown that heart muscle cells can also be derived from a third type of cardiac progenitor, located within the epicardium and identifiable through its expression of a gene called Wt1.

"There's a lot of interest in finding places to obtain new cardiomyocytes, because in heart failure, you lose cardiomyocytes, so the only way to reverse heart failure is to make more of these cells," said William Pu, MD, a pediatric cardiologist at Children's who was the study's senior investigator.

Although epicardial cells are known to give rise to smooth muscle and endothelial cells during coronary vessel formation, nobody previously thought that epicardial cells might turn into cardiomyocytes. "I couldn't believe it at first, myself," said Bin Zhou, MD, a research fellow in Pu's laboratory and the study's first author.

The results were independently corroborated by researchers from the University of California, San Diego. Using a different genetic marker, Tbx18, the UCSD team also showed that cardiomyocytes can be derived from the epicardium, and their study will be published in the same issue of Nature.

Pu and Zhou showed that a specific population of cells in the epicardium, marked by Wt1 expression, not only differentiated into cardiomyocytes, but also smooth muscle cells, endothelial cells and fibroblasts (found in connective tissue).

"If you're going to regenerate a tissue, you need to regenerate the whole tissue, not just the cardiomyocytes," said Pu. "This progenitor population contains all the potential to regenerate multiple tissue types within the heart."

In recent years, the scientific literature has described many progenitors for cardiomyocytes, Pu added, but the markers used frequently did not play a direct role in heart development. For example, Sca-1 and c-Kit are markers that most stem cells express throughout the body, with no cardiac or developmental specificity.

"I think our best chance of getting a cell to do what we want is to modify what it was designed to do," Pu elaborated. "Some of these other progenitors were isolated in the adult heart, but we don't know what they do in the normal heart, and what they're related to in the embryo. However, we clearly know what progenitors expressing Wt1, Nkx2-5, and Isl1 do in the fetus: they can make fibroblasts, blood vessels, and cardiomyocytes. Therefore we think we have a good shot, in the adult heart, of recapitulating these events."

Pu considers his and Zhou's discovery to be a fortunate accident. They were trying, instead, to study a different gene, GATA4, by deleting it in the epicardium. "The tool we created for that experiment irreversibly marks the cells involved, so you can see where their descendants are headed in normal development," Pu explained. "Unexpectedly, we saw that these epicardial cells were becoming cardiomyocytes—it was a lucky observation."

Using an enzyme called Cre recombinase, Pu and Zhou labeled epicardial cells in live mouse embryos with red fluorescent protein (RFP). Each time the Wt1 gene in these cells was activated, RFP lit up. Since the marker is inherited by descendants of the Wt1-expressing cell, the researchers could identify these descendants by looking for RFP.

"If the marker shows up in a cardiomyocyte, then I know that cardiomyocyte came from the Cre-expressing progenitor," said Pu.

At the moment, scientists are still trying to figure out whether and how the Wt1-expressing progenitors relate to the progenitors reported in 2006.

"What we think is that very early on, our particular progenitor expresses Nkx2-5 and Isl1, but quickly loses expression of both and starts expressing Wt1," said Pu. "Think of a lineage hierarchy with Nkx2-5 and Isl1 at the top, and Wt1 as a branch. These two lineages separate pretty early, before the heart is present in the embryo. However, the Wt1-expressing progenitor may retain some of the developmental capabilities of the progenitors expressing Nkx2-5 and Isl1."

Pu and Zhou now want to know whether the epicardium in an adult mouse could be induced to make cardiomyocytes. "If so, obviously this would be much more translatable to human studies," Pu said. Other ongoing questions are whether this newly-discovered progenitor is truly multipotent (able to turn into all other cell types), how multipotency is controlled, and whether this can be used therapeutically to benefit adults with heart failure.

The fact that the Wt1-expressing progenitors can also differentiate into fibroblasts in the developing heart suggests that they can contribute to scar formation in the adult heart after injury, Pu added. "But if we can turn the progenitors away from making scars, and instead turn them towards making cardiomyocytes, that would be pretty exciting."

Put another way, Pu and Zhou would love to learn what controls a progenitor's choice—to become a fibroblast, a smooth muscle cell, or a cardiomyocyte—and develop ways of "biasing progenitors to make the choice or choices we want," says Pu. "We still don't know how we can manipulate these progenitors, and there's no way to predict which ones will be useful. But I think having more choices is good, because then hopefully one of them will work."

The study was funded by the National Heart, Lung and Blood Institute of the National Institutes of Health, USA, and by a charitable donation from E.P. Marram and K.K. Carpenter.

Children's Hospital Boston is home to the world's largest research enterprise based at a pediatric medical center, where its discoveries have benefited both children and adults since 1869. More than 500 scientists, including eight members of the National Academy of Sciences, 11 members of the Institute of Medicine and 12 members of the Howard Hughes Medical Institute comprise Children's research community. Founded as a 20-bed hospital for children, Children's Hospital Boston today is a 397-bed comprehensive center for pediatric and adolescent health care grounded in the values of excellence in patient care and sensitivity to the complex needs and diversity of children and families. Children's also is the primary pediatric teaching affiliate of Harvard Medical School.