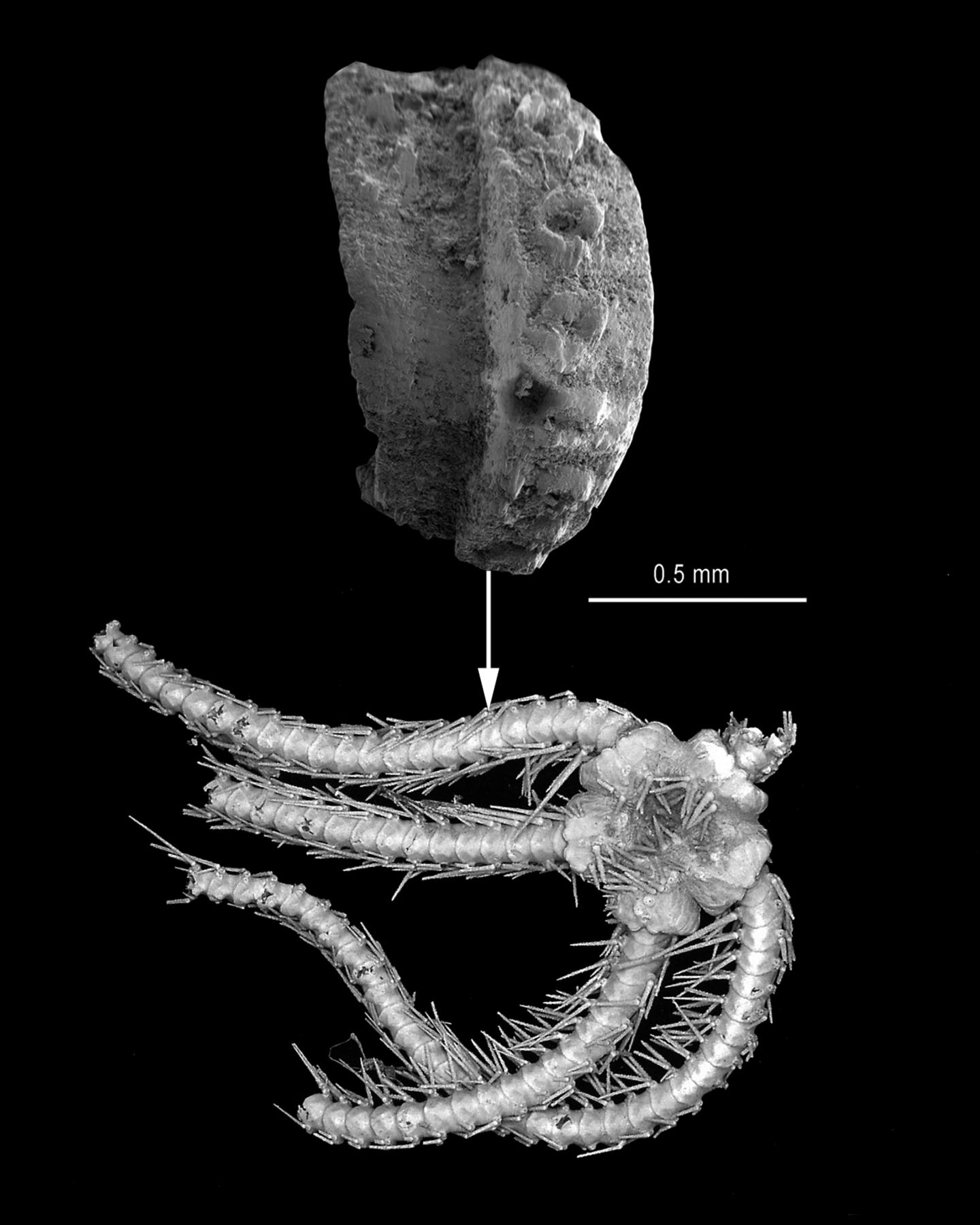 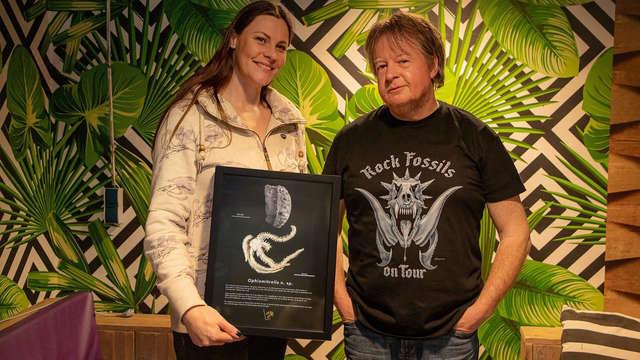 Image shows name giver of the new species, Floor Jansen, together with Dr. John Jagt, co-author of the paper.

Newswise — Palaeontologists from the Natural History Museums in Luxembourg and Maastricht have discovered a previously unknown species of brittle star that lived in the shallow, warm sea which covered parts of the present-day Netherlands at the end of the Dinosaur Era. The starfish-like creature was unearthed more than 20 years ago but has only now been identified as new to science. The name of the new fossil pays tribute to Dutch metal vocalist Floor Jansen, in recognition of the mutual inspiration between science and music.

Like so many exciting discoveries, the new fossil species had long passed unnoticed. It was a stroke of luck when a fossil collector noted the fossil of a tiny, starfish-like creature during one of his excursions to the world-famous ENCI HeidelbergCement company quarry near the Dutch city of Maastricht. The specimen was much smaller than other brittle-star fossils occasionally found at the same locality and thus much less likely to be collected. Dr John Jagt, palaeontologist at the Natural History Museum in Maastricht, soon identified the specimen as a long-spined brittle-star. "I reckoned the specimen belonged to a group of brittle-stars that is particularly rare in the fossil record but its true identity remained puzzling with the information at hand", Jagt explains. "When examining microfossils extracted from the same rocks that yielded the brittle-star fossil, I noticed microscopic skeletal fragments that seemed to belong to the same species", he continues. 20 years later, Jagt was proved right when Dr Ben Thuy and Dr Lea Numberger, palaeontologists at the Natural History Museum in Luxembourg, examined the brittle-star fossils from Maastricht from a different angle, taking into account the latest progress of knowledge in the field. "We were incredibly lucky to have both microscopic skeletal remains and a complete fossil skeleton of the same brittle-star species," Thuy highlights. "This provided an exceptionally complete picture of the species" Numberger continues. That the species turned out to be new to science was exciting in itself but there was more: "The new brittle star must have lived in a shallow, warm sea while its living relatives are found in the deep sea. This shows that there was a major shift in distribution over the past million years," Thuy explains. The experts were even able to gain insights into the mode of life of the new species. "Because the fossil individual was found wrapped around the stalk of a sea lily, we assume that the species lived with and probably even clung to these flower-like echinoderms," Jagt remarks. Interactions or associations between species are only rarely preserved in the fossil record. When scientists discover a new species, they have the privilege to name it. Often, species names refer to a locality or a specific character. Some also honour other experts in the field. In the case of the Maastricht brittle star, Jagt, Thuy and Numberger decided to combine their passions for fossils and heavy metal music and paid tribute to Dutch metal vocalist Floor Jansen and her band Nightwish. "Rock music and fossils are a perfect match. They have been inspiring each other for a long time" Numberger explains. The new fossil, Ophiomitrella floorae, is in excellent company, as can be experienced in the travelling exhibition "Rock Fossils on Tour", celebrating fossils named after rock bands and musicians like Kalloprion kilmisteri, an ancient worm honouring Motörhead's Ian "Lemmy" Kilmister, and currently on display (until January 3, 2021) at the Natural History Museum in Maastricht.

PeerJ is an Open Access publisher of seven peer-reviewed journals covering biology, environmental sciences, computer sciences, and chemistry. With an emphasis on high-quality and efficient peer review, PeerJ's mission is to help the world efficiently publish its knowledge. All works published by PeerJ are Open Access and published using a Creative Commons license (CC-BY 4.0). PeerJ is based in San Diego, CA and the UK and can be accessed at peerj.com

Across its journals, PeerJ has an Editorial Board of over 2,000 respected academics, including 5 Nobel Laureates. PeerJ was the recipient of the 2013 ALPSP Award for Publishing Innovation. PeerJ Media Resources (including logos) can be found at: peerj.com/about/press

Caption: Image shows name giver of the new species, Floor Jansen, together with Dr. John Jagt, co-author of the paper.