New Studies to Uncover the Costs of Florida’s Red Tide

Newswise — The Gulf of Mexico Coastal Ocean Observing System (GCOOS) and NOAA’s National Centers for Coastal Ocean Science (NCCOS) are funding two new studies designed to uncover the full costs of harmful algal blooms (HABs) across numerous sectors — from tourism and seafood to industries where impacts are less visible, such as healthcare and construction.

Across the U.S., the seafood, restaurant and tourism industries are estimated to suffer millions of dollars in economic losses from harmful algal blooms — losses played out in communities from California to New England, and Ohio to Florida. But the true economic losses caused by toxic algae blooms are unknown.

“We know that in Florida and across the U.S., HAB events are becoming more frequent, more toxic, longer lasting and more widespread,” said Dr. Barbara Kirkpatrick, Executive Director of GCOOS. “While we can’t eliminate blooms, having a better understanding of their mechanics as well as their negative consequences can help resource managers lessen their impacts on communities. That’s why these new studies are so important.”

As a state that relies heavily on these sectors, Florida is especiallyvulnerable to the socioeconomic damages of toxic blooms. This was apparent during the prolonged red tide that began in 2017 and lasted through early 2019, causing the state’s governor to declare a state of emergency.

There are thousands of species of algae — phytoplankton — in fresh and marine waters. They are essential to life, forming the basis of the food web and providing an important source of oxygen. While most species are harmless to humans and animals, some, like the Karenia brevis that causes Florida’s red tide, are toxic. When these species multiply they can wreak havoc on human and marine animal health, contaminate seafood and devastate local economies.

The studies will evaluate the sociological and economic impacts of Florida’s 2017-2019 red tide event and develop a framework to inform future assessments of other HAB events with the goal of mitigating economic impacts on communities.

Project Summary: This two-year project will examine the economic impacts of K. brevis events across 80 different sectors, based on varied bloom occurrence and intensity. Understanding the true costs of HABs is key to developing effective response and adaptation strategies that meet the needs of impacted communities in Florida and around the country.

“We know that harmful algal blooms drive people away from the waterfront,” Alvarez said. “With this project, we will identify how Florida red tide has been impacting the state’s economy in terms of reduced sales from different economic sectors. But we are also testing the idea that information from social media could be more of a driver in these impacts than so-called objective measures, like water sampling data.”

Adds O’Leary: "When everyday people make the small-scale and large-scale decisions that ultimately impact Florida's economy, they're not necessarily checking biophysical monitoring or formal economic metrics. They're more likely making those decisions by checking with friends and colleagues on social media. By keeping one eye on social media and the other on economic metrics, we're able to get a better sense of how these interact to make HABs worse, or to lessen their impact."

About the University of Central Florida
The University of Central Florida is a public research university located in Orlando, Florida. Founded in 1963 to fuel the region’s talent pipeline and support the growing U.S. space program, UCF has been making an impact on the state, the nation — and outer space — ever since. UCF is an academic, partnership and research leader in numerous fields, such as optics and lasers, modeling and simulation, engineering and computer science, business, public administration, education, hospitality management, healthcare and video game design. The university is also a top supplier of graduates to the aerospace and defense industries.

About the University of South Florida System
The University of South Florida System is a high-impact global research system dedicated to student success. The USF System includes three institutions: USF, USF St. Petersburg and USF Sarasota-Manatee. The institutions are separately accredited by the Commission on Colleges of the Southern Association of Colleges and Schools. All institutions have distinct missions and their own detailed strategic plans. Serving over 50,000 students, the USF System has an annual budget of $1.8 billion and an annual economic impact of $4.4 billion. USF is a member of the American Athletic Conference.

Project Summary: This two-year project will comprehensively quantify and qualify the short- and long-term socioeconomic impacts of the 2017-2019 Karenia brevis event in Florida and develop a transferable framework to help inform national-scale efforts focused on quantifying as well as measuring community vulnerability and resiliency.

“Informed decision-making associated with HAB mitigation and coastal resource management requires the comprehensive assessment of short- and long-term socioeconomic impacts,” said Court, lead researcher and an economist with the University of Florida Institute of Food and Agricultural Sciences. “The outcomes of this project are not only important for the state of Florida but will inform ongoing discussions related to mitigation and prevention of HABs and their associated impacts amongst academics, federal, state and local policymakers, as well as industry stakeholders, recreational users and the general public.”

About UF/IFAS
The mission of the University of Florida Institute of Food and Agricultural Sciences (UF/IFAS) is to develop knowledge relevant to agricultural, human and natural resources and to make that knowledge available to sustain and enhance the quality of human life. With more than a dozen research facilities, 67 county Extension offices, and award-winning students and faculty in the UF College of Agricultural and Life Sciences, UF/IFAS brings science-based solutions to the state’s agricultural and natural resources industries, and all Florida residents. 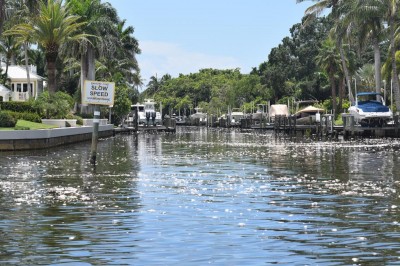 Caption: While conducting regular dolphin surveys in Sarasota Bay, Florida, during the 2017-2019 bloom, researchers with Chicago Zoological Society’s Sarasota Dolphin Research Program regularly came across pockets of dead fish in canals and other areas. Their studies documented a nearly 90 percent decline in prey fish available to this long-term resident dolphin community during the bloom. Their ongoing research also provides an indicator for how large the potential impact was on the human fishing community.