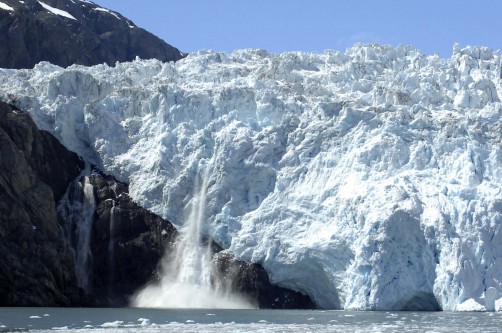 Holgate Glacier, shown here in June 2009, terminates on the coast and is a popular kayaking destination, especially in summer when the ice is calving. Local residents had recently observed land exposed at its terminus, but the new analysis finds that the glacier has been advancing over the past 5 years. 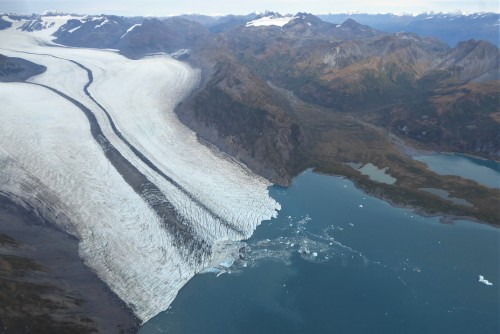 Almost half of Kenai Fjords National Park is covered by glacial ice. Glaciers play an important role in sculpting the park’s landscape. Bear Glacier, shown here in September 2019, has retreated more than 5 kilometers (about 3 miles) from 1984 to 2021, according to the new study. The lagoon at the glacier’s base is growing as the glacier retreats. 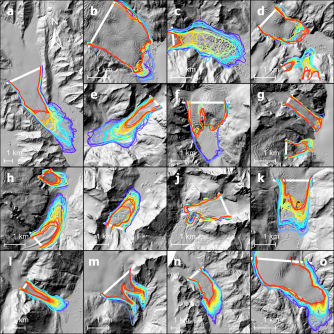 These colored outlines show the edges mapped for each of the 19 glaciers that were studied in Kenai Fjords National Park. Color scale ranges from purple for 1984, the earliest year in the satellite images, to red for 2021, the most recent year. A few of the glaciers are Bear Glacier (a), Aialik Glacier (b), and Pedersen Glacier (c), all of which have retreated. Holgate Glacier (d), on the other hand, has advanced in many places. Thirteen of the 19 glaciers showed substantial retreat. 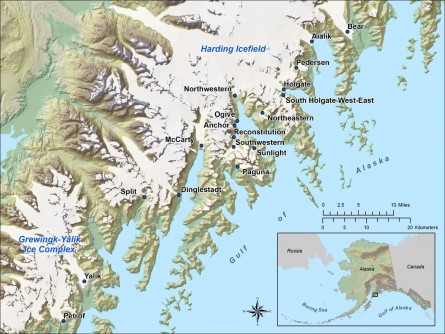 Kenai Fjords National Park is on Alaska’s Kenai Peninsula and is dominated by two major icefields. The 19 glaciers included in the study are shown as blue dots. While Alaska glaciers are just a small fraction of the planet’s glacial ice, they are losing ice faster than any other glacierized region outside of Antarctica and Greenland.

Embargoed by the Journal of Glaciology

Newswise — As glaciers worldwide retreat due to climate change, managers of national parks need to know what’s on the horizon to prepare for the future. A new study from the University of Washington and the National Park Service measures 38 years of change for glaciers in Kenai Fjords National Park, a stunning jewel about two hours south of Anchorage.

The study, published Aug. 5 in The Journal of Glaciology, finds that 13 of the 19 glaciers show substantial retreat, four are relatively stable, and two have advanced. It also finds trends in which glacier types are disappearing fastest. The nearly 670,000-acre park hosts various glaciers: some terminate in the ocean, others in lakes or on land.

“These glaciers are a big draw for tourism in the park — they’re one of the main things that people come to see,” said lead author Taryn Black, a UW doctoral student in Earth and space sciences. “Park managers had some information from satellite images, aerial photos, and repeat photography but they wanted a more complete understanding of changes over time.”

“In Alaska, much glacier retreat is being driven by climate change,” said Black. “These glaciers are at really low elevation. It’s possibly causing them to get more rain in the winter rather than snow in addition to warming temperatures, which is consistent with other climate studies in this region.”

One surprising finding was that Holgate Glacier, which as a tidewater glacier terminates at the ocean, has advanced in recent years. Local boat operators had reported seeing newly exposed land near the glacier’s edge in 2020. But the new analysis shows that the overall glacier has been advancing for about 5 years, and appears to go through regular cycles of advance and retreat. The edges of most of the other tidewater glaciers were relatively stable over the study period.

The six land-terminating glaciers all showed intermediate response, with most retreating, especially in summer months, but at a slower rate than the lake-terminating glaciers. The only other glacier that advanced during the study period was land-terminating Paguna Glacier, which is covered in rock debris from a landslide caused by the 1964 Alaska earthquake. This debris insulates the glacier surface from melting.

To make the calculations, Black used 38 years of images captured by satellites in fall and spring to trace outlines for each of the 19 glaciers — a total of about 600 outlines. She visually inspected each image to map the position of the glacier’s edge. Black used a similar approach in recent research to calculate the rate of retreat of marine-terminating glaciers in west Greenland.

The new data for Alaska provide a baseline to study how climate change — including warmer air temperatures, as well as changes in both the types and amount of precipitation — will continue to affect these glaciers. All the glaciers in the study are considered maritime glaciers because they are subject to the warm, wet maritime climate.

The study has immediate application for park managers. These numbers help to quantify the changes that have been occurring and will continue for the glaciers and their immediate environments.

“We can’t manage our lands well if we don’t understand the habitats and processes occurring on them,” said co-author Deborah Kurtz at the U.S. National Park Service in Seward, Alaska.

As the park’s Physical Science Program Manager, Kurtz is also interested in the changes to the surrounding river, lake and landscape ecosystems, and how to communicate those changes to the public.

“Interpretation and education are also an important part of the National Park Service mission,” Kurtz said. “These data will allow us to provide scientists and visitors with more details of the changes occurring at each specific glacier, helping everyone to better understand and appreciate the rate of landscape change we are experiencing in this region.”

This study was done as part of an internship originally intended to take place at Kenai Fjords National Park. Black instead did the research remotely from Seattle and visited local glaciers at Mount Rainier. Part of this research was funded by the National Park Service’s Future Park Leaders program, a partnership between the Ecological Society of America and the U.S. National Park Service.

The Journal of Glaciology