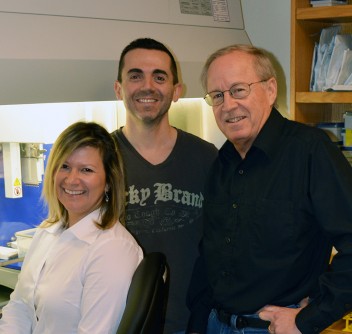 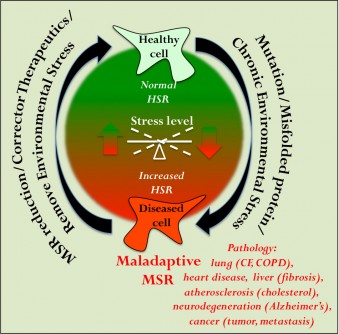 Image courtesy of the Balch lab, The Scripps Research Institute.

Newswise — LA JOLLA, CA—November 18, 2014—“Protein misfolding” diseases such as cystic fibrosis and Alzheimer’s may be seriously exacerbated by the body’s own response against that misfolding, according to a new study led by scientists at The Scripps Research Institute (TSRI).

The researchers examined patient cells and animal models of several diseases that feature chronic protein misfolding and found that in each case, a cellular defense system against protein misfolding, called the “heat shock response,” was overactive. Reducing its activity lessened the signs of disease and enhanced the effects of existing therapeutics.

“This has important implications for the treatment of many human diseases,” said TSRI Professor William E. Balch, PhD, who was senior investigator for the study.The research, reported in November 18 by the journal PLoS Biology, focused initially on cystic fibrosis, a genetic disease that causes recurrent lung infections and cuts life expectancy in half.

Nearly all cystic fibrosis patients have a particular mutation (a deletion of the amino acid phenylalanine at position 508, known as F508-del) in both copies of the gene that codes for CFTR, an ion-channel protein that normally helps regulate cellular chloride levels in the lungs and other tissues. Mutant CFTR protein is structurally unstable, tends to fold abnormally and thus usually ends up trapped by cellular “chaperone molecules” (folding helpers) in the interior of the cell, where it is degraded. Only a small percentage of the mutant CFTR protein reaches the cell membrane and functions as ion channels.

As Balch’s and other laboratories have shown in recent years, the chaperones that trap mutant CFTR are part of the heat shock response, a powerful system that evolved to defend cells against protein misfolding caused by excess heat, oxidation and other stress factors.

“The conventional view in the field of misfolding diseases for many years has been that boosting the heat shock response and chaperone levels to improve protein folding should be therapeutic in many protein-misfolding diseases,” said Daniela M. Roth, PhD, a research associate who led the study in the Balch laboratory. “That may not be the case when misfolded proteins are produced chronically, and the heat shock response stays elevated.”

In the new study, the team first confirmed that heat shocking bronchial epithelial cells—an important affected cell type in cystic fibrosis—leads to the near-total trapping and degradation of mutant CFTR. The scientists then reproduced the same increased-trapping effect at normal temperature by turning up the heat shock response artificially—via the overproduction of an active form of HSF1, a transcription factor protein that serves as the main “on switch” for the response.

The clear suggestion from all this was that dialing down the heat shock response could be beneficial, because it would reduce the overactivity of the chaperones that trap mutant CFTR. The team soon found that was the case: Inhibiting HSF1 activity reduced the chaperone trapping of mutant CFTR, allowing more of the protein to reach the cell membrane and thus better regulate chloride levels.

In further experiments, collaborator Jeffrey M. Beekman and his graduate student Johanna F. Dekkers at University Medical Centre, Utrecht, the Netherlands, used a cystic fibrosis model consisting of clumps of tissue—“organoids”—derived from cystic fibrosis patients. In these organoids, the scientists inhibited HSF1 with a compound called triptolide and at the same time applied VX-809, a promising cystic fibrosis drug candidate. The two drugs together showed a powerful synergistic effect, producing a greater reduction in disease signs, compared to VX-809 treatment on its own.

“It appears that having more heat shock chaperone activity exacerbates the signs of cystic fibrosis, whereas reducing that activity may be a way to treat the disease,” Roth said.

The team also found a hint that a chronically overactive heat shock response may end up causing a general disruption of the general folding function in cells. In cells containing mutant CFTR, but not in those with normal CFTR, a luminescent enzyme that marks the capacity of cells to enforce proper protein folding indicated a major reduction in global folding capacity.

“This broad impairment presumably reduces the ability of cells to function correctly in many folding reactions, which would compound the disease pathology,” said Balch.

The finding that misfolded CFTR provokes an abnormal heat shock response, which seems to do more harm than good in cells, suggested to Balch and his colleagues that the same sort of thing might be happening in other protein-misfolding conditions.

The team confirmed that suspicion in cell models of the genetic disorders alpha-1-antitrypsin deficiency and Niemann-Pick disease. In both cases, cells that produced the mutant misfolded proteins showed signs of an overactive heat shock response—and inhibition of HSF1 improved markers of the mutant proteins’ functions.

Collaborator Richard I. Morimoto and his postdoctoral researcher Ning Wang at Northwestern University investigated a commonly used animal model of protein misfolding, in which a roundworm (C. elegans) overproduces the Alzheimer’s-associated amyloid beta 42 peptide in muscle cells. The worms’ muscle cells form aggregates of the peptide, and most of the affected worms develop paralysis. Again, HSF1 turned out to be overactive in these aggregate-filled muscle cells, and inhibiting HSF1 activity reduced the proportion of worms with paralysis, suggesting a strong evolutionary conservation of the maladaptive response.

To further establish the relevance to Alzheimer’s, collaborator Eliezer Masliah at the University of California, San Diego, looked at standard gene-mutant mouse models of the disease and found a similar HSF1 overactivation in brain tissue, compared to none in ordinary, wild-type mice.

In addition to Balch, Roth, Beekman, Dekkers, Morimoto, Wang and Masliah, co-authors of the paper, “Modulation of the Maladaptive Stress Response to Manage Diseases of Protein Folding,” were Darren M. Hutt, Jiansong Tong, Marion Bouchecareilh and Theo Seeley from TSRI; and Dan Garza and Lawrence Drew from Proteostasis Therapeutics, Inc.

This work was supported by the Cystic Fibrosis Foundation Therapeutics and by the National Institutes of Health (GM33301, GM42336, DK785483, AG031097 to Balch; AG031097, AG5131 and AG18440 to Masliah; M38109, GM81192, AG026647 to Morimoto); and the WKZ Research Fund and NCFS HIT-CF program to Beekman. Wang is an Alzheimer's Disease Foundation Fellow of the American Health Assistance Foundation. Roth is supported by Australia’s National Health and Medical Research Council CJ Martin fellowship, and Hutt was supported by fellowships from the Canadian Cystic Fibrosis Foundation and the Canadian Institutes for Health Research. 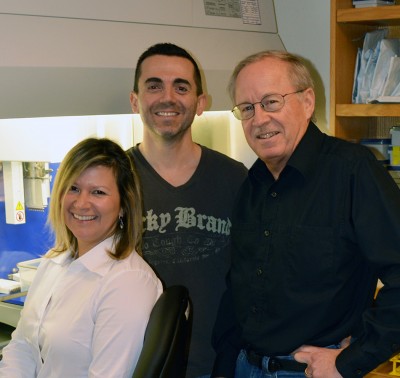 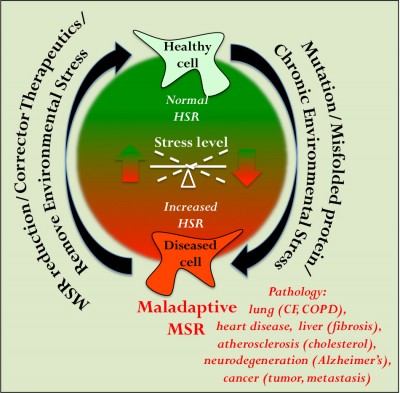