Images of Drug Traffickers May Be Stereotyped, Study Finds 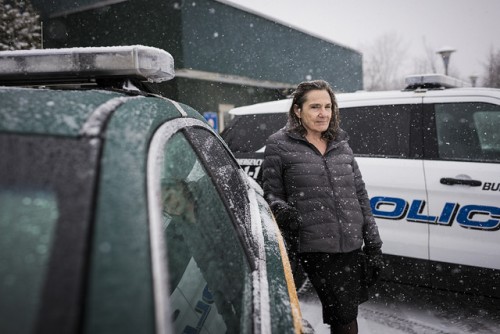 Stephanie Seguino, a professor of Economics at the University of Vermont. Researchers have conducted new analysis and confirmed their 2017 findings: that Black and Hispanic drivers in Vermont were more likely to be stopped and searched than White drivers, though they are less likely to be caught with contraband.

Newswise — Many members of Vermont's law enforcement community welcomed the constructive feedback provided by a 2017 study showing that Black and Hispanic drivers in Vermont were more likely than White drivers to be stopped and searched by state and local police and less likely to be found with contraband.

But questions were also raised by some about the study's methodology and the reliability of its data.

In response, the authors conducted a new analysis, “A Deeper Dive into Racial Disparities in Policing in Vermont,” just released, that uses more sophisticated statistical analysis to answer critiques about methodology and addresses data concerns.

The new study confirms the earlier findings, said Stephanie Seguino, a professor of Economics at the University of Vermont and the lead author of both studies.

It also contains analysis of new contraband data from the Vermont State Police suggesting that racial stereotypes about potential drug traffickers, at least as identified in traffic policing in the state, are inaccurate.

“The goal of this work,” said Seguino, “is to provide a service both to law enforcement and the community on ways to use data to answer questions about the role of race in policing. Given its importance, we wanted to make sure our 2017 findings held, even with more sophisticated analytical techniques. The new study confirms the earlier conclusions.” Nancy Brooks, a visiting associate professor in the Department of City and Regional Planning at Cornell, was co-author of both studies.

Context did not affect results

A chief criticism of the earlier study was that it did not take into account the context of the traffic stops, Seguino said.

“There was a legitimate concern that the stops and searches could have been prompted by other factors – age, time of day, gender, for example – rather than the race of the driver,” she said. “That was something we wanted to investigate.”

Blacks were 2.7 to 3.9 times more likely to be stopped (depending on how many of the additional factors were used in the analysis) compared with 3.9 in the earlier study.

Hispanics were 2.5 to 3 times more likely to be stopped compared with 2.9 times in the earlier study.

The earlier study also found that Black and Hispanic drivers, though more likely to be stopped and searched, were less likely to be caught with contraband.

After controlling for the other factors, the new analysis came to a similar conclusion: Blacks and Hispanics who were stopped and searched were about half as likely to be found with contraband compared to White drivers.

“Adding controls for a variety of contextual factors had little effect not only on racial disparities in the probability of being searched but also of contraband being found during a search,” Seguino said.

The earlier study’s findings prompted the researchers to ask an additional question in the new study: How did the contraband that was found compare between Black and Brown drivers and their White counterparts?

Publicly available information on traffic stops and searches indicates only that contraband was found without specifying its type. At the researchers’ request, the Vermont State Police provided this additional data for traffic stop searches in 2016.

Marijuana was the contraband mostly commonly found, according to the new analysis – making up 71.5 percent of the total.

Heroin, cocaine and opioids combined were found in 10 percent of all searches yielding contraband, but their racial distribution in traffic stops and searches was revealing.

During 2016, hard drugs were found in 39 searches of White drivers but in no searches of Black and Hispanic drivers.

“With samples sizes so small,” (White drivers were stopped and searched by state police a total of 398 times, Blacks and Hispanics a total of 38 times) “we can’t make statistical inferences about this data,” Seguino said.  “But the data are at the very least illustrative, suggesting that the stereotype that searches of drivers of color are more likely to result in contraband of heroin, cocaine, and opioids than found on White drivers is inaccurate, at least for 2016 for Vermont State Police. More data would be helpful to see if this holds true for other agencies and over time.”

The new study also addressed concerns that the 2017 paper’s conclusions may be unreliable because they were based on flawed and inconsistent data provided by the state police and municipal police departments.

“Every data set in every study has flaws,” said Nancy Brooks, co-author and Visiting Associate Professor at Cornell University. “With that said, we did not find any evidence of serious miscoding or overt efforts to manipulate the data in the dataset law enforcement agencies provided.”

The earlier study – which brought to light some inconsistencies in data gathering and coding – has had a positive impact on police departments statewide, spurring them to bring consistency to the collection and coding processes and to implement training on how to gather and record data accurately.

“In sum,” Seguino said, “the use of more rigorous statistical techniques does not in any meaningful way change the nature of our 2017 study. They simply reinforce the racial differences we reported earlier.”