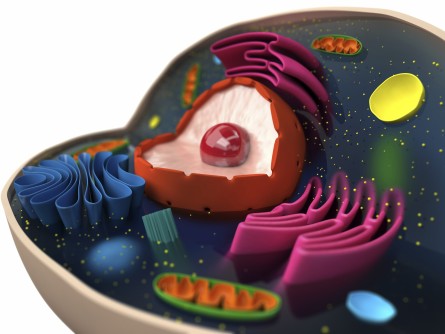 New City of Hope study finds that a cancer-prone mutation of the gene RECQ4 causes its corresponding enzyme, RECQ4, to accumulate in the mitochondria (the green and orange structures in above illustration of a cell's components.) This can cause mitochondrial dysfunction, possibly explaining cancer's "Warburg effect."

Newswise — Cancer cells may be known for their uncontrollable growth and spread, but they also differ from normal tissue in another manner: how they produce energy.

In healthy cells, energy is derived primarily from aerobic respiration, an oxygen-requiring process that extracts the maximum possible energy from glucose, or blood sugar. The amount of energy is measured by the number of units produced of adenosine triphosphate (ATP).

Energy may also be derived from lactic acid fermentation, which does not require oxygen but is also much less efficient, producing only two ATPs per glucose molecule versus 30 or more ATPs per glucose molecule in aerobic respiration. However, most cancer cells use lactic acid fermentation as their main method of generating energy — even in oxygen-rich environments. This method of generating energy, coupled with a high glucose-processing rate to compensate for the low ATP-per-glucose output, is called the Warburg effect.

A new study by City of Hope researchers, published in Cell Reports on April 14, may explain why malignant cells prefer this less productive process.

"Dysfunctions in the mitochondria, the cell's energy-generating powerhouses, are linked to premature aging and cancer development. Meanwhile, other studies have shown that RECQ4 gene mutation is linked to these two classes of disease as well," said Yilun Liu, Ph.D., associate chair and associate professor in the Department of Radiation Biology and senior author of the paper. "Because RECQ4 produces an enzyme that helps synthesize mitochondrial DNA, I wanted to investigate the connection between RECQ4 mutation and mitochondrial function and if they have a role in the Warburg effect."

In this experiment, Liu and her colleagues looked for differences between cells with either normal or mutated RECQ4 genes. The latter is associated with a higher lymphoma risk, and researchers wanted to determine if their corresponding enzymes, also called RECQ4, acted any differently.

After multiple analyses, Liu's team found that the mutated RECQ4 enzymes are more heavily concentrated in the mitochondria and less so in the cell's nucleus. Further observations showed that this is done through bypassing p32, a protein that normally regulates RECQ4's transport between the two locations. Because the mutant RECQ4 enzymes lack the amino acids that interact with p32, they can freely move to and accumulate in the mitochondria without any restriction.

While this study provides important clues to solving the Warburg effect puzzle, Liu said further studies are needed on RECQ4 and p32 to better explain cancer's biological processes. Meanwhile, the findings could have potential in designing a test to screen for cancerous changes — via RECQ4 concentrations in mitochondria — or developing a therapy to block or reverse the RECQ4 accumulation process.

Additional support for this research came from the Elsa U. Pardee Foundation and Yale Comprehensive Cancer Center Pilot Research Grant.