New Study Describes What Happens When the Brain Is Artificially Stimulated 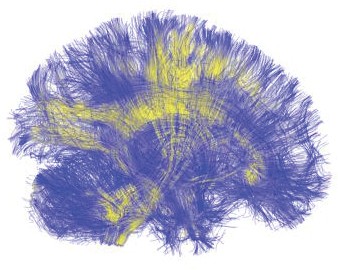 A visualization of the brain, reconstructed from MRI scans, shows tracts of white matter connecting different regions of the brain to one another. A new study that uses computational modeling to investigate brain stimulation finds that stimulating network hubs - areas of the brain that are strongly connected to other parts via white matter - results in the global activation of many brain regions.

Newswise — BUFFALO, N.Y. — Stimulating the brain via electricity or other means may help to ease the symptoms of various neurological and psychiatric disorders, with the method already being used to treat conditions from epilepsy to depression.

But what really happens when doctors zap the brain?

Little is known about what makes this technique effective, or which areas of the brain should be targeted to treat different diseases.

A new study led by the University of Pennsylvania and the University at Buffalo marks a step forward in filling these gaps in knowledge. The research describes how the stimulation of a single region of the brain affects the activation of other regions and large-scale activity within the brain.

“We don’t have a good understanding of the effects of brain stimulation,” said first author Sarah Muldoon, PhD, assistant professor of mathematics in the University at Buffalo College of Arts and Sciences and a core faculty member in UB’s Computational and Data-Enabled Science and Engineering (CDSE) Program. “When a clinician has a patient with a certain disorder, how can they decide which parts of the brain to stimulate? Our study is a step toward better understanding how brain connectivity can better inform these decisions.”

“If you look at the architecture of the brain, it appears to be a network of interconnected regions that interact with each other in complicated ways. The question we asked in this study was how much of the brain is activated by stimulating a single region. We found that some regions have the ability to steer the brain into a variety of states very easily when stimulated, while other regions have less of an effect,” said Danielle S. Bassett, PhD, Eduardo D. Glandt Faculty Fellow and associate professor of bioengineering in the University of Pennsylvania School of Engineering and Applied Science.

The study used a computational model to simulate brain activity in eight individuals whose brain architecture was mapped using data derived from diffusion spectrum imaging, a type of brain image taken by an MRI scanner. The research examined the impact of stimulating each of 83 regions within each subject’s brain.While results varied by person, common trends emerged.

Network hubs — areas of the brain that are strongly connected to other parts of the brain via the brain’s white matter — displayed what researchers call a “high functional effect”: Stimulating these regions resulted in the global activation of many brain regions.

Stimulating regions in the subcortical network culminated in global changes, in which a diversity of areas within a subject’s brain lit up. Stimulating regions in the default mode network also led easily to a plethora of new brain states, though the patterns of activation were constrained by the brain’s underlying architecture — by the white matter links between the nodes of the network and other parts of the brain. Despite this limitation, the network’s agility supports the idea that the brain at “rest” is well suited for shifting quickly into an array of new states geared toward completing specific tasks.

In contrast to regions within the default mode network and subcortical networks, more weakly connected areas, such as in the sensory and association cortex, had a more limited effect on brain activity when activated.

These patterns suggest that doctors could pursue two classes of therapies when it comes to brain stimulation: a “broad reset” that alters global brain dynamics, or a more targeted approach that focuses on the dynamics of just a few regions.

The study confirms the findings of past research by Bassett and others on the controllability of the brain’s structural networks. In contrast to past work that used linear modeling to arrive at results, the new study employed nonlinear models that more accurately reflect the brain’s complex activity, Muldoon said.