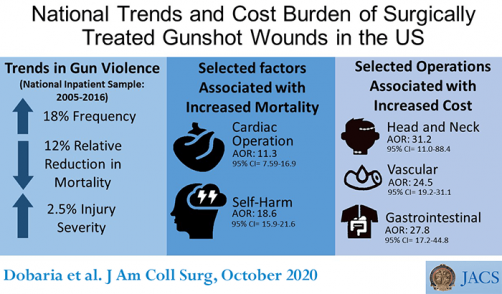 National Trends in the Cost Burden of Surgically Treated Gunshot Wounds in the United States.

Newswise — CHICAGO (August 10, 2020): The rise in firearm violence has coincided with an increase in the severity of injuries firearms inflict as well as the cost of operations to treat those injuries; policy makers must be more aggressive in addressing violence to curb these trends, researchers report in a large national study of gunshot wounds that appears as an “article in press” on the Journal of the American College of Surgeons website ahead of print.

“Taken together, our findings suggest that gun violence has increased in numbers, at least for the sector that meets surgical criteria, and that these injuries result in a substantial financial burden in addition to the obvious psychosocial burden and other downstream effects,” said lead study author Peyman Benharash, MD, MS, with the Cardiovascular Outcomes Research Laboratories and an associate professor-in-residence of surgery and bioengineering at the David Geffen School of Medicine at the University of California Los Angeles. “We hope that our findings are able to better inform policy in terms of violence prevention as well as reimbursement to hospitals, which are often in underserved regions, that care for these patients.”

The study authors note that gun violence overall carries an annual cost to the U.S. health care system of $170 billion, with $16 billion for operations alone. The researchers used the National Inpatient Sample (NIS) to identify all hospital admissions for gunshot wounds (GSW) from 2005 through 2016. The researchers did not look at all adult GSW victims admitted to the hospital, estimated at 322,599, but only at the 262,098 victims who required at least one major operation.

Dr. Benharash explained the rationale for the study. “We’re now seeing a lot more on the impact of gun violence,” he said. “In the past, gun violence was never really discussed in the open; it was thought to only affect a certain population. However, now we know that it affects everyone. In the hopes of trying to reduce it at a systemic level from top to bottom, we’re reporting, as surgeons, how gun violence in the patients that we treat has changed over the last decade.”

The costs for hospitalizations, measured as median costs adjusted for gross domestic product, increased more than 27 percent over the 12-year study period, from $15,100 to $19,200 (p<0.001). The amount of time these patients spent in the hospital—a major cost driver—also increased from an average of 7.1 days to 12.6 days (p<0.001). The percentage of fatalities declined, from 8.6 percent in 2005 to 7.6 percent in 2016, despite an annual increase in overall admissions for GSW-related operations, from 19,832 in 2005 to 23,480 in 2016. The severity of these injuries, based on billing codes, increased slightly over that period, with predicted survival decreasing from 81 to 79 percent (P<0.001). The authors used a non-parametric test for trends to judge the significance of temporal changes in their analysis.

The cost analysis categorized operations by type and three different cost ranges: low, medium and high, with average costs of $7,400, $17,200, and $58,800, respectively. “We found that compared with those who were not operated on, patients having head-neck, vascular, and gastrointestinal operations had increased odds of being in the high-cost tertile,” Dr. Benharash said. “Being in the Western United States was also a predictor [of being in the high-cost tertile], as was being of Black race and having insurance by Medicaid. So there are certainly disparities that are socioeconomic in origin as well.”

For example, the study found that while 3.4 percent of all patients had operations for head and neck injuries, these operations were disproportionately represented in the low- and high-cost ranges, accounting for only 0.81 percent of the former but 7.1 percent of the latter. “Gunshot wounds to the neck, for example, can be very costly because they can affect many delicate structures as compared with lower extremities, and these patients often require extensive hospitalization and a greater number of procedures” Dr. Benharash said.

The finding that costs in the West were higher is also important, Dr. Benharash noted, because it’s in line with what other studies have reported with other specialties. “It’s very important for policy makers and health services researchers to evaluate the disparities in cost,” he said.

The improved survival of GSW patients is a function of improvements in trauma transport from the field, better prehospital resuscitation, and improved techniques, patient management and adjunct therapies once they get to the hospital, Dr. Benharash said. “It appears that patients are reaching surgery more often because of reduced mortality before they get to the hospital,” he said.

The study also attributed these improvements in survival to efforts by the American College of Surgeon’s Committee on Trauma, including the Advanced Trauma Life Support curriculum and Stop the Bleed® campaign. The latter trains the public in techniques to stop life-threatening bleeding in everyday emergencies.

But those improvements don’t obviate the need for addressing the underlying problem, Dr. Benharash noted. “It’s very important to put it in perspective that this entity is quite economically burdensome,” he said. “If you’re looking at prevention vs. treating a gunshot wound from an economic standpoint, it would make sense to invest in anti-violence interventions that can reduce assaults that are often preventable.”

Suicide is another issue that must be addressed, he added. “The group of patients who self-harmed actually had the highest mortality overall,” Dr. Benharash said. “This situation points again to the need for better mental health access that hopefully leads to a reduction in suicide attempts.”

Dr. Benharash and coauthors have no relevant disclosures.

About the American College of Surgeons The American College of Surgeons is a scientific and educational organization of surgeons that was founded in 1913 to raise the standards of surgical practice and improve the quality of care for all surgical patients. The College is dedicated to the ethical and competent practice of surgery. Its achievements have significantly influenced the course of scientific surgery in America and have established it as an important advocate for all surgical patients. The College has more than 82,000 members and is the largest organization of surgeons in the world. For more information, visit www.facs.org.