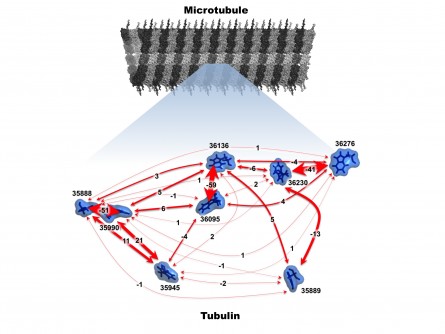 Newswise — Are the mysteries of quantum physics and consciousness related?

A fierce debate has raged for decades over whether quantum coherence can occur in the brain to support the conscious mind. In the mid 1990s British physicist Sir Roger Penrose and American anesthesiologist Stuart Hameroff proposed that consciousness depends on quantum computations in microtubules inside brain neurons. The proposal has been viewed skeptically, and harshly over the years, as technological quantum computers require isolation and extreme cold to avoid ‘decoherence’ by thermal vibrations. The conventional wisdom has considered the brain far too “warm, wet and noisy” for seemingly delicate quantum functions.

But nature is resourceful. Photosynthesis, the ubiquitous and essential mechanism by which plants produce food from sunlight, has been shown since 2006 to routinely utilize quantum coherence at warm temperatures. Photons from the sun are absorbed within plant cells, the collected energy then transported through a protein to another region for chemical energy and food.

It turns out that the collected photon energy is first converted to electronic excitations in distinct intra-protein ‘chromophores’, each an array of ‘pi’ electron resonance clouds, and then transported as electronic excitations (‘excitons’), dipole couplings or ‘resonance energy transfers’ which ‘hop’, or spread through the protein, not just from one chromophore to another, but among all chromophores at the same time in quantum coherent superposition! Heat in the form of thermal vibrations pumps, rather than disrupts, quantum coherence, the end result being highly efficient conversion of sunlight to food, extremely important to life on earth.

Back in the brain, microtubules are components of the cytoskeleton inside neurons, cylindrical lattice polymers of the protein ‘tubulin’. Microtubules are theorized to encode memory, regulate synapses and act as quantum computers generating consciousness. The latter claim has been criticized, but now it appears quantum mechanisms eerily similar to those in photosynthesis may operate in tubulins within microtubules.

In an article published September 17 by the Journal of the Royal Society – Interface a team of scientists from Nova Southeastern University and the University of Arizona in the US, and the University of Alberta in Canada used computer simulation and theoretical quantum biophysics to analyze quantum coherence among tryptophan pi resonance rings in tubulin, the component protein in microtubules.

Professor Travis Craddock of Nova Southeastern University and colleagues mapped locations of the tryptophan pi electron resonance clouds in tubulin, and found them analogous to chromophores in photosynthesis proteins.

Craddock’s team also found that resonance transfer between tryptophans in adjacent tubulins is plausible, e.g. along the microtubule length. This implies the likelihood of quantum coherent states extending through mesoscopic and macroscopic lengths in microtubules.

Along with recent evidence for coherent megahertz vibrations in microtubules, and that anesthetics act to erase consciousness via microtubules, quantum brain biology will become increasingly important.

Professor Jack Tuszynski of the University of Alberta, senior author on the study, “If a potato or rutabaga can utilize quantum coherence, it's likely our brains could have figured it out as well.”

Journal of the Royal Society – Interface